We are at full bloom. If you want pollen let me know ASAP. I will gather some when the rains stop. Send me a mailing address. I am simply ldavis and the place I am at is ksu.edu

I highly recommend this pollen. Fertile F1 foetida genes are not to be sneezed at.

If you are looking for something different and do not want to add to your stable of roses, fresh pollen is one of the easiest ways of finding something new. Minimal effort. Just use it on anything that is in bloom. I did this 2-3 yrs ago with Carefree Copper and although I got quite a few (would have been) 8ft tall once bloomers with thorns from hell, I also got 3 keepers-nicely shaped repeaters, heavy bloom, fast repeat, very full flowers in 3 different colors. I second Don’s recommendation. And there was not a whole lot of blackspot in the bunch. Just throw those out.

The the closer to the foetida species (Rosa foetida, Austrian Copper, Harison’s Yellow, Persian Yellow, Hugonis, H. persica) your hybrids are the greater their carotenoid pigment density and stability will be. One half of Carefree Copper is Austrian Copper. This is it on the right. 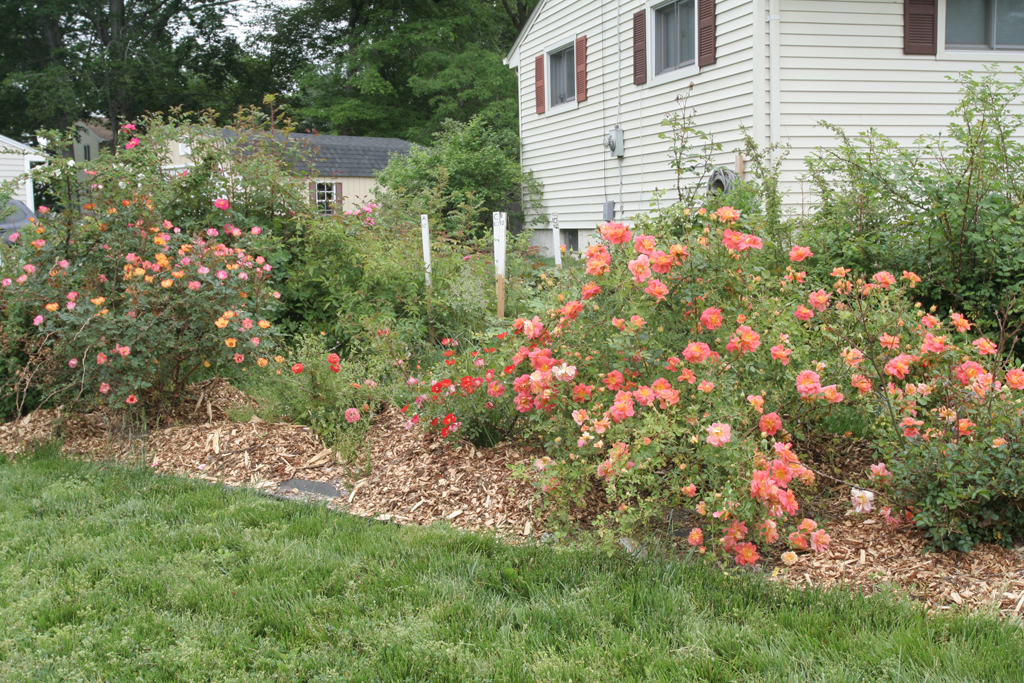 Pollen just got here this afternoon. Took 4 days to get here! I put it in the freezer, immediately. Fingers crossed (two days of rain expected).

Did some pollinations today with the Carefree Copper pollen you sent, Larry, but sadly, the pollen doesn’t look to me like it made the 4 day trip alive, as it has lost it’s color. I generally consider that a sign that it’s not viable anymore, but we’ll see if I get hip set. The weather has been cooperating and has stayed under 85. I have very few blooms in the garden right now, since all of the bushes are covered in fat hips. I’ve never had such a high take! Out of 110 pollinations, probably 10 didn’t take and those were all ones that were long-shots, or obviously bad pollen. With all the open-pollinated hips, I’ve calculated I’m looking at an estimate of about 47,000 seeds maturing. EGADS! I may need you all to fly out here to help me!

The mails are so slow lately. Next time you should send by overnight mail and I will reimburse you, Larry. Anyway, thanks!

You get 470 seeds per pollination, Judith? Is that to say that you have 100 unique crosses that took?
That’s very impressive, and sounds more than a little overwhelming… I’m not sure I could handle that many baggies of stratifying seeds, let alone seedlings!

How do you folks with those kind of numbers stratify and germinate so many seeds? I assume some folks are in climates where they can stratify in the greenhouse, but for those of us with less agreeable climates…

That’s 100 unique crosses PLUS a gazillion (take or leave a “ton”) of open pollinated hips that are ripening. 53 bushes with about 60 nicely maturing hips each x an average of about 20 seeds per hip, minus a 25% loss. Undoubtedly, I won’t get to them all. Purposeful crosses first, then specific OP ones that have produced good seedlings in the past, then new OP ones that I want to see. Then the rest will likely sit in the fridge until I’m sick of looking at them and toss them.

This is about where most of my maturing pollinations & OP bushes stand:[attachment=0]IMG_2638.JPG[/attachment] 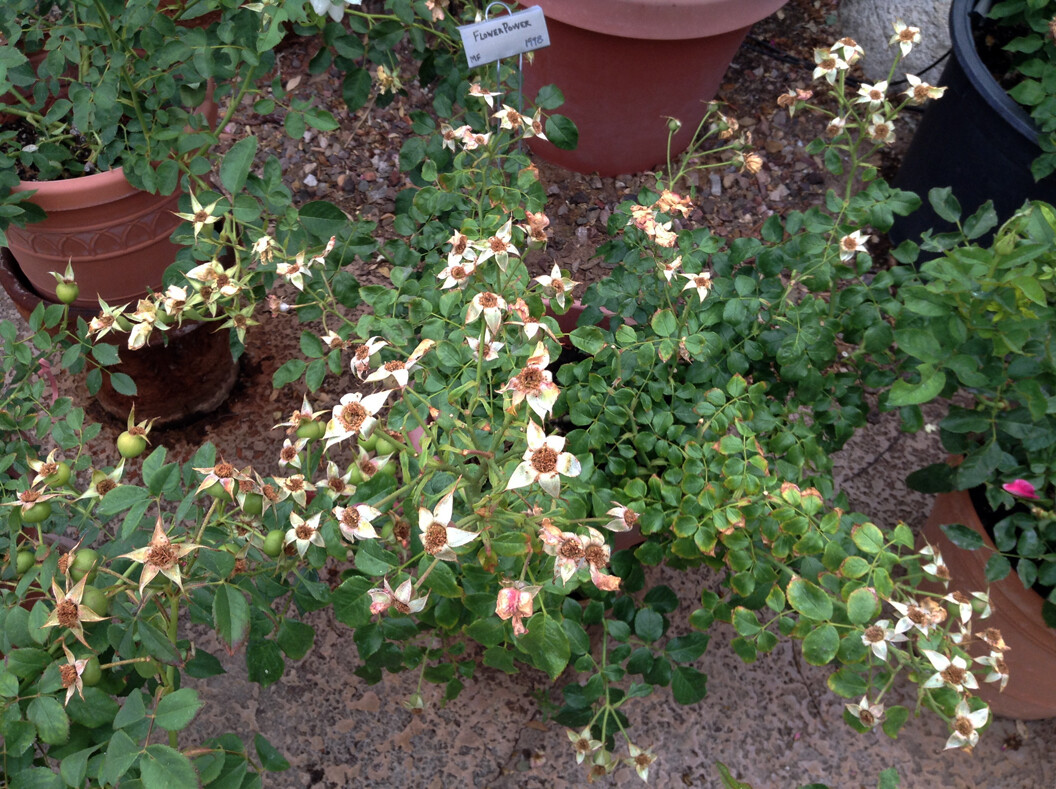 For many years I struggled to generate seeds. When I finally got seed production going it became a struggle to germinate them. Success at both presents it’s own problems. It’s a lot like the dog who chases cars day after day and finally catches one - now what?

I have developed a triage system wherein each cross is ranked by the degree to which it fits into my overall breeding objectives of which there are several. I process them in rank order and hold over those that don’t get germinated. Fully dried they keep in the refrigerator seemingly indefinitely although I have not yet braved freezing any.

Well, I cannot handle that many seeds, for sure. I think 10,000 is about my limit. I’m thinking there will be a bunch of OP hips going out in the mail to you guys in the fall.

Judith, I’ve never been able to link pollen color to viability. Not to say that it isn’t, but often I have stuff that looks pale, or sort of grey and it still works. I have used various pollens with positive results for a couple weeks anyway. Generally speaking I have enough to just keep on collecting it, but sometimes I have to make do with a fixed amount. I keep on until it’s gone. Some pollens fade seemingly overnight. Sorry the shipping took so long. Typically things arrive in 2 days. I can send some more pollen if you have the blossoms to try.


Philip, I stratify seeds with up to 100 per ounce of my nitrate soaked vermiculite. Each cross or treatment gets written on a re-sealable sandwich bag. I number the bags and write the info in a notebook.Then at about 1 mo intervals I transfer the germinated seedlings out into 6-paks. Last year I had close to 300 pkts with 8000 + seeds all in a few plastic boxes that spring greens mix comes in. Roughly 10 qt total of vemiculite. I write on the pkts the date and how many seeds I plant each time. Later I can tally up and graph the time-course for different treatments and CVs.

I need a bigger fridge! My wife is getting tired of the envelopes and baggies occupying a shelf.

Larry, I feel better hearing that you do essentially what I’ve always done, albeit with higher numbers. Do you ever nick your seeds in the theory of accelerating germination? Embryo extraction seems to take matters a bit far for my time, but I wondered if nicking would permit the flow of inhibitors, etc, and accelerate germination. (BTW, I think I sent you a PM some months back!)

I wondered if nicking would permit the flow of inhibitors, etc, and accelerate germination

I always respond to a PM, if I receive it. Try again. As Don said, nicking probably makes no difference. You’ve got to get rid of the inner husk whatever it’s called. The hard outer pericarp seems relatively permeable, but the chemicals in the endocarp? are hard to disperse or cancel out.

the chemicals in the endocarp

I’m firmly of the opinion that any inhibitors in the endocarp are artifacts and that the testa is where all that action is. The brownish yellow colored compounds in the testa are concentrated carotenoids that form a reserve of precursor for abscissic acid. The inner layer of the testa is enzymatically active providing a low, steady state concentration of abscissic acid that leaches into the embryo to maintain dormancy.

Yes, testa is the word I was looking for- the layer inside the hard outer layer(s).

Judith, I’ve never been able to link pollen color to viability. Not to say that it isn’t, but often I have stuff that looks pale, or sort of grey and it still works. I have used various pollens with positive results for a couple weeks anyway. Generally speaking I have enough to just keep on collecting it, but sometimes I have to make do with a fixed amount. I keep on until it’s gone. Some pollens fade seemingly overnight. Sorry the shipping took so long. Typically things arrive in 2 days. I can send some more pollen if you have the blossoms to try.

Wow, pollen that’s weeks old? I didn’t know it could last that long. I have used the Carefree Copper pollen on several blooms so far, and the rest is in the freezer until after this rain stops. Typically, I don’t get any take after about May 5th but this year has been cooler. If it continues, and I get some blooms, I will use the rest. I have very few blooms atm, so probably not worth sending more pollen. Maybe we could try in September if you get blooms then? Is that too late for you?

Judith, your CC pollen stored in the freezer will work years from now.