Can anyone recommend a climbing rose for a pot?

Can anyone please recommend a climbing rose suitable to grow in a pot, preferably scented, disease-resistant, repeat flowering, and non-nodding (stems strong enough to support the flowers so they don’t droop).

Height wise, maybe about ten feet tall, but height is less important than whether it wouldn’t outgrow a pot. (I am constantly searching for very large pots).

I really hanker after scent, but it seems to mostly come with roses that are bred to “nod”, which is a non-negotiable no for me.

I actually prefer single or semi-double flowers rather than fully double, not just because they are less liable to “nod”, being less heavy, but I want the pollinating insects to be able to access them.

I am on the South coast of England, so cold hardiness isn’t especially needed. We have mild winters and cool summers, rarely have snow and the temperature mostly stays above zero degrees Centigrade (the freezing point of water), so frost is rare. Roses typically are still flowering a bit up to about late January, and then start again in March.

Edit: I have looked at so many roses online. Climbing Blue Moon looks interesting 'Blue Moon, Cl.' Rose
It genuinely seems to have strong fragrance. I know nothing about its disease resistance. I am not familiar with these huge hybrid tea flowers, having tended to stick to smaller flowers of miniatures and semi double flowers. Or how it would cope being in a pot? Would the bees like it?

Or Climbing Summer Wine 'Summer Wine' Rose
It seems to be described as having strong fragrance. Only downside it is described as once flowering, then sporadically or occasionally a bit.

Try ‘Softee’ a small climber that will certainly grow in a pot. small flowers, repeat flowering, fairly disease resistant. Might be hard to get in the eastern states. good luck

Julie, look at Blue for You. It’s not a climber, per se, but it IS a very vigorous shrub which flowers constantly in incredible colors with an outrageous scent! To my nose, it’s heavily spiced Honey Crisp apple. Carolyn Supinger, who was the office brains, among many other essential titles and jobs at Sequoia Nursery for decades, used to make soups, jams, jellies and all other manner of confections and wonders and won prizes at the County Fairs with them. Her spiced Honey Crisp apples were one of my absolute favorites and Blue for You smells just like her apples tasted. In the ground, you can easily get five, six or perhaps even a bit more feet of growth from it. While not up to the ultimate of ten feet for your desires, it’s a quite healthy, fairly ever-flowering, marvelously scented, open flower (good for pollinators!) with gorgeous foliage and AVAILABLE in the UK.

I wonder if Barni’s “Brise Parfum” (Parfum d’Evita, or Perfume Breeze) would fit the bill for you, if large cut flowers aren’t of importance. A horrid name (sounds like an aerosol deoderizer) but gets pretty high marks in Europe. It has been introduced stateside by Certified too.

I wonder if Barni’s “Brise Parfum” (Parfum d’Evita, or Perfume Breeze) would fit the bill for you, if large cut flowers aren’t of importance. A horrid name (sounds like an aerosol deoderizer) but gets pretty high marks in Europe. It has been introduced stateside by Certified too.

Thanks for these suggestions. I looked up Softee, but it doesn’t seem to be available in the UK. Brise Parfum sounds nice, at least it has perfume and is pretty. At the moment I am going off big flowers with high petal count, because so many have been floppy/“nodding”, with stems that aren’t strong enough to hold the flowers and stems that flop all over the place, usually at the moment the bud fully opens. Also I like pollinating insects, and space being limited not sure I want to give space to flowers they can’t access.

Roseseek, I already have a Blue For You, and yes it is the best rose I have ever grown. I would love to try to cross it with a miniature or climbing rose, and to keep its great qualities of fragrance, disease resistance, repeat flowering, gorgeous semi-double flowers that hold well on their stems, beautiful big red hips all autumn and winter, and attractiveness to bees.

I often wonder how climbers are produced, if they are just sports of ordinary shrub roses, or if they randomly occur in seedlings of ordinary shrub roses. I have a rose growing at the moment, from seed, that has a delicate climbing habit, two very long stems, it hasn’t flowered yet and I can’t remember exactly which seed it came from. Fingers crossed it will flower this summer.

Look at the Blue for You offspring on Help Me Find-Roses. That will give you some ideas of what’s possible. Unfortunately, Mr. James never fully disclosed the parentage of Eyes for You, but it’s a very good bet it’s closely related to Bull’s Eye, so it includes Blue for You. In fact, the 2009 RNRS reference on its Help Me Find page states Blue for You was used in creating Eyes for You. Blue for You is triploid and quite fertile, so it can make a wild array of results depending upon how its genes “split” and combine with those of its mate. There is a healthy dose of climber behind it through Summer Wine on its paternal side, which likely helps produce that magnificent foliage. Climbers occur in both mutations and seedlings. R Gigantea, the most impressive of “climbing” species, is behind Tea Roses and they were used to create Hybrid Teas and therefore floribundas, minis, shrubs, etc. How much of that influence may still exist in the gene pool? Wichurana makes great climbers and many of Ralph Moore’s minis had his 0-47-19 (Wichurana X Floradora) behind them, so MANY other breeders’ minis do, too. We all stand on the shoulders of who came before us. Just get to pushing pollen around and see what comes of it. Do try to keep better records, please? You will have much less frustration of not remembering where some desirable trait came from if you have notes to refer back to. We’ve ALL be there! Good luck!

I ended up buying two bare root roses. One is Starlight Symphony, a climber, and the other is Jacqueline du Pre, a shrub. In the end I couldn’t decide between them, and I read that Jacqueline du Pre is being discontinued in 2022, and I didn’t want to miss out on it.

Can anyone tell me if the Jacqueline du Pre, photographs below, is supposed to have buds on the thicker stems. It has two thick stems with no visible buds, and a thin stem with a few buds.

Where do buds on rose stems originate? 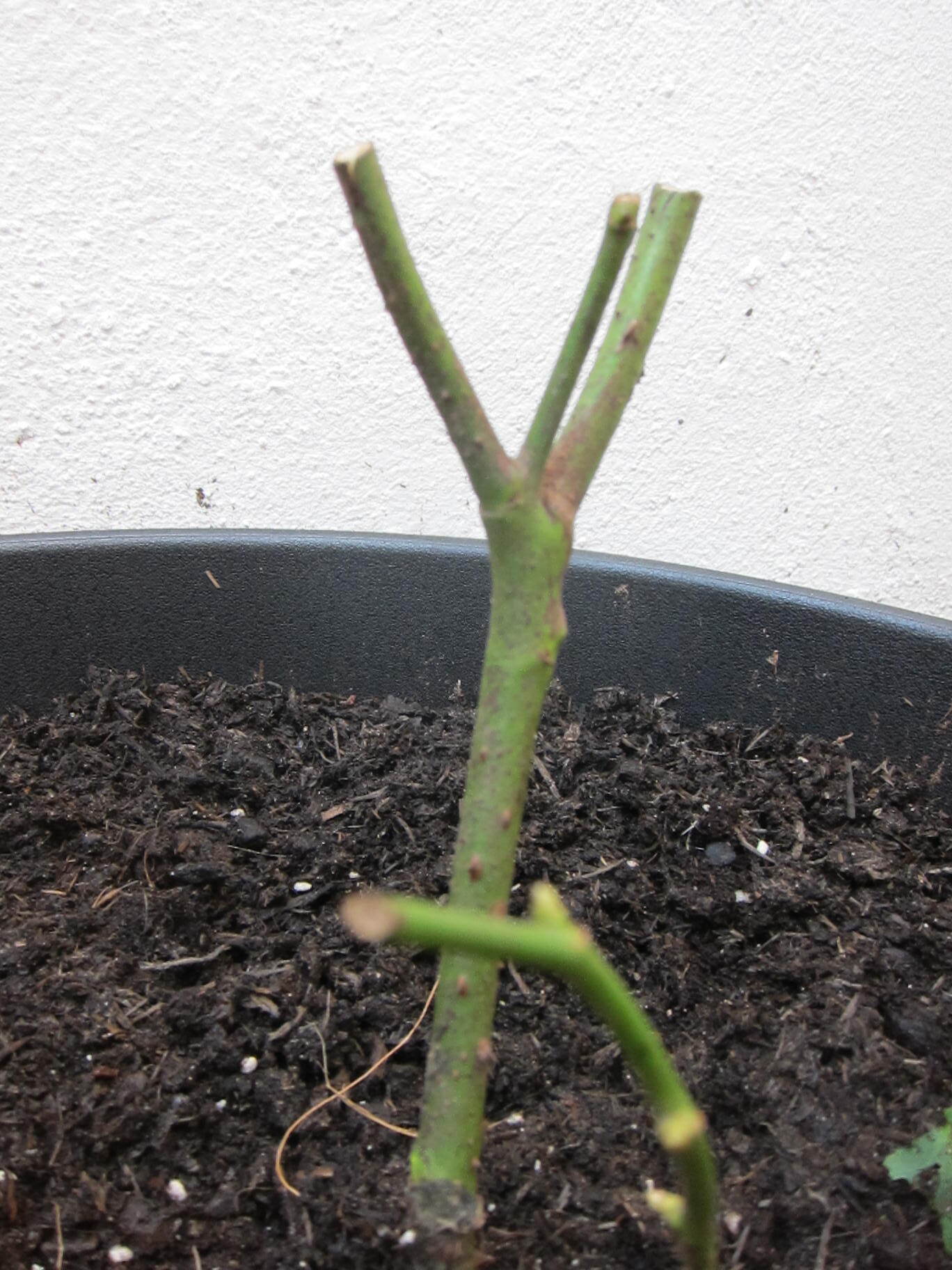 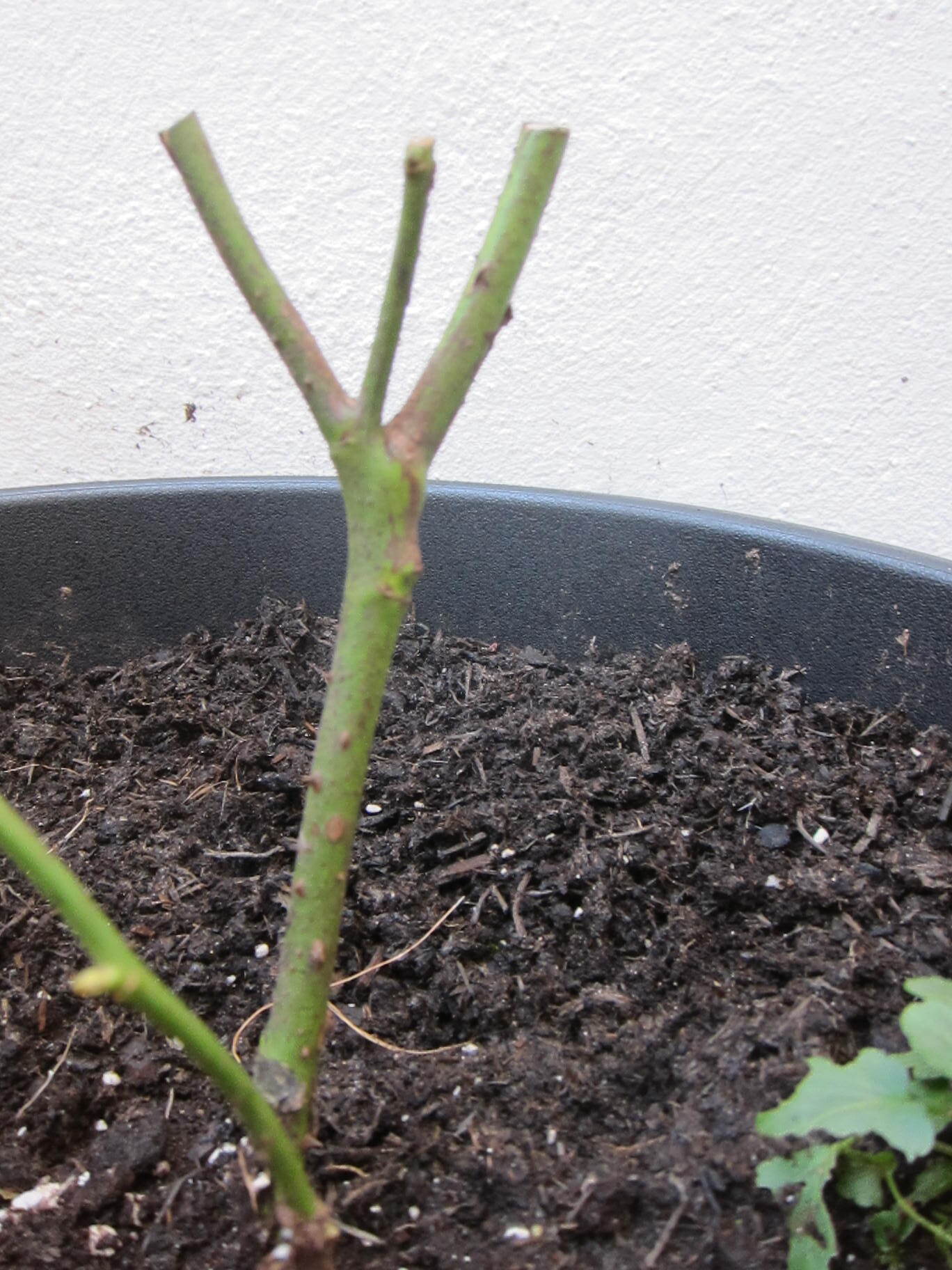 This is my Blue for You seedling. It is in full leaf in mid January, though its parent has lost some of its leaves. (I am constantly finding tiny snails, I think that could be what has been eating its leaves. Not sure using nematodes in summer would help, as they come in from neighbouring gardens all the time, and I have tried ferric phosphate pellets with limited success). 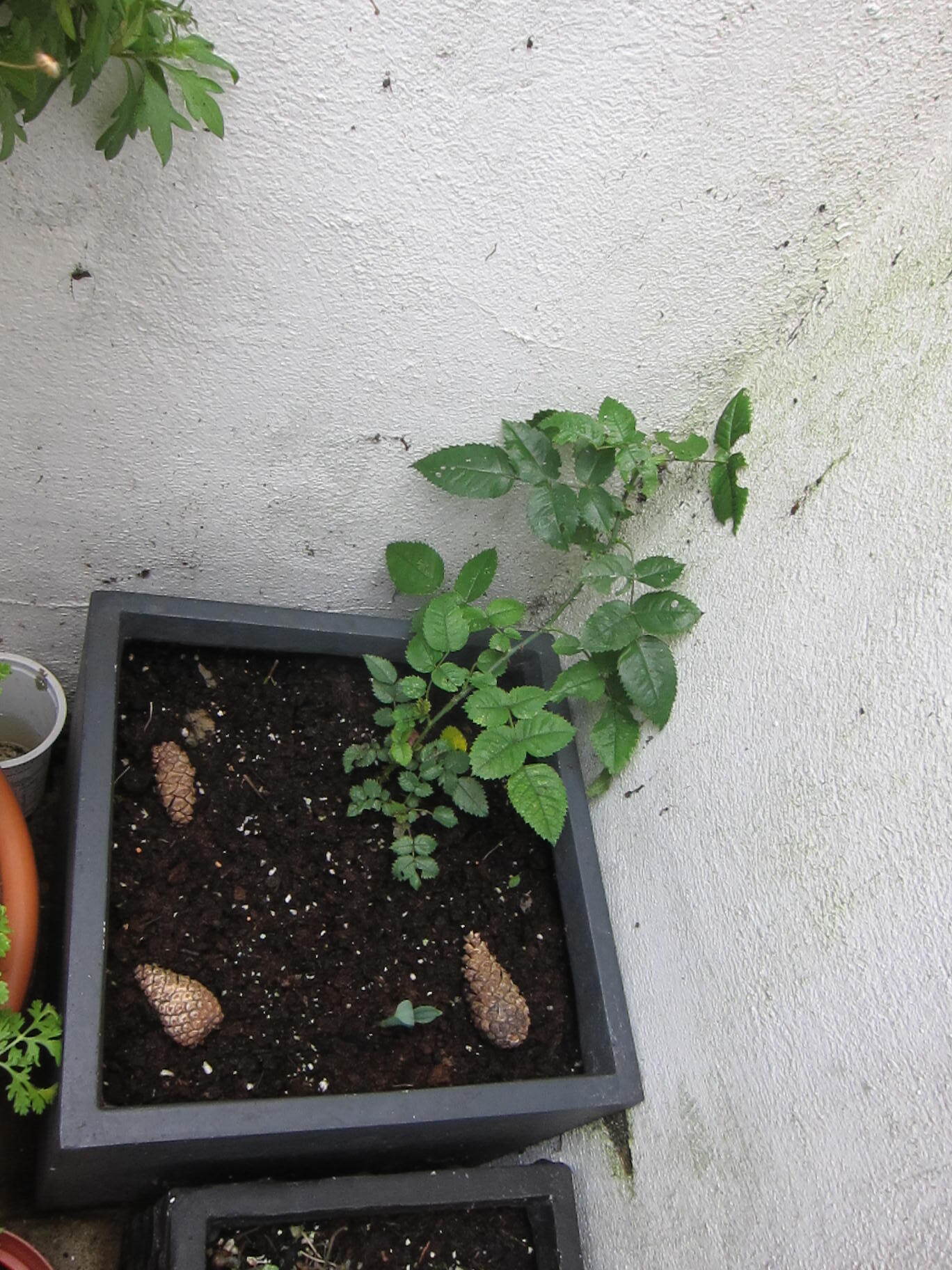 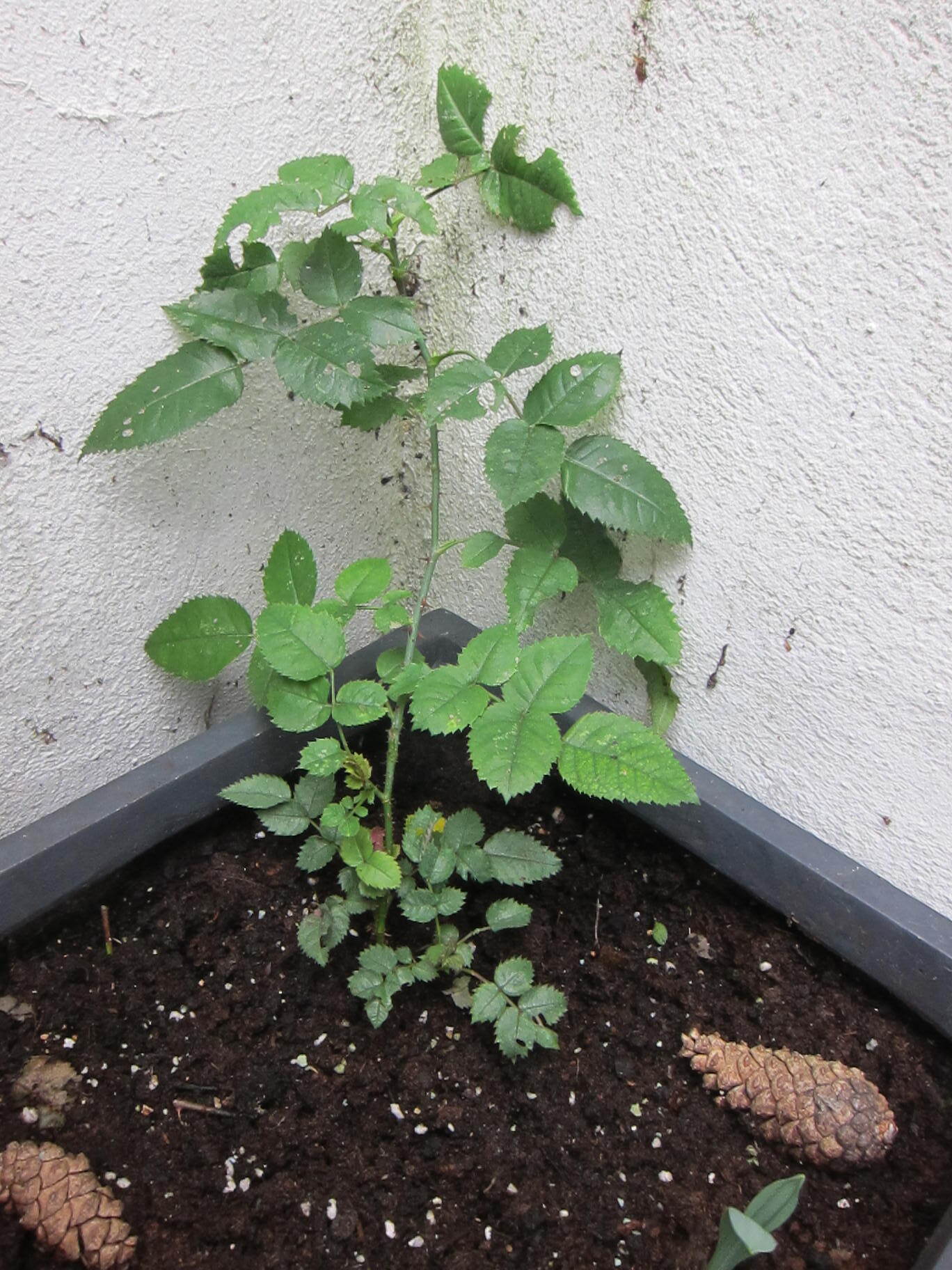 As long as you don’t have a dog which has access to the area, put your ferric phosphate pellets all around under the pots on the pavement beneath them and replenish each time they get wet. You may also need to spread them between that space and where they are coming from. I have found the pellets lose their effectiveness after getting wet. I mention dogs because they appear to LOVE the pellets. Mine prefer them to dog treats. Stupid animals. Snails and slugs will eat young rose foliage and growth tips.