Boston North Slump Over for Germination?

And how heritage appropriate, Pirjo’s Finn Mervialle op is first germination today. 120 days at freezing -1C, followed by 1 week at 19.8C in high humdity cadillac grow tray over potting soil and seeds in half inch pearlite layer … humid enough to get algae / moss on pearlite. 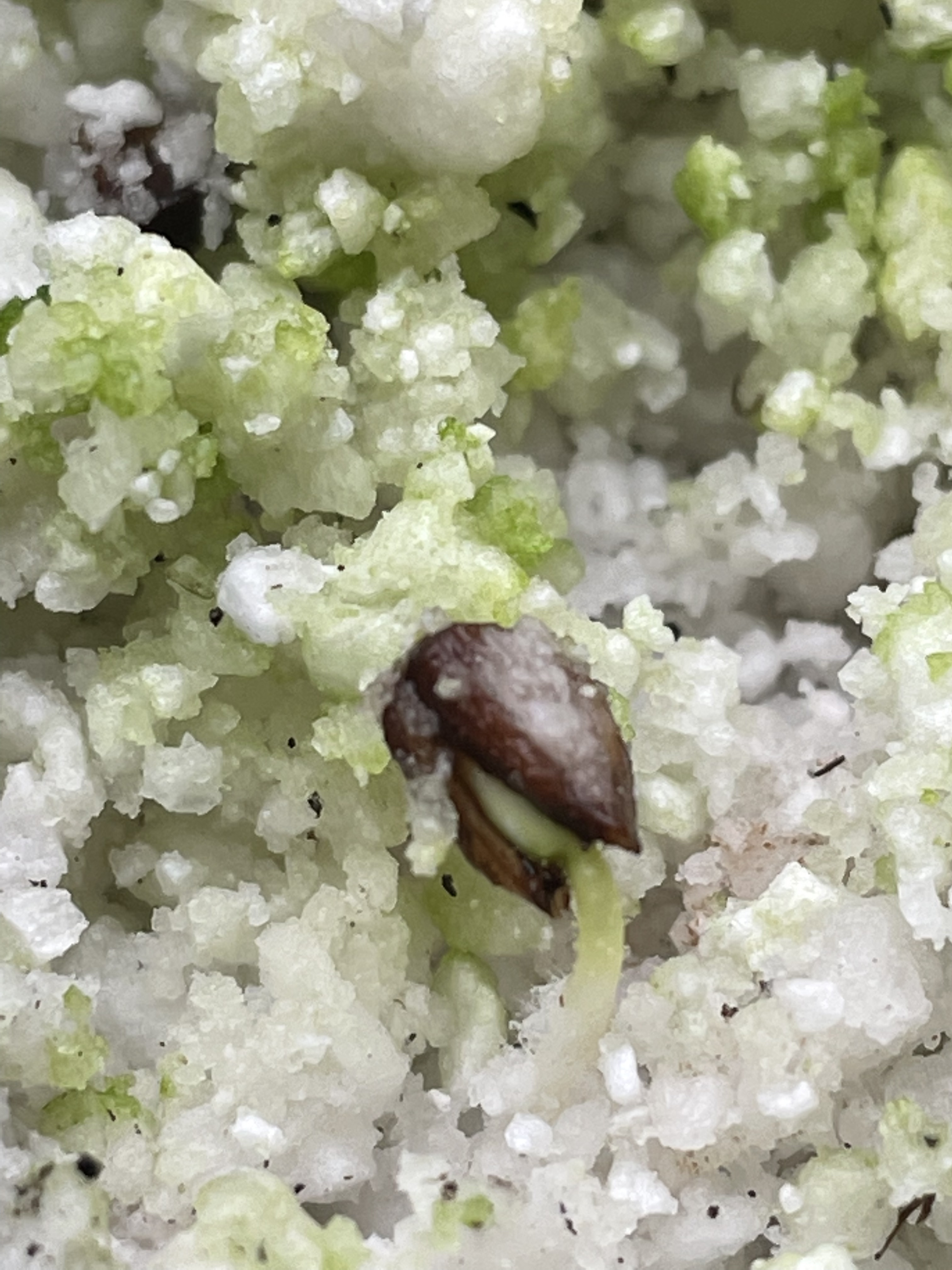 Congrats! It’s interesting that you let your seeds freeze, much less for such long periods of time, during stratification–is that a strategic choice?

I tried to delay my germinations this year by waiting longer to start stratifying my seeds, because I had a lot of other plants taking up space on the racks over the winter and was hoping to move some of them outside before dealing with an influx of rose seedlings. Unfortunately, quite a few of them decided that two months (at most) was plenty of time in the refrigerator, and the spring weather hasn’t been cooperating, so I’m still having trouble finding space for the seedlings.

Yes, it was a strategy decision based on rut frustration from dismal germination results, plus some pursuing of global methods, and proof, in areas where there is snow and ice. Decided on time and all temperature based (shock) change - rest normal method one reads about.

Harvested seeds after a couple of hard freeze and into baggies of damp pearlite. Maybe 100 to 150 ops of various hardy to zone 3-4 roses.

Normally kept temperature above freezing between 34 and 40"F" for “hardy” crosses and OP seeds … for a couple of months stretching to 4 to 5 and then toss them in frustration due to “0” or dismal germination. I had to test/change something.

Margit mentioned either Percy W, or Frank S, use to toss seeds to a ca, and stick them in the snow in spring. Then saw a post by a Finnish hybridizer “Rugosa” (Hannu T) who had amazing germination. If I read it right his posted picture were for crosses and he puts them in material in a “meatloaf - like” aluminum trays, and placed them outside for a Finnish west coast, Oulu region, winter (can’t remember if he buries). In spring moves them under a garden gauze like tunnel - still outside.

From these two methods ,I decided I was tilting at windmills stratifying “hardy” seeds above "0"C. That is not what nature does in zone 2,3,4 etc. in my books after top surface of the ground freezes to anywhere from few inches to feet.

So dropped to just below freezing (like snow temperature) - and stratified for a long time of 120 days below. - forget looking for germination in between - bags of seeds and and pearlite were as stiff as a brick in mini fridge from frozen water content. Then thought I will add a second shock, and thawed them reasonably slowing … one to two days at 40-45 F and then into the flames of the heat mats set at 19.8 C (+/- 3 C for mat controller inaccuracies). Also last early summer planted all the previous 2022 seeds failures just below ground surface and covered with sawdust. Will check in June as off to UK for May bloom.

As an aside, the second photo is indoors germinated seedling from spring of 2021. Planted outside in July 2021. First winter sailed through it, and even has a basal break.

Was suppose to be a cross of Prairie Dawn x 6810 - but that’s questionable due carelessness. Budding nicely and very tall for a year old and 80% of life outside. High hopes for it as a red climber - my goal.

For comparison the others are “field garden natural germinations” collected and put in the study plot. One or two show spino to my eyes as does the control seedling - hard to see.

And l may have eat my words as L 83 and Northern Yellow sailed through winter unprotected - lots of green cane and flexible buds. 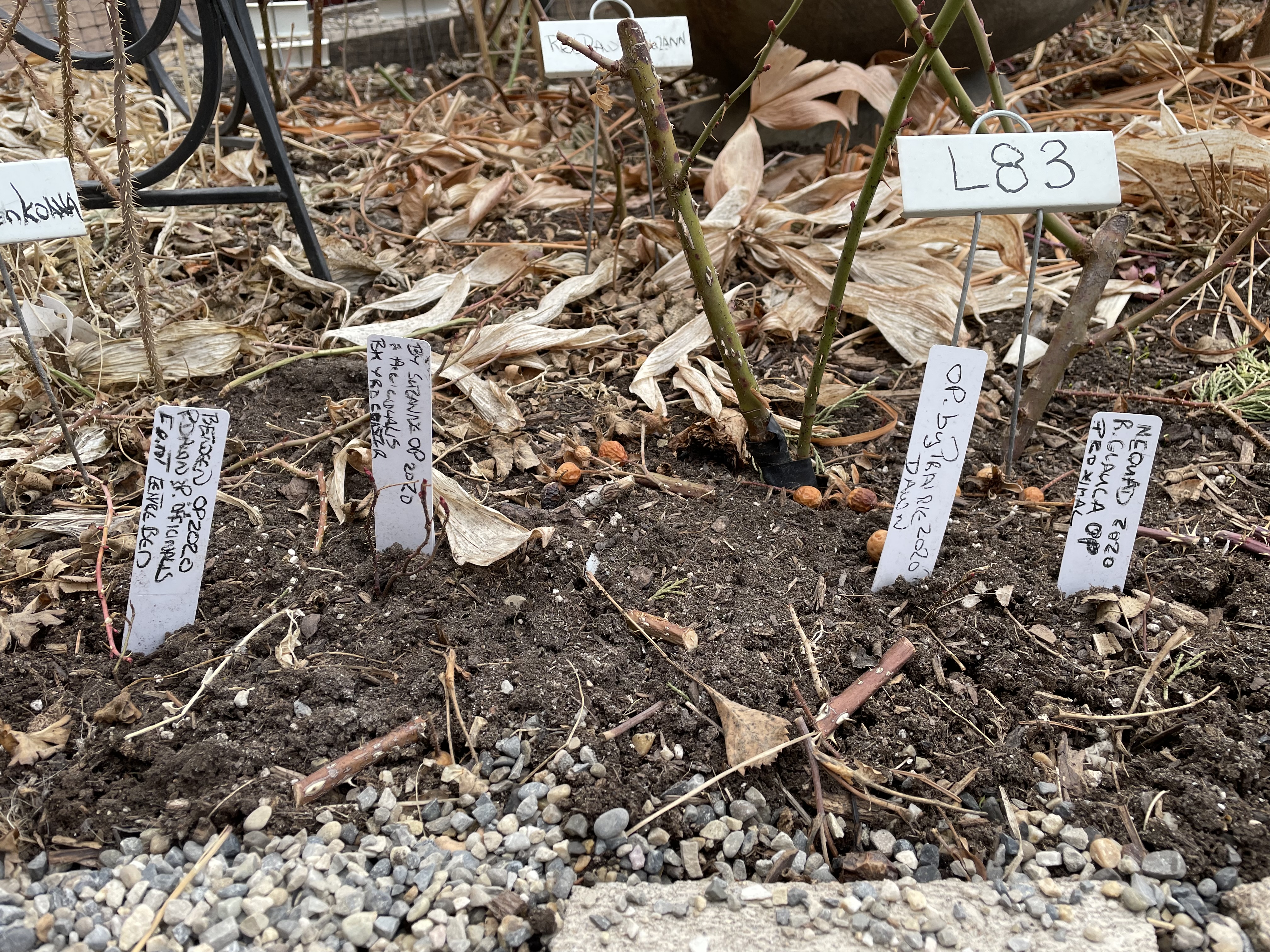 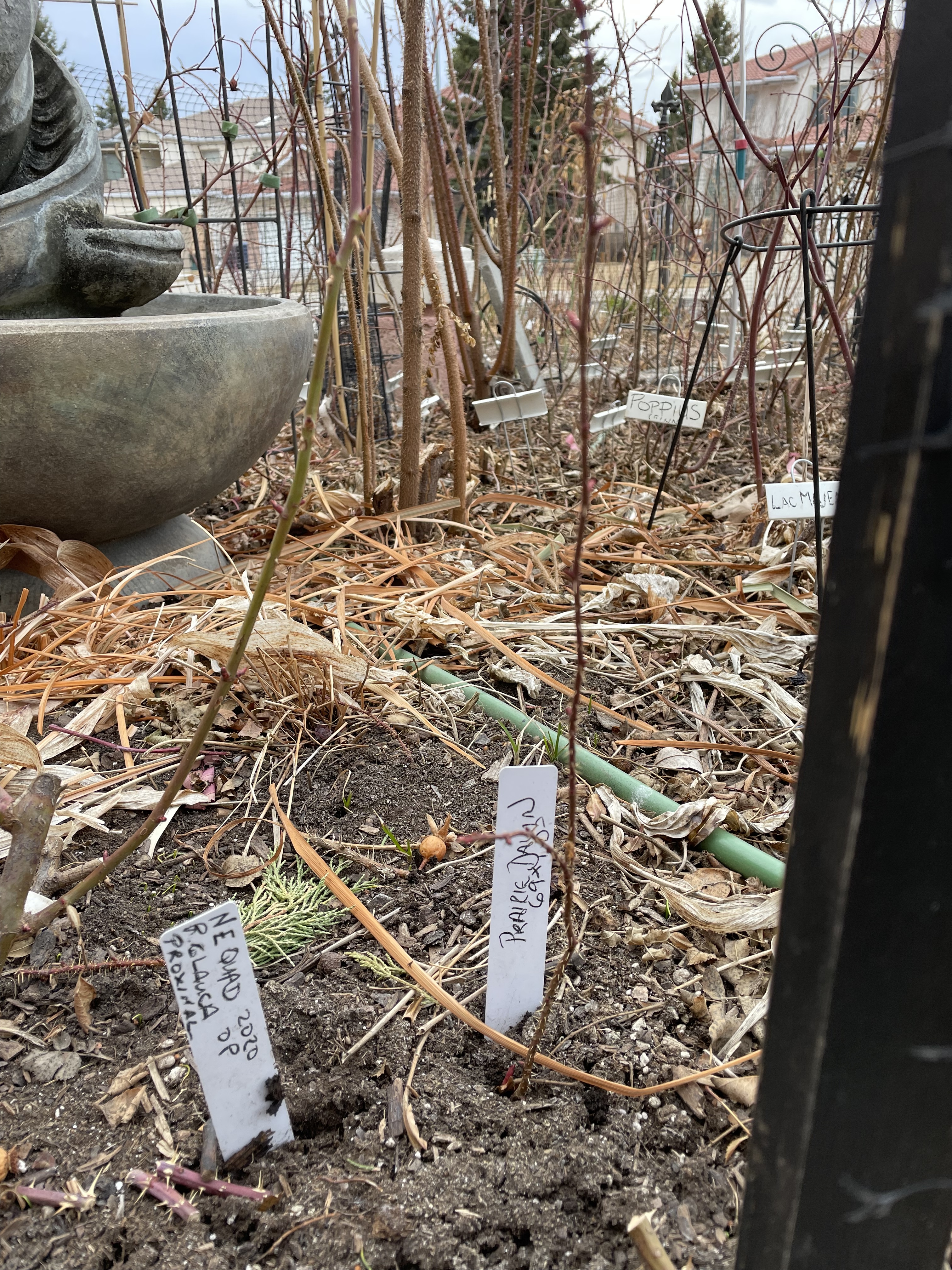 congrats on the germination! Hopefully more will soon follow.
Interesting to think of below freezing, but makes sense with cold climates.
Maybe I’ll test some when I hit seeds that won’t germinate in some more cold hardy of my crosses.
Duane

All the “garden germinated” are confirmed as seedlings when taken. Have one seedling I did not show that is very impressive at this stage. Has typical young yellow brown spino caning, but so far has excellent branching structure - some spinos tend to lack good branch definition. Used it to replace a passed Mackenzie. Also a yearly to my eyes.

R. xanthina seems happy with the technique changes, two germinations noted today. This could be the beginning of a traffic jam run to the germination pennant. Three germinations in two days … my cup runth over.

R. Xanthina (Knud source) is beckoning down a hybridizing test path this summer based on rut busting time and temp parameters change - excellent germination - half a dozen over 4 days - pulling ahead of in penant race.

Looking at HMF looks good for first and gen … criteria for interest … one parent at least demonstrated to me that it is germination friendly.

… which brings back Vince’s ghost “germination is not the only thing … its everything” … only appropriate Yoga wisdom that comes to mind would be deemed socially incorrect.

Inspected Central seeds - not much activity though start of germination looks to be happening (tip) - changed out potting mix and pearlite as too soggy for my liking.

Left the score board leaders alone.

This method seems to be working out pretty well for your Rosa xanthina, at least–which is not a small thing, since hardy yellow species can be some of the trickier ones to germinate.

I like the breeding potential of Morden 6910, and am trying to get it to tolerate my climate well enough to proceed.

Basically have as many germinations as taken cuttings for spring. And R. xanthina is hardy as spinossisimas here, and l am told even up in northern Saskatchewan.

No HMF records of decedents. Need to dig into why - but a negative answer will not stop trying to cross mother plant based on high rate of germination. Heres to hoping at least one the seedlings genetics has some influence of the roses around it.

Merveille has been protected for two winters and seen enough that best “hope” is some cane survival if protection removed, but questionable long tern blooming viability with no protection. About 15-20% loss under peat moss and water penetration protection. But color is worth effort if l can get it to pass on.

Going to use R. xanthina seedlings to develop a hedge of yellow along a bleak side of the house. Noticed W. Radler’s HMF photo shows an impressive one in his yard.

Changes in process variables for future? Will continue with “Life just Below Zero” conditioning for 90 to 100 days.

Only other variables come to mind are play statistics and greatly increase seed numbers per type and try “1st 2nd … “ gen examples. Might even try a rugosa or two.

6910 is not cane hardy in my garden but does make a 3-4 foot shrub that l make look like a mini climber using trellising. First years laid the three examples down in fall. Profuse bright red single bloom and to me whipy climbing canes that beg to be replicated in a hardy. Produces some very robust full bloom upright canes from suckers - don’t notice many basal breaks (my mothers bare roots - Cornhill). 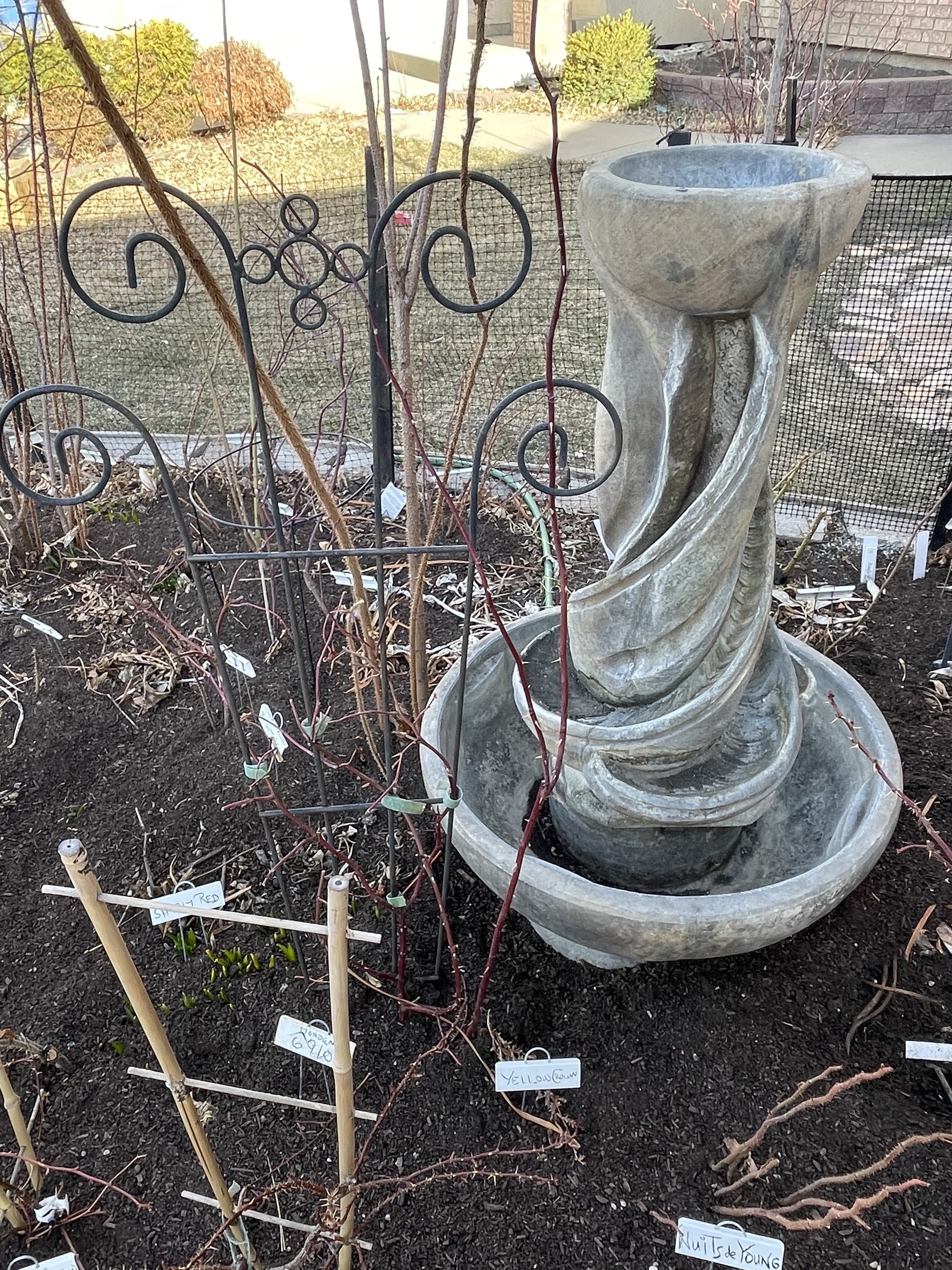 That doesn’t look too bad to me! The 6910s have been a little weak here right out of the gate, so I don’t necessarily think it is their fault. It could be as simple as the quality of potting medium used by the nursery that makes or breaks it as a young plant, and I should have done more to intervene in that regard. I’ll see if giving a little more attention to the soil mixture doesn’t improve things.

That seems like one to try crossing with S45, especially if you can get either one’s seeds to germinate.

I’m wondering if some of your so-far-unresponsive seeds might actually want more of a lengthy cool/moist stratification; I wouldn’t give up on them, but they might take another season if that’s the case. It’s even possible that the seeds that germinated well after being below freezing might have sprouted better than the others without any treatment at all, as one hears about every now and again from rose breeders in perpetually mild climates.

It looks like the few people who have reported working with R. xanthina have tended to use its pollen… maybe because it’s harder to get decent seed set the other way around, or possibly because of the perception that the seeds might not germinate as easily or reliably.

Good point about no above zero control case to compare against for absolute answer. Might try one next year.

I keep reading rumours about the hardies may require longer cold conditioning - or moist conditioning. No problem got lots of species and my crosses buried outside in another test plot last fall to test if this past winter made a germination difference. Harvested 2 yrs ago (2020) and first stratification above zero. Didn’t toss but buried in back for last winter.

This is the batch Prairie Dawn x ?6910? came from. I will leave the others from the 2021 unchanged (indoors) until end of June - then outside. There has to be something to extra long conditioning ( multiple seasons cycles for some hardies based my seedling natural finds in the gardens).

Ah ha, confirmed a couple things after return from prolonged garden absence, “Life … just Below Zero” … works better for me. Examined a second go around of germination duds from 2020/21 single stratification at 35F-40F c/w with a full summer outside in ground followed by a in- ground winter session at below zero. Seems to work better at below zero for germinating my hardy seed’s. Some - not lots, but at least a dozen - and that is a better performance than one germination at between 35-30F … weren’t many seeds but lots of types tried.

Return of say 12 germinations for second colder and longer stratification. Or 12 over 1 is a 12x better result than a single at 35-40F.

Lac La Nonne, and Suzanne seem to be most represented by germination. But excited by potential of a sidonie x altaica cross … except right at border with a species test plot so roll the dice is to what peat pot it was buried in.

They are Very small, so no proud glam shots yet…

None of the 2021/22 first pass duds with a 4 month stratification at below zero germinated during my absence while at room temp.

Errarum too warm is conclusion at 35F to 40F from my experience. Though reality check is even better method gives low germination rates on the whole for me. 20-25% of compatible crosses is more acceptable to me.

It looks like the few people who have reported working with R. xanthina have tended to use its pollen… maybe because it’s harder to get decent seed set the other way around, or possibly because of the perception that the seeds might not germinate as easily or reliably.

One factor is that it tends to be one of the first to flower. I got a bunch of seedlings (from seed from sheffields.com ) and they set op/finger poking seed fairly decently in their first year of flowering…but pretty much just closely related things in bloom at the time (eg hugonis, other xanthina seedlings, golden cheronese) (may have been some china/tea’s too, they tend to be in bloom all year here, just slower in the “winter”)

I had only three plants germinate out of the bag of seeds Dr. Byrne sent me. I figured I would use it for pollen because of the germination rate; the fact so many species appear to self pollinate very early so I could eliminate those selfs from the selection process; and it’s FAR easier to detect hybridity using species pollen on moderns than the other way around. So, I keep spreading Xanthina pollen.