Will phosphonate for damping off work with roses?

Abstract: “A formulation of phosphonate (AG3) was tested as a seed treatment for the control of Pythium damping-off of cucumber (Cucumis sativus L.) plants under controlled environment and field conditions. Cucumber seed were treated by soaking for 10 min in phosphonate soln. They were then planted into peat-based mix or sandy-loam soil mixed with Pythium aphanidermatum or P. ultimum inoculum or into muck soil naturally infested with P. irregulars, P. ultimum, and other Pythium spp. Under growth-room conditions, phosphonate seed treatment provided more than 80% control of damping-off in all infested substrates tested. Effective disease control was obtained even when treated seed were stored for 5 wk and up to 18 mo prior to planting. In microplots contg. naturally infested muck soil, phosphonate seed treatment decreased the percentage of diseased cucumber plants and increased total fresh wts. compared with untreated seed and phosphonate post-planting drench. In field-plot tests 6 wk after planting treated seed in Pythium-infested muck soil, cucumber stands were 63% compared with 18% in the control, which had no phosphonate exposure, and 53% in the post-planting drench. Tests for potential phytotoxicity in the greenhouse showed that radish and bok choy germination was reduced by phosphonate treatment but corn, cucumber, soybean, sugar beet, tomato, and wheat were not affected. Phosphonate seed treatment is a cost-effective way of protecting cucumber plants from Pythium damping-off.”

Title: Effects of AG3 phosphonate formulations on incidence and severity of Pythium damping-off of cucumber seedlings under growth room, microplot, and field conditions.

Abstract: “New formulations of phosphonates (AG3) were tested for their efficacy to control Pythium damping-off of cucumber seedlings in peat-based mix (P-mix), muck soil (Mu-soil), and sandy loam soil (SL-soil). Aq. solns. of various phosphonate formulations (0.035%-0.280% active ingredient (a.i.), v/m) were added to pathogen-infested P-mix or SL- or Mu-soils as a preplanting amendment or postplanting drench treatments. In artificially infested P-mix, preplanting amendment with powder or liq. phosphonate formulation provided control of damping-off and disease suppression that increased with the concn. of phosphonate. Higher rates (0.140 or 0.280% a.i.) provided almost 100% disease control whereas lower rates (0.035 or 0.070% a.i.) had on av. 34-75% healthy plants compared with less than 5% in the control. AG3 liq. formulation as a preplanting treatment also provided effective control in naturally infested Mu-soil and artificially infested SL-soil. Postplanting drench with AG3 was equally effective in all 3 soil substrates. AG3 applied as an amendment 2 wk prior to planting in Mu-soil was as effective as that added just prior to planting. Treatments made prior to 2 wk were less effective. AG3 also provided effective control of Pythium damping-off of cucumber seedlings under microplot and field conditions. The amt. and frequency of irrigation and rainfall can affect the disease suppression by AG3 phosphonate in the field.”

The full plant disease paper appears to be available free at the journal’s web site:

Recsearch proposals can often be very useful when attempting to learn about a new area. See: 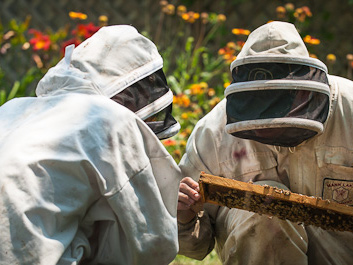 The College of Agricultural Sciences is a world leader in cross-disciplinary research, amplified by partnerships across Penn State and the international science community. Our reach is global but rooted in Pennsylvania—an agricultural state with...