Assume some sort of damage related, just interesting looking, like someone dropped some water on ink

Just kind of interesting how the reverse doesn’t really seem affected by the lighter reverse, while the purple is. 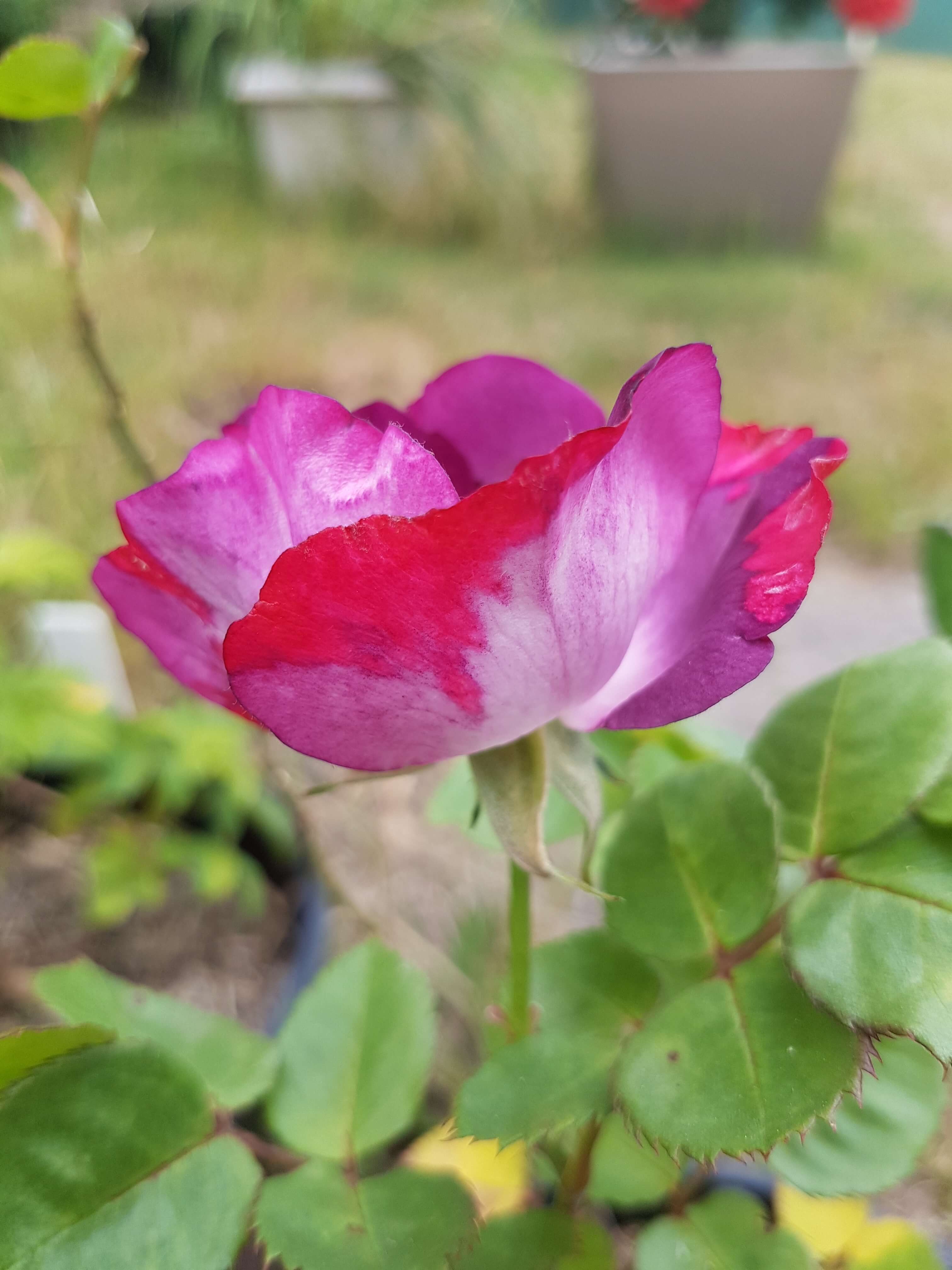 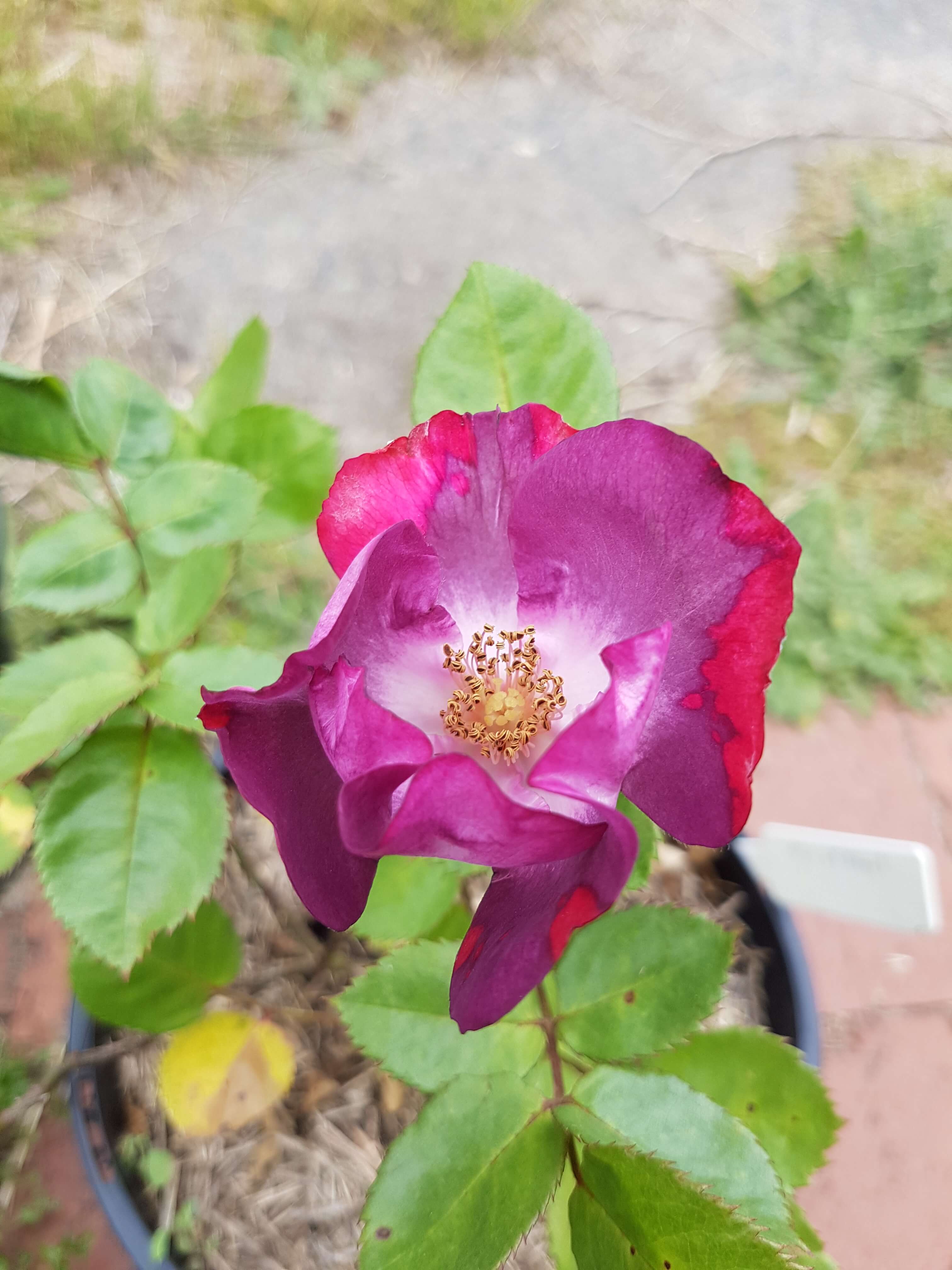 Is that a first bloom, or have you had “normal” blossoms already? Really cool, if it were to be remotely stable.

I don’t have any records of it blooming last year but it may have had some disease issue, caterpillars or dried out (shriveled up buds) that disfigured it in some way. I tend to neglect modern x modern…they’re time fillers of pigment (there’s only so much pink and white you can look at with species and ogr).


There’s a few others (Man of Steel x Blue For You) doing similar things. I assume it’s just weather/damage related in some way (spring is hot one day, cold the next) a lot of purples aren’t super stable here (eg Blue For You and Baby Faurax often make white blooms when it’s hot, Ebb Tide goes pink). Either way will see over the next couple of months with more stable weather.

I had some ‚Blue for You‘ seedlings doing this. It is in BfY line.

It’s also common with Veilchenblau, Baby Faurax, IXL and probably other “violet” toned sorts. This is an IXL bloom in my yard.

There’s a few others (Man of Steel x Blue For You) doing similar things. I assume it’s just weather/damage related in some way (spring is hot one day, cold the next) a lot of purples aren’t super stable here (eg Blue For You and Baby Faurax often make white blooms when it’s hot, Ebb Tide goes pink). Either way will see over the next couple of months with more stable weather.

I have never seen ‘Baby Faurax’ go white, but maybe San Jose, CA, didn’t get hot enough. I recall a “heat wave” that only got into the 90s F. On the other hand, on one occasion I found BF going almost egg plant-purple in cool, cloudy, damp weather. 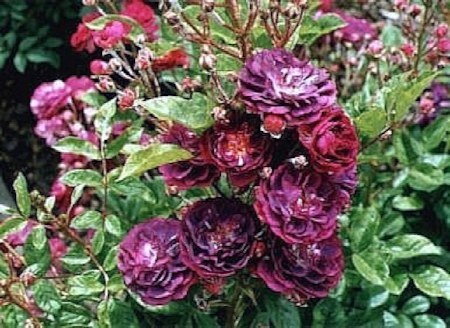 Journal of Genetics, 32: 117-170 (1936)
A Biochemical Survey of Factors for Flower Colour
Rose Scott-Montcrieff
“Variation from complex to normal anthocyanin pigmentation during the life of the plant has been noticed by the Robinsons, e.g. the flowers of Hydrangea hortensis contain a complex delphinidin glycoside at first, but this is found to be normal later in the season. Similarly, late grown Hyacinthus “King of the Blues” has not a complex pigment like that of the same variety grown early in heat. The most interesting case recorded is that of the rose “Veilchenblau”, which appeared to develop less blue-red flowers in the very dry 1934 season than normally. The bluer petals were separated and found to contain complex as well as normal 3-5-dimonoside, while the redder petals contained less of the complex pigment. It is possible that acylation is an important stage in pigment metabolism.”

Geschwind (1864) wrote similarly of his ‘Erinnerung an Brod’: “In not too dry summer and soil the large, densely filled, flat flower is almost purplish-blue or violet-blue, usually with a dark red heart, and it is the only rose in this color that sometimes approaches a true blue, it surpasses Reine des Violettes, Violacea, Dr. Hogg and others of similar color. Viewed a few meters away, sometimes an especially dark colored flower appears almost black.”

Years ago I took petal tissue and ground it with a prescribed amount of distilled water and took the pH of a number of roses that “blue” with age along with others that are a more stable pink or red. I also did some work with bigleaf hydrangea that changes color as well. The aging tissue that blued had a higher pH, as expected. Metal ions, sugar content, as well as pH impact how the anthocyanins look for final color. Sugars are part of the molecule and when plants are stressed and not able to produce enough energy, colors tend to be faded in part due to reduced sugars. It is interesting that for bigleaf hydrangea that is soil pH sensitive for flower color, it is low pH in the soil that triggers the blue range of the their anthocyanin(s) to be expressed. However, when that happens and they look more blue, actually the pH is going up in the vacuoles of the cells where the anthocyanins are located contributing to their blue hues developing. The inverse relationship between soil pH and vacuole pH is interesting.

It would be fun to learn if the unique color transition patterns on petals of your rose Plazbo can be associated with differences in pH.

David,
The color weirdness gets even wilder when there is yellow in the mix. 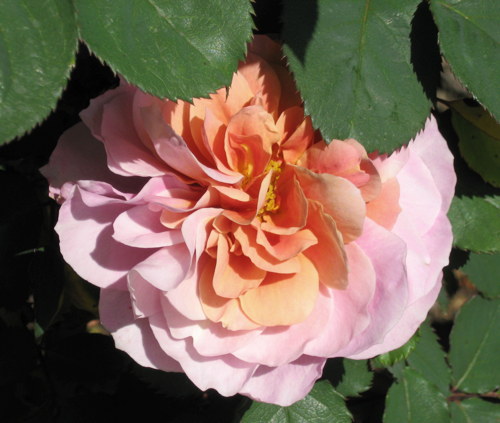 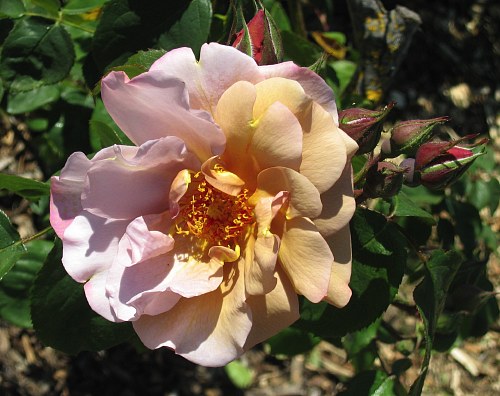 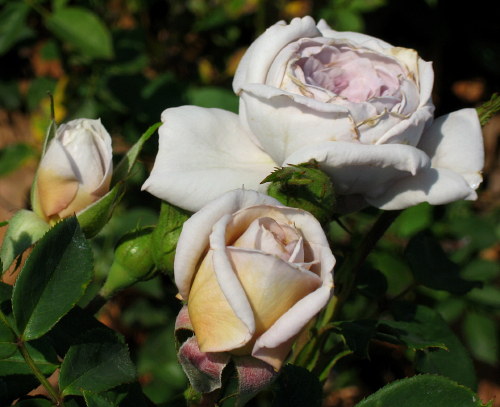 In the Newhall garden, where alkalinity could be quite high, Reine des Violettes, Blue Mist, Baby Faurax all suffered extreme bouts of chlorosis with the foliage and canes turning light chartreuse and the flowers expressing very pale pink to nearly white. The RdV was a heavily virused ROYAT plant budded on Dr. Huey, so it honestly shouldn’t have been so severely chlorotic. The other two were own root plants and likely not virused as the Blue Mist was never budded and the Baby Faurax was rooted from a Pickering plant which was indexed as they indexed everything they offered. The only way to straighten them out was to amend with copious peat moss with heavy applications of Ironite for the West and regular feedings with MirAcid to even out the pH. Nothing else around them experienced the issue. That is what was so exciting about finally obtaining Cardinal Hume and International Herald Tribune…the original imported plants on their stocks were impervious to the soil and water issues as were the numerous own root plants produced from them.

These are old pictures … before I got a digital camera … so I don’t have a date. 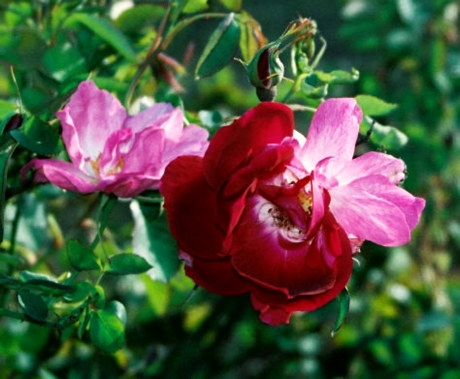 This unudual velvety crimson was open the same day. 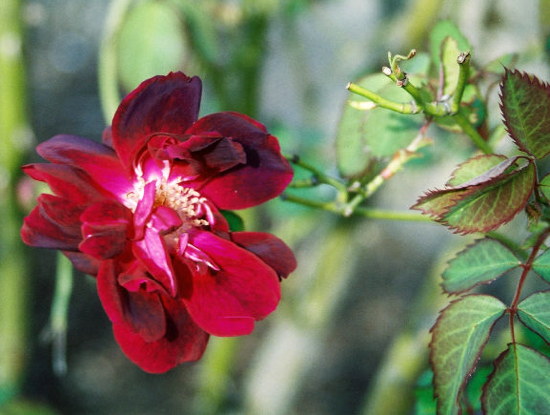 La Sylphide (Same roll of film as above)
Odd color 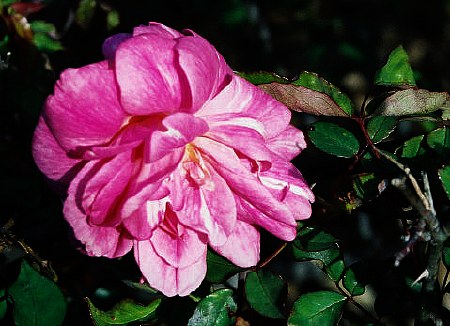 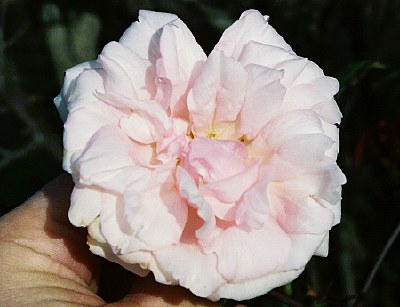 The above four pics were taken the same day at the San Jose Heritage. 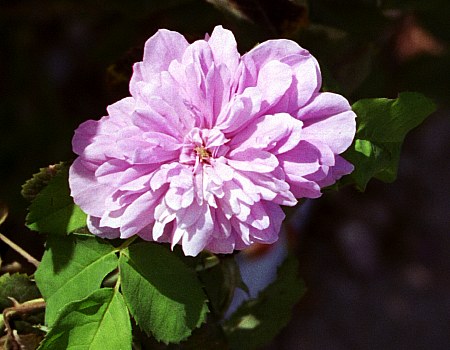 I have never seen ‘Baby Faurax’ go white, but maybe San Jose, CA, didn’t get hot enough. I recall a “heat wave” that only got into the 90s F. On the other hand, on one occasion I found BF going almost egg plant-purple in cool, cloudy, damp weather.

It’s not a common occurrence like with Blue For You that seems to have a white (or close to) period each year, last year Baby Faurax was fine with the La Nina influence and general wet conditions. So may not be strictly heat but a combo of heat and water. Previous years was multiple heat waves reaching 100F to 114F lasting upwards of a week at a time and general drought conditions. I do agree that Baby Faurax is a deeper purple in cooler wet conditions, always hoping one of it’s seedlings will pick up that colour is a more stable form.

Baby Faurax has always gone more pink (like the other multiflora based violet roses) for me in the heat. It went white due to lack of iron. Acidifying the planting area and heavily dosing it with iron cured the problem.

I agree that pH can be an issue, bot not always in the same way. In Hydrangeas, for example, acidic soil allows the plants to suck up aluminum ions that link pigment to co-pigment for the brightest blue coloring. It is fascinating, if a bit unsettling, to see such a plant growing in a mixed but nearly neutral soil. Some flowers are light blue, others light pink, and many others of an odd pale purplish, greenish … whatever color. This demonstrates that the various stuffs a plant takes up through its roots do not always get mixed together on the way up. Some of the roots may be growing around limestone bits, while others are pushing through lumps of peat moss the owner had dug in. Some alkaline here, some acidic there, some neutral everywhere else.

Going through my pictures, I have only one ‘Sweet Chariot’ with the desired purple (leaning to violet) color. Lots of other pictures slow only dull pinks. I wonder if the color might be made more definite by crossing to another variety of the same type. It is a little surprising that SC’s pollen parent is reported to be ‘Violette’, a once-bloomer. No telling what the pollen of that might be.

While trying to find a pattern of inheritance of purples, I came across ‘Mme. E. Rocques’, bred from ‘Veilchenblau’ and ‘Reine des Violettes’. I can’t find a picture, but the color is described as violet, white stripes. Once upon a time, I had ‘Reine des Violettes’ and ‘Sweet Chariot’, which might have done as well in the purple contest.

There has been much research into the nature of blue (and purple) coloring in flowers. But much more is needed. This past week I came across one type that is new to me. At least the name is: Fuzzy metal complex pigments

Yoshida, et al: Blue flower color development by anthocyanins: from chemical structure to cell physiology (2009)
“In blue petals, metalloanthocyanins are relatively unusual, nearly all blue flowers resulting from non-stoichiometric metalcomplex pigments stabilized by co-pigmentation. These blue pigments are less stable than those of metalloanthocyanins — they are blue only in aqueous solutions, and the color disappears during isolation or crystallization. Therefore, clarification of the mechanism of blue color development by such ‘fuzzy’ metal complex pigments may be more difficult than for metalloanthocyanins.”

Hydrangeas are in this group, along with a purple and blue tulip, and the a sky-blue Meconopsis. The paper also gives a history of the research, with hints for future research.
http://bulbnrose.x10.mx/KKing/RosePigments/YoshidaBlues2009/YoshidaBlues2009.html

I have an interesting mauve climber/short pillar out of:

The seed parent was bred by Robert Byrnes. 'MBCdM' Rose It is of commercial quality, and he shared one with me for inspiring the cross idea. It is too bad it is not sold commercial. Great floribunda. Anyway, this seedling was silver cream handpainted purple. But…sometimes not. So I watched it for many years, and I still own it, and this is what I concluded. The weather while the buds are forming dictates what the blooms will appear as. If it is greater than 90F, the full blown blooms with be silvery cream with blushed-violet handpainting. If they formed in cool weather, the blooms will appear as silvery cream with purple handpainting. Further, the weather during blooming did not seem to dictate the density of the purple coloring in the blooms (other than typical UV degradation over days, but that is another topic).

No, but I will re-take some this summer. I lost 2/3 of all my data last Fall when my hard drive decided to lose faith in itself and self-implode.

Yikes…sorry to learn of your hard drive issues.

Okay, snagged some pics for your. It is VERY wet and very cool this spring. All sorts of colors on it right now. I placed 3 different blooms on my clematis for an easy pic to show the differences.

I have seen even darker purple and even lighter pink. It’s highly variable. 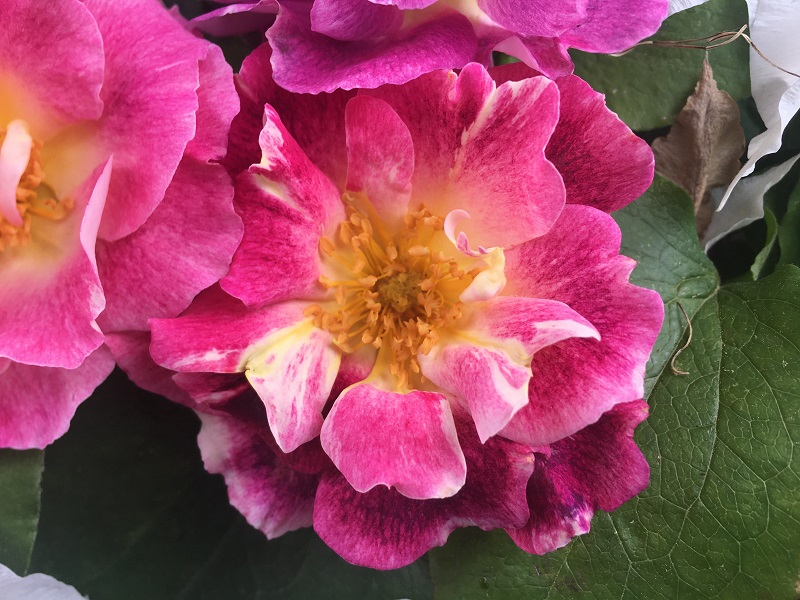 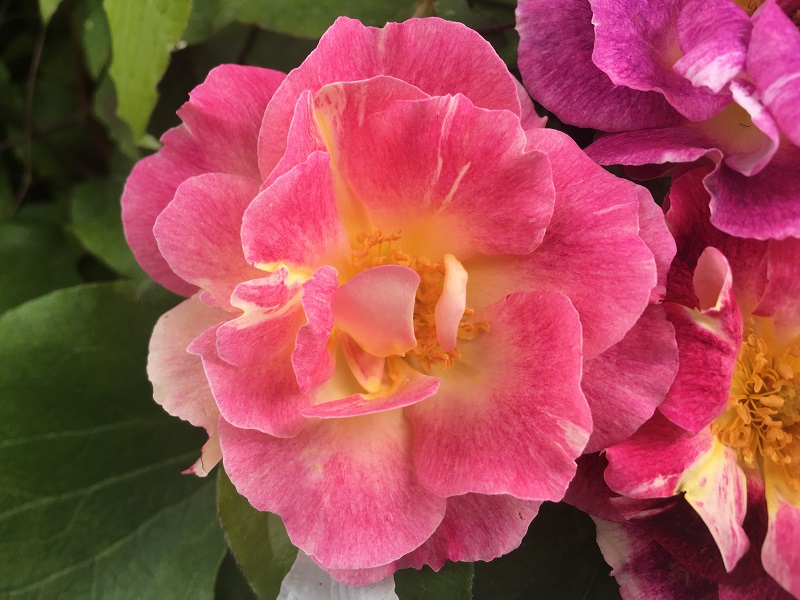 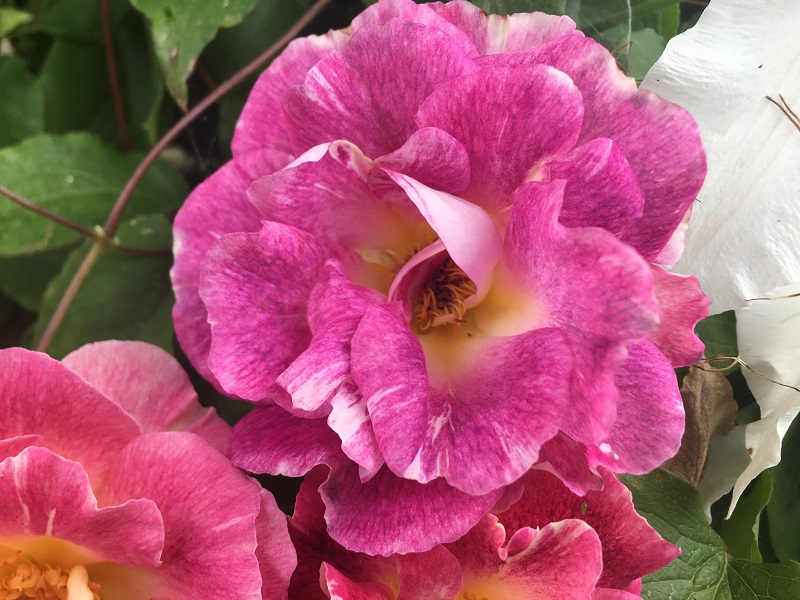