Anybody use any of these in your breeding and find anything interesting? Aside from musks, chinas like ‘Arethusa’ and ramblers, apricot is a tough color for the Mid-Atlantic for no-spray culture and I was thinking maybe they would be a good doorway to some good shrubs of similar coloring if crossed with the right thing. Anybody get anything good out of any of these?

I haven’t deliberately used any of them, but Golden Unicorn is addicted to rust here. Folksinger is as mildewy a mess as ever was here. Prarie Harvest was a very clean, very satisfactory garden rose as was Serendipity.

April Moon and Prairie Harvest seemed to be what people here had confidence in.

Also be sure to look at the Easy Elegance series. It has some nice yellows. Kordes seems to be hitting the US market this year with Sunny Vigorosa. Cubana, a wichurana shrublet type, is bred from Singin in the Rain, lol. Apricot Vigorosa may be useful too. Unfortunately, many of these are likely triploid but I doubt it matters that much.

Personally, I like Prairie Sunrise but some say it mildews. Yellow Brick Road is probably my favorite of all of the above. I think there are a lot of options. One just has to dig deep for options and take a gambles on those options.

April Moon and Prairie Harvest seemed to be what people here had confidence in.

Also be sure to look at the Easy Elegance series. It has some nice yellows. Kordes seems to be hitting the US market this year with Sunny Vigorosa. Cubana, a wichurana shrublet type, is bred from Singin in the Rain, lol. Apricot Vigorosa may be useful too. Unfortunately, many of these are likely triploid but I doubt it matters that much.

Personally, I like Prairie Sunrise but some say it mildews. Yellow Brick Road is probably my favorite of all of the above. I think there are a lot of options. One just has to dig deep for options and take a gambles on those options.

Golden Unicorn is the only I have any experience with and it gets BS here in North Texas.

Prairie Harvest and Winter Sunset I BELIEVE are ones that I’ve heard is okay in this climate per se, keeping about 50 percent of the leaves as reported by Olga on Gardenweb. They might be the one’s I’d end up trying. Apricot Vigorosa is quite pretty!

I have grown Prairie Harvest AND Winter Sunset here in Richmond, VA and found them both to be quite healthy.The last few years they were no spray and had healthy leaves.

Had them together in pots in a plant ghetto and they looked lovely together. Was bad about watering and lost my Prairie Harvest (have since bought another one). They were growing near a tree and had some shade and the colors did not fade. My Winter Sunset is in NY now and doing well with fairly healthy leaves despite minimal care. Was surprised to see it faded a bit during the summer though it is now in full sun. Both have lovely form (HT). Rideau Rose Lad on Garden Web lives in Ontario Canada and grows Prairie Harvest and recommends it highly for health and hardiness.

My Prairie Sunrise did not seem to have much vigor and I lost it both times with two different plants though have to admit it has a beautiful bloom and is very fragrant.

Copied the quote below for you from an earlier post you made concerning apricot color. Larry responded that Winter Sunset made a lot of apricot seedlings, OP.

"Re: Establishing apricot coloring in a breeding program?

Tricky question. I had assumed that apricot is a blend of yellow and pink. Maybe it is. But I grew out some seeds of Winter sunset last year and was surprised at the uniform apricot color of the seedlings. I would have expected more segregation from selfing that combination, unless it is homozygous for both pink and yellow, but that’s not what I would assume from knowing it came out of Griffith Buck’s program. Doubloons gives interestingly colored seedlings, many of which are in the apricot range. I just got one really fine old-fashioned double from it in a cross with my Carefree Copper, a really bright apricot/orange. Doubloons seedlings are only occasionally repeat blooming except with very strong repeaters."

Winter sunset on our campus is doing well in a sunny airy place. the groundskeeper supervisor says they don’t spray but I see no disease. Ebb Tide, in another location under same supervision is a mess. W.S. has best flowers in spring and fall, slower in between. The last 2 seasons someone has been deadheading religiously so no more OP seeds to speak of. My OP seedlings do get BS in my plague patch. Most things do, but not the really good stuff.

Might have to invest in a Winter Harvest then.

Max, I have had all of them but Winter Sunset. Best of the bunch for me is P. Harvest and I use it as a seed parent. Folksinger is also a good seed parent, but mildew is an issue. P. Sunrise has amazing scent, was never a good seed parent for me, had huge black spot issues, but I did use it as a pollen parent and have a few seedlings kicking around. Golden Unicorn was the first to go, it did not set hips for me.

Thanks for the info on Earth Song. I have it as well as Carefree Sunshine. Will have to try the cross.

Agree with you it is a good healthy plant and has a nice high center bloom. I am not so crazy about its generic cerise pink color-SO GLAD it will produce nice yellows though.

Yes the only think about ‘Earth Song’ that has prevented me from pursuing it was that it is terribly pepto-bismal pink.

I love Prairie Harvest too for its relative health. Gentle Persuasion has been a very pretty warm colored Buck rose with minimal disease. I gave it to the neighbor years ago and should try to get pollen of it to use in crosses this year. I wonder Liz if perhaps you didn’t get the real ‘Golden Unicorn’ with your plant not setting hips. Kathy Zuzek in the early 1990’s worked with Ruby and Mary Buck to regather, identify, and disperse the Buck cultivars to nurseries to propagate. The ‘Golden Unicorn’ that she had and some of the nurseries are selling is compact and just gets terribly loaded with hips- so much so that rebloom is severely hindered. I remember years ago shopping at a local nursery that bought roses in from Hines and they were selling some of the Buck Roses. Most seemed labeled correctly, but what they had as ‘Golden Unicorn’ clearly was not the same rose as what Kathy and the Buck family identified and distributed as ‘Golden Unicorn’.

Here are two 2011 earth song x april moon seedlings which may have the color Max is looking for. 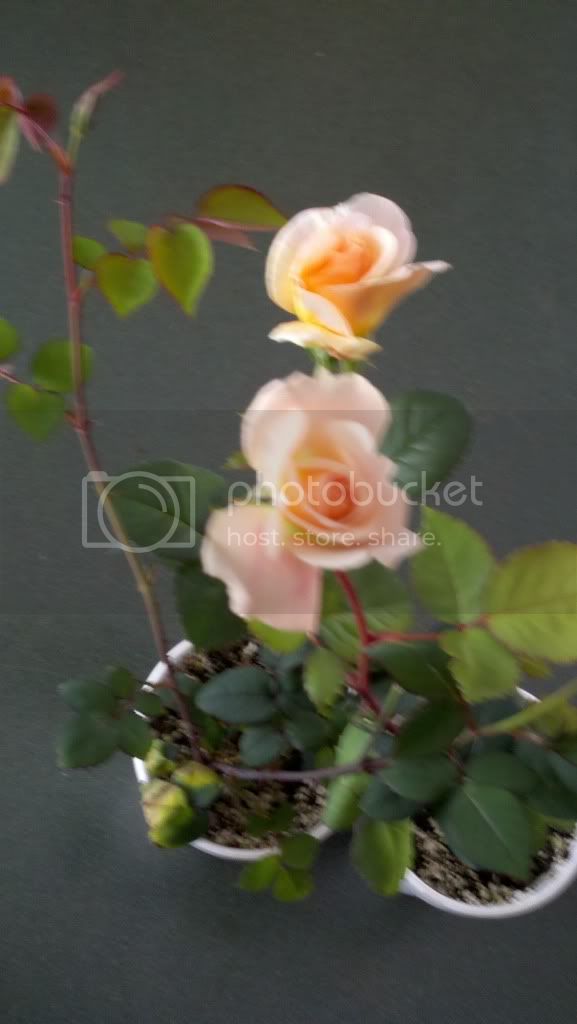 They are both very beautiful! Thank you for posting them.

I am looking forward to trying yellows on Earth Song in the future since it is a nice healthy plant and has good bloom form. Nice to know that with appropriate pollen it can produce yellows and apricots.

Yeah, they look cool. April Moon is one that I’d like to try despite not liking the color itself (fading primrose) because it seems to have a lot of potential. I hope it works out well for ya. Looks neat.

DAVE that color is exactly what I like. Slightly to the pink side of things, but anything in that peach-bronze-buff-melon family, is wonderful. My father and I have been shopping dahlias for our cut garden this year to sell to local florist, and we keep gravitating to all the apricot-golds.

I really enjoy Moore’s ‘Softee’ it’s the only mini I think I actually have and it’s not very mini and reasonably healthy…maybe two feet tall and the small flowers of apricot color/form is lovely, but it bleaches out quickly, which is rather boring.

There are others, too, that would meld well with the Buck mold. Lemon Flower Circus, for example, is from the Flower Carpet series, but its a butter gold floribunda. I have mentioned Yellow Brick Road, Aprikola, and Cubana, too.

Concerning Prairie Harvest as a parent, I’ve gotten very dark reds by applying pollen from a cultivar that was itself half Austin red. Of the three resulting vigorous seedlings, one was single, one was a glossy-leaved dark red and one was a very healthy rich magenta-red. This last keeps all its leaves throughout the season, and that’s in a region where blackspot spores swirl throughout the neighborhood always. Carefree Sunshine pollen, from a shrub down the block and around the corner, resulted in a slow growing, very double yellow seedling that also is free from blackspot here. This will be its third year, and it is about 24" tall. The yellow fades, so the center of the bloom can be dark yellow while the encircling outer petals have faded to white, and it’s actually a pretty effect. This plant seems to be always pushing out new buds. Pretty Lady pollen gave me a horse of a plant with simi-double pink blooms that are not much to look at, but the plant itself could probably survive on Zug Island. It is a vigorous but contained grower about four feet tall. Prairie Harvest cuttings can root in a glass of water, and I’ve found that its progeny will too. By the way, I never bother to emasculate Prairie Harvest, and still the resulting seedlings seem to reflect the chosen pollen parent.