Over the past year I bought in Teas to use intensively in my breeding cycle, one thing though, they developed a really bad mildew problem. If I had bred anything that mildewed that bad I would have thrown it in the bin, the worst are ( Marechal Niel and Baronne Henriette De Snoy). I am in the present mind not to use these, I thought Teas where pretty resistant to this sort of thing.

Any one out there had similar problems?

Warren, mildew on most Teas usually isn’t an issue here. It is on many things, but usually not the majority of Teas. When I worked at the beach, mildew was ever-present due to the cold, damp climate along the coast. The two which were the cleanest all the time there were William R. Smith and Souv. de Pierre Notting. Young plants of quite a few Teas would mildew but usually grew out of it. Almost all of them mildewed, as most roses, even enormous Banksieas, when sufficiently water stressed. Could your mildew have been water stress induced? Kim

Where I am Kim is about 3.5 hrs inland from the coast, mind you the humidity has been around 50% which is unusual for here, and lately we have had very heavy dew in the morning. These plants were bought in as 2yr old bare rooted stock. With the water stress I have heard it can create situations for PM to get a leg hold, I mulch heavily and water when soil moisture is in need, never let them dry out.

Kim did you get my email I sent you? about some Hulthemia Hybrid seeds.

Hi Warren, sounds like you have the water covered. There is a large double yellow Banksiea out front topping a large stand of golden bamboo. It flowers much of the summer and mildews all the time. I believe it’s a combination of the enormous transpiration of water from the bamboo and the water stress the rose experiences also from the bamboo.

No, sir, I didn’t receive your email, or any other about Hulthemia seed. Only Euphrates has flowered here so far, and it never sets anything but mildew. Persian Sunset, I think it is, is in bud right now. None of the others has set buds yet. Kim

Howdy Kim, This year was the first time I have seen R. laevigata with PM , could nt believe it. That is one rose which I have tried and tried to get hips set, thought I had it beat this year when I put it on Safrano, they developed well with a good size and then went yellow on me, could have spat chips LOL.

The reason I asked you about the Hulthemia Hybris seed, on HMF I saw a pic of your hand on a hybrid flower. I think crossing Hulthemia’s you would’nt want to get to complicated, keep it at single or semi double so as to enjoy the blotch.

Just watching our news on TV looks like their going through hell in Tornado alley, thank god we dont get them here.

“keep it at single or semi double so as to enjoy the blotch.”

Hmm, one I made just recently is Betty Boop x 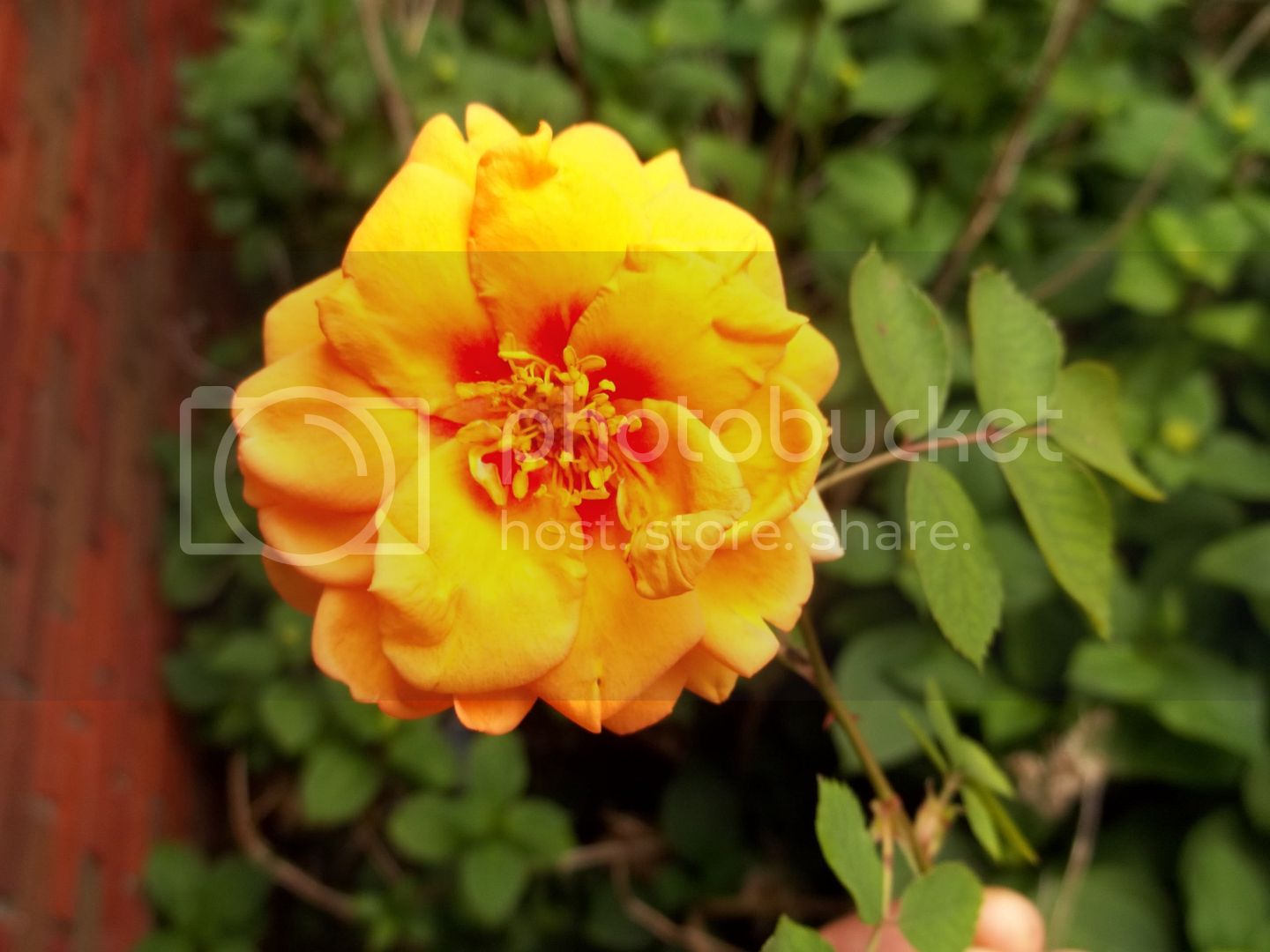 -you know how these things go though.

You know I would never had thought of using Betty Boop in a cross like this. Probably should have said , not a big full double, your blotching is quite good, well done.

For me, Teas = Mildew. One of the only Teas I grew/grow that was reasonably clean is ‘Mons Tiller’. All of the others are now long gone. I have used ‘Mons Tillier’ with some success in breeding, but would hesitate to do so nowadays, as much because of (lack of) freeze tolerance as much as proneness to Mildew. I will no longer use any other Teas in breeding because the offspring have, in my experience, universally been tragically Mildew prone. My last attempt was in 2008, with ‘Reve d’Or’. I discarded every single seedling, and there were hundreds.

I’m not saying that Teas might not be useful breeders in certain climates, but they were a poor choice in my circumstances.

I’ve had severe mildew in Tea seedlings too. I usually cross Teas with roses that have good mildew resistance, but even those crosses produce a lot of mildew-prone seedlings.

Hmmmm, This is something I will have to think about, didnt realize they were so prone to this, but as Kim said it may be climate they are grown in. Oz like the US. has varied climatical regions from tropical, Desert to cool damp, Not like you fellows over there with -20 + .

As I said in an other thread Chinese Species Roses, I am going to use

With some R.bracteata and R Gigantea thrown in along the way, to combat this problem of BS and PM. I have stuck to my guns with this region in china because I feel it has a lot to offer in hyrids and hopefully a solve a lot of headaches.

Warren, I’ve only pollinated a couple of Hulthemia blossoms. I am fascinated by them, but they’re far from my main focus. I’m obsessing over kicking the blamed black spot out of my seedlings, along with the prickles. Once I get some of THOSE, I am ready to narrow the whole thing down to those and hold the line.

I have to brag on a few roses I’ve recently added to my “stable”. These are so rudely healthy here, I study them looking for some sort of spots, but have found none.

Also as a side note PM is also increase when you have bad air circulation. As far as teas and their likes and dislikes I can not add to the conversation as my climate gets to cold.

These teas are stuck in between a lot of others, might need to mover them in winter.

Kim talking about losing the prickles, this is one I bred Charles Austin X Vanilla. I used Charles Austin to get the petal count and Vanilla to thicken the petals, tighten and pull the bloom upwards. The bloom is around 5" and has moderate scent. Did a similar cross using Charles Austin X Smooth Buttercup, the results were thornless with bright lemon yellow bloom. In both these crosses the colour does not fade that much which is a big bonus. Foliage is really clean as well. Any way see what you think of the top one.