Tell me, please, my cross with the participation of the spinosissima hybrid was divided into strongly prickly seedlings and non-prickly ones. Is it worth thinking that those that are not abundantly covered with thorns will not inherit frost resistance?
Thanks a lot in advance!

No imo, based on Red Dawn x Suzanne experience in my zone 4A CDN garden. Red Dawn very tender and doesn’t survive in my climate, but cross with spino does.

… both roses do not have spino “porcupine” bristle density and form. More like common low sensity “thorns”.

Depending on how old the seedlings are, the thorns may change. I have some seedlings with spinosissima as the seed parent. Most of the seedlings just looked selfs until they got a bit older. Same plant, base vs upper 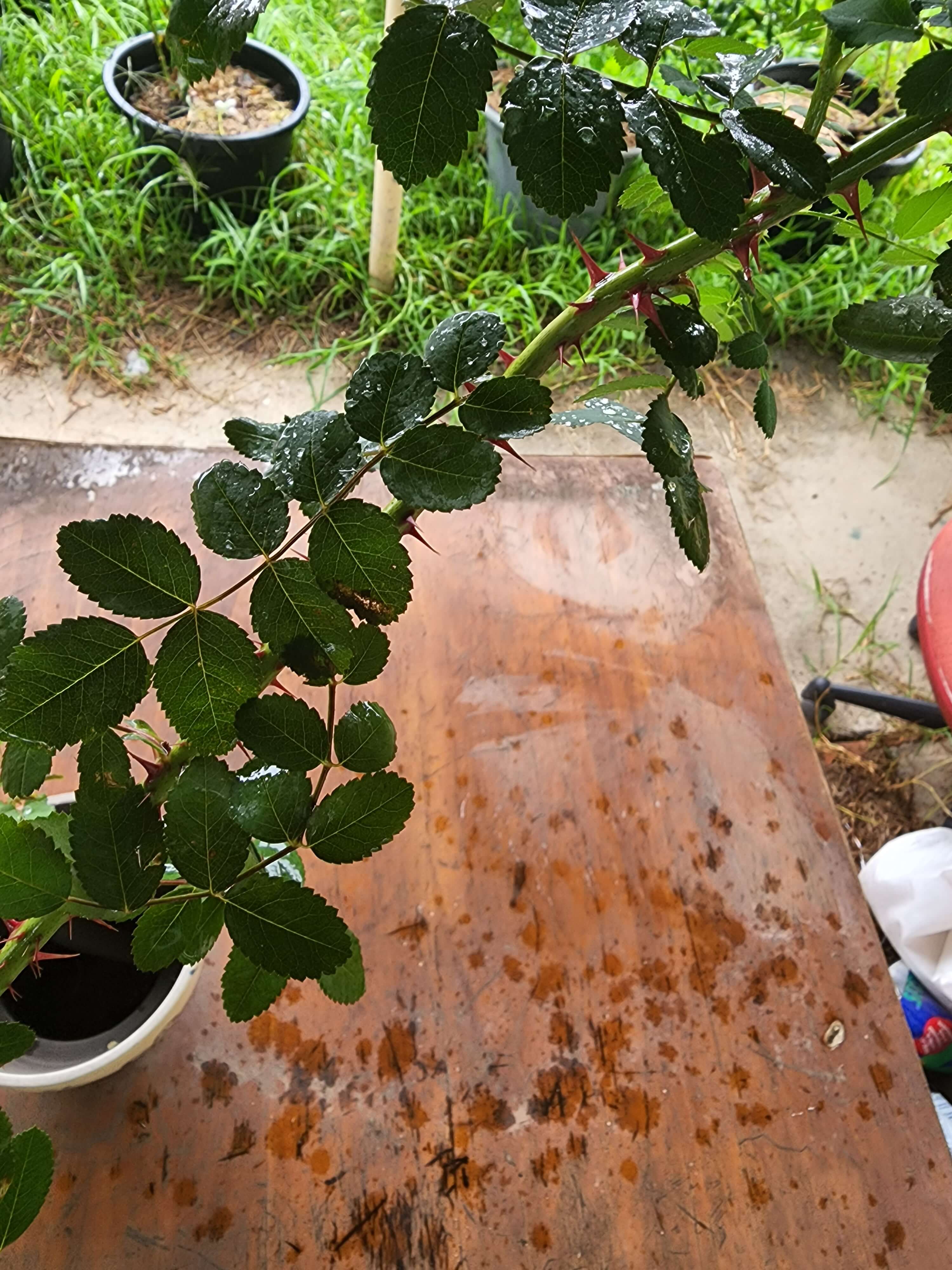 Tell me, please, my cross with the participation of the spinosissima hybrid was divided into strongly prickly seedlings and non-prickly ones. Is it worth thinking that those that are not abundantly covered with thorns will not inherit frost resistance?
Thanks a lot in advance!

There is no evidence for this. There is some evidence against this idea, since “hardiness” is polygenic. 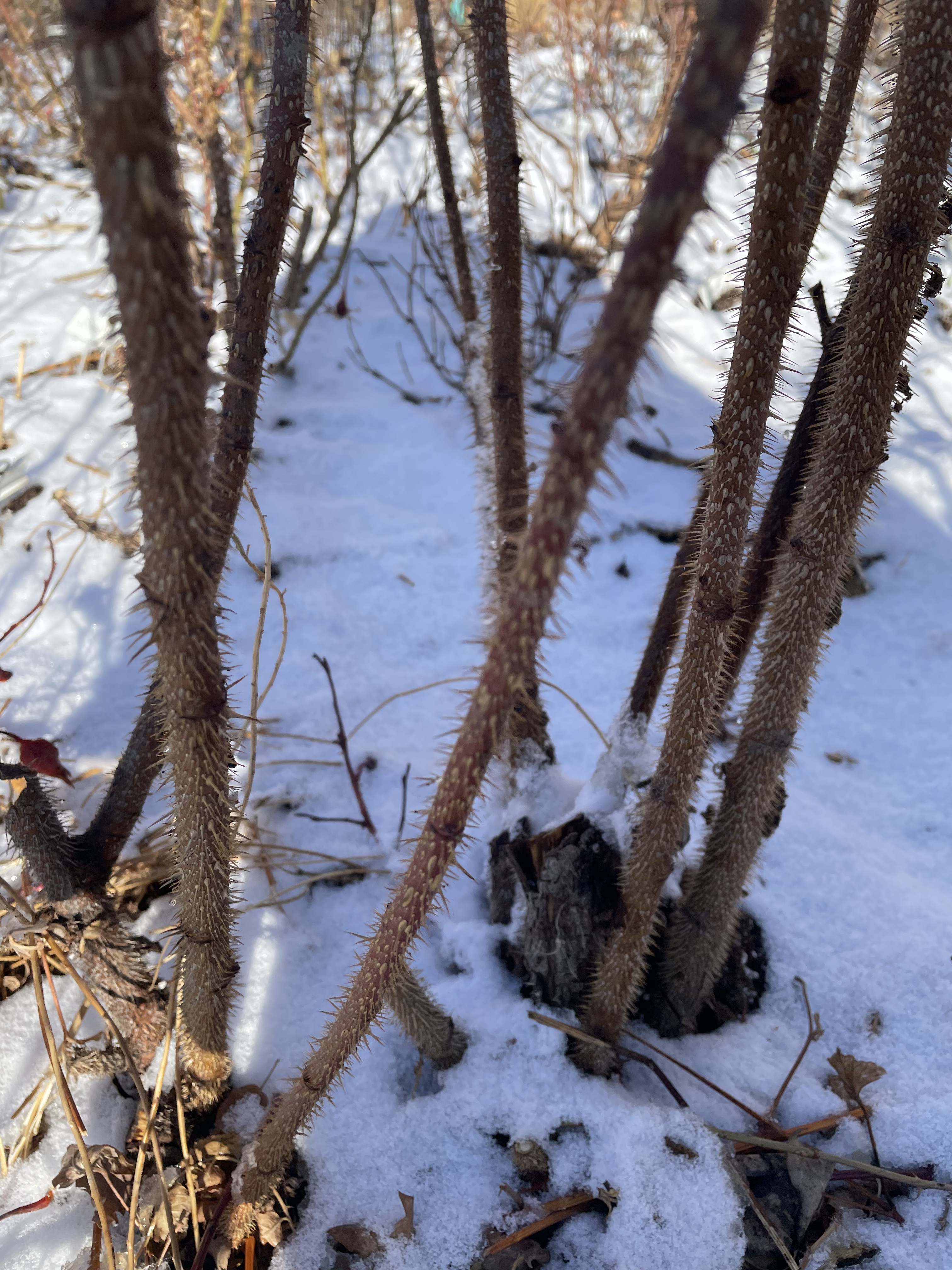 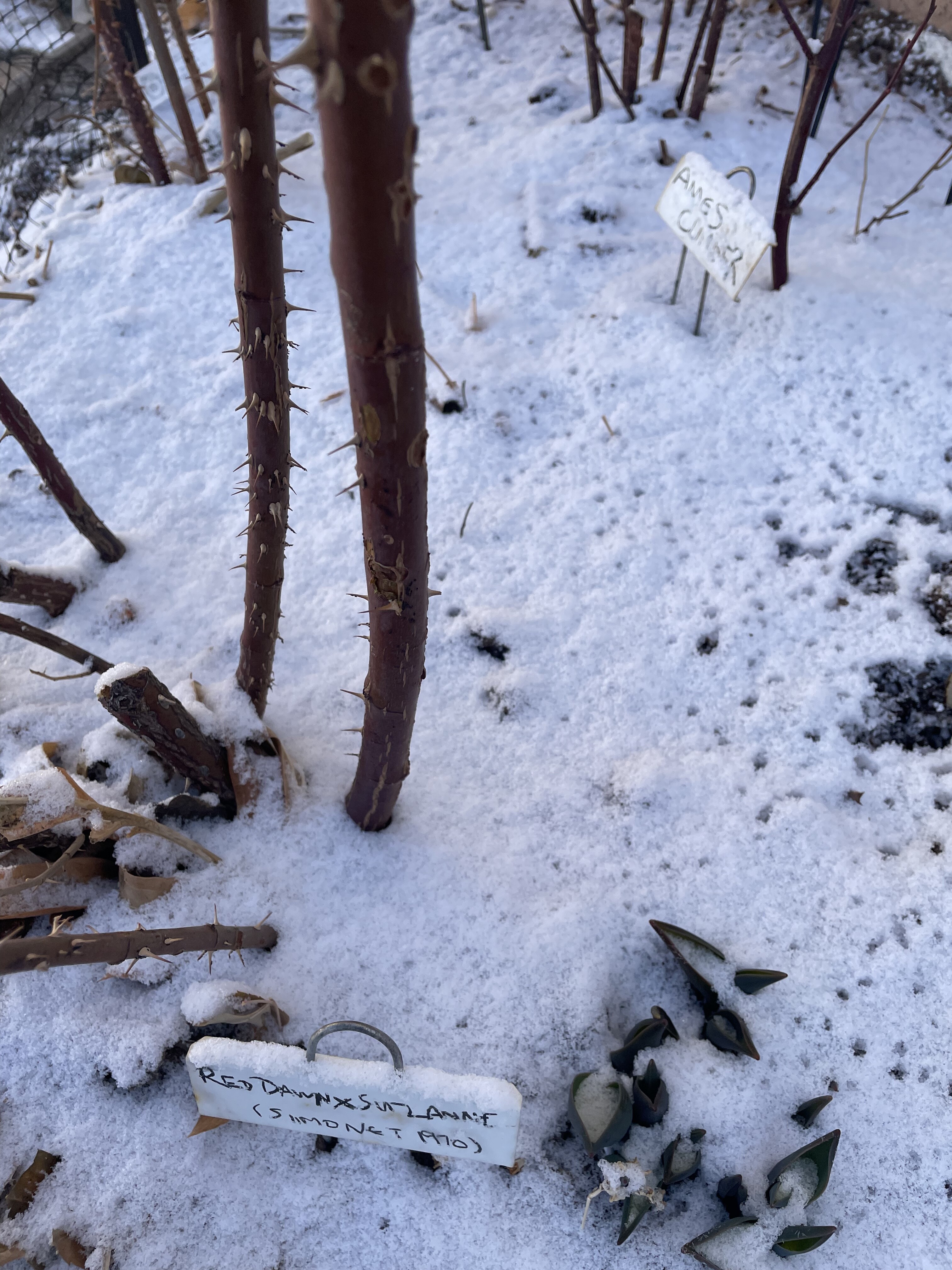 Any more experience with these crosses?
I was able to use Red Dawn x Suzanne pollen some this year
(it set no hips from the pollen I placed on it).
I have Suzanne but I am still waiting on blooms to collect pollen.
I have a few seedlings being tested Aloha Hawaii x Williams Double Yellow, but no
blooms yet.

Used RDxS as seed and pollen parent this summer. Hips and seed obtain for both types and some fails. Waiting to c if germinate so awhile yet to go.

glad to hear you were able to use it both ways. I had no hips set on it. Perhaps it needs to get established more. Good to know, so I’ll retest it later, and perhaps try diversity of pollens to see what it takes.
Duane

Mine never been prodigious hip setters for me … young ones 3 to 5 years old maybe a half to a dozen at most for a good bloomer. Older 5-8 years old bush can get more than a dozen or so. Definitely better than Lillian Gibson. Though my LG did germinate an OP seedling last April (outside winter test plot seed burial). Looks like LG in habit and leaf form. Lifted and brought in last month and under lights.

Duane, did you obtain your RDxS commercially, by any chance? I’ve looked for this one for a long time, but to no avail. I have no idea if it would survive well in my climate (Suzanne is allergic to the conditions, although some of its descendants fare quite well), so I’d really prefer to pay some vendor good money to avoid any guilt issues!

I sourced a European version last year from RosenPosten Denmark. Don’t know if US allows import.

US always reads as an insurmountable bureaucratic hassle on rose lust websites - something about having to have imports in quarantine plots for a long time.

Here need CFIA license about ~ $100 and for specific approved foreign nurseries, professional phytosanitary inspection and cert at source req’d and accompanying roses for border security inspection. Really surprised Cornhill who use do US export doesn’t appear to carry it.

A prize Alberta rose for me hybridized by Edmonton’s Simonet. Prize because totally hardy for me, good to acceptable bloom strength, but not a stunner, puts a bloom or two until freeze up with a pause after spring first flush. Used in Explorer series, Dr Zelesky id as triploid l believe - see his HMF photo note.

Got a half dozen examples as l can rely on it for a good show.

… forgot did try Red Dawn (3) from Pickering, bud wood donated to them sourced from P. Oulsen. Protected but to no avail - all gone in 3 seasons. Another Simonet hybridization.

Point is, tender x rock hardy = hardy … sometimes … RDxS is a brilliant goal example of it canbe done (without dominate rugosa genes) in my books to achieve an acceptable hardy shrub rose ( done by a double geranium guru breeder).

Yep, importing roses from most foreign countries directly into the U.S. requires quarantine measures that would put off all but the most determined folks with the means to go through with it. Canada is a rare exception, as there is an agreement between the two countries makes it relatively easy to import roses. Ordering from Cornhill and Palatine is quite simple and relatively inexpensive (a bargain, really); I used to order from Pickering all of the time, and Hortico on occasion. However, I’m not aware of any U.S. or exporting Canadian nurseries that carry RDxS, nor have I seen it for sale over the many years that I’ve been watching for it!

I agree that the model of tender x rock hardy is one to emulate for other potential successes (or at least stepping stones to potential successes), although the pool of rock hardy parents that have a known history of producing hardy winners is a very small one. If Suzanne would only be content to just limp along and bloom a little here, I’d take its pollen for a spin myself. Maybe I need to try babying it under lights in air conditioning over the summer like I’ve done before with Soleil d’Or and some other outdoor lost causes…

Here is a couple of clips out of my 2022 hybridization crosses Excel log (partial) for this summer past involving RDxS as both seed and pollen parent.

Note “1 to 3” seed cases as seed parent. For these I attach a low probability of germination. Skeptical of pollen cases high seed counts with Hunter and R. Carolina … for R. helenae hybrida and Lykkefund (thornless MF) high seed counts I have all fingers, toes and legs crossed and sitting on wooden floor in hope.

The seeds are still in life below 0C rest since Oct 5.