I have over a dozen second generation OP seedlings from a chromosome doubled R.rugosa. I measured the pollen grains on half of them and they mostly have tetraploid sized grains but some have diploid sized grains mixed in as well. They are a typical rugosa with single magenta colored flowers. They all have very good disease resistance and hardiness except for a couple have some minor late season powdery mildew. I’ll probably keep one or two but I’m going to cull the rest. So if anyone wants one let me know, I won’t cull them until late October or early November.

I meant to include a few pictures. 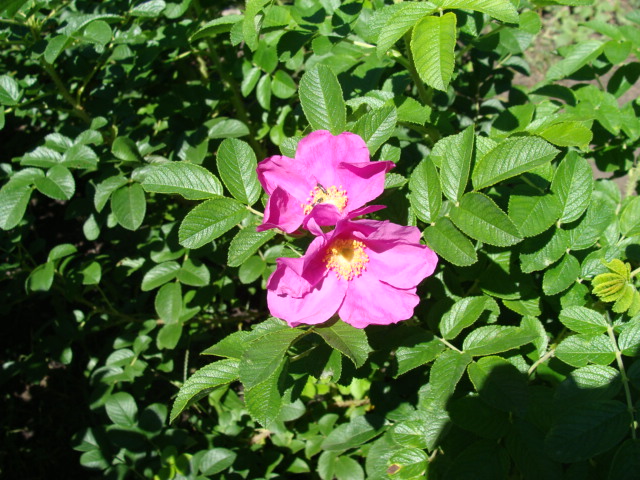 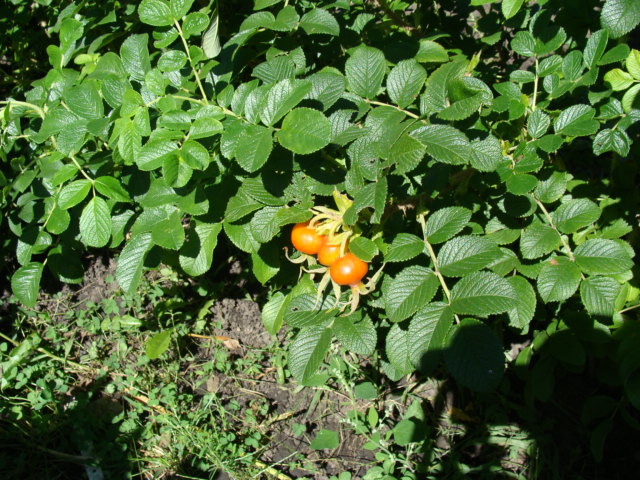 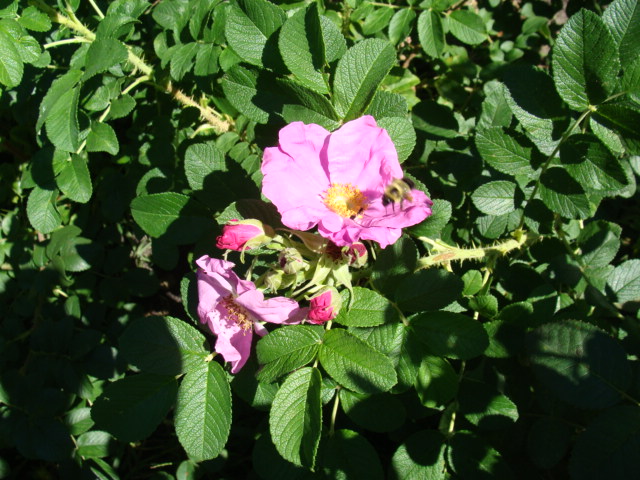 Ill like one, or you could send some hips.

I’ll take whatever you can send me. I’ll find a place to plant them in Baudette, which is just across Rainy River (where I live) on the Minnesota/Ontario border. Then I’ll have easy access to them. I’ll send you a mailing address later.

Enrique
No these are derived from a rose David Zlezak doubled a number of years ago. That rose wasn’t very vigorous but I was able to raise a small number of seedlings. Some of those seedlings weren’t female fertile and didn’t produce hips, but two did produce hips and I kept those. I used the first one in a number crosses but I soon realized it had reverted back to a diploid. The second one (the mother of these seedlings) isn’t as vigorous nor produces as many flowers as the first one but it hasn’t reverted back to diploid. So I’m pretty sure these seedlings will be stable.

Salix just send me your address also, I can do either or both. 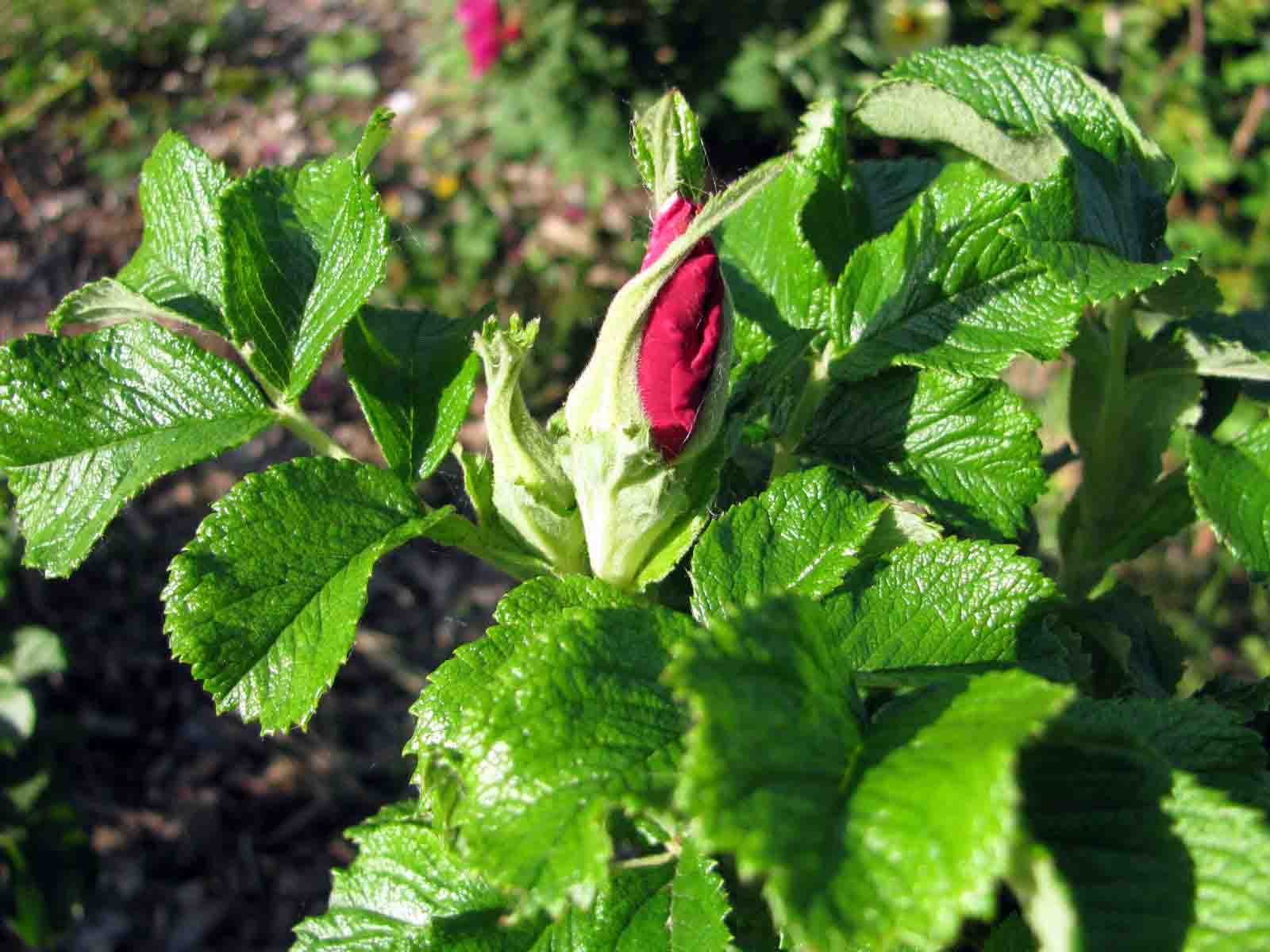 That is great you’re making progress with that line Paul!! I haven’t moved that line forward yet. I had a tree cut down near the original 4x plant and it is growing better this year again. Here are some pictures of it. It was started as an open pollinated seedling of Rosa rugosa rubra and treated with trifluralin. 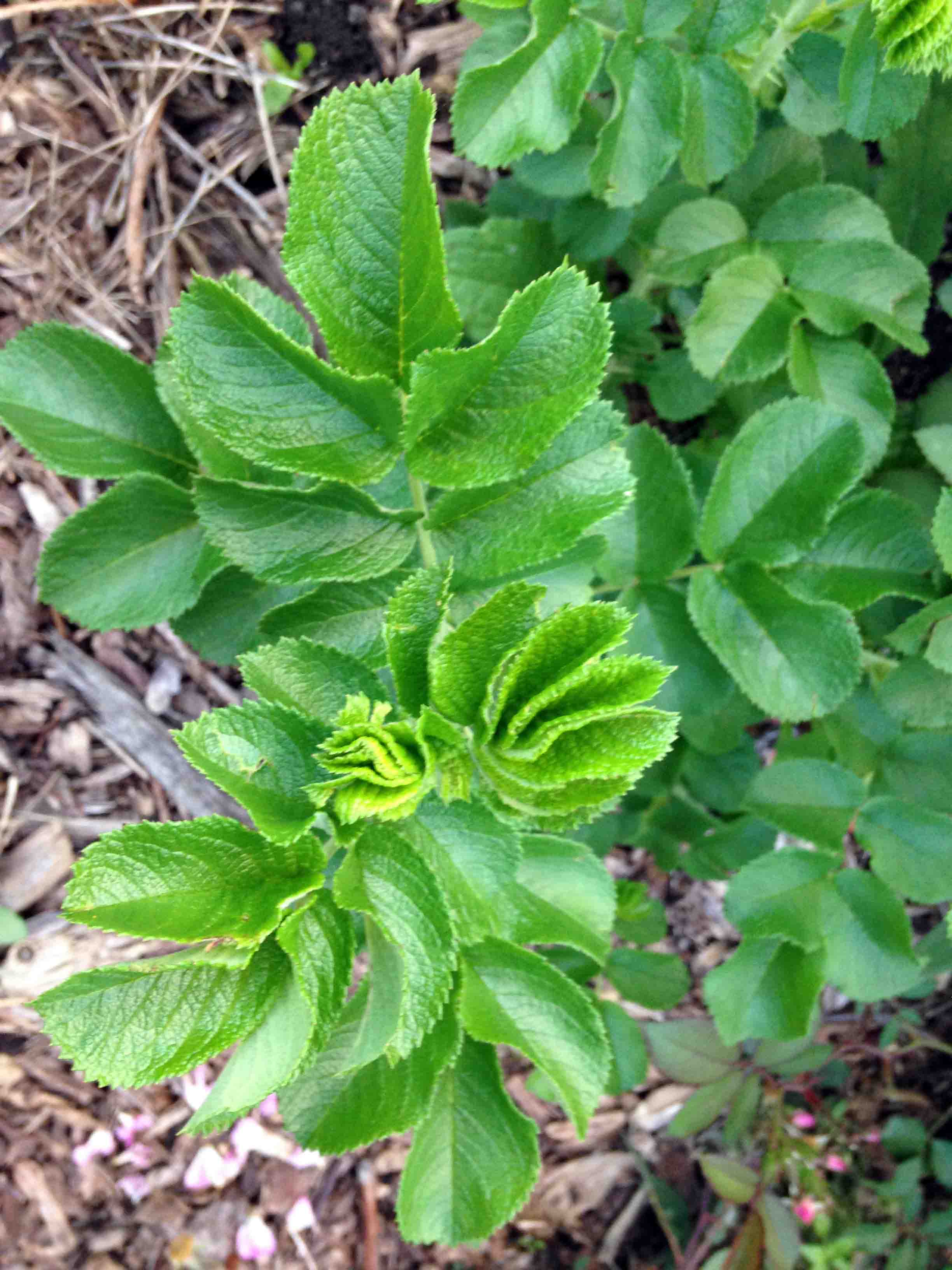 Good looking foliage David Z, does it stay as fresh as that year round ?

David, I also have a plant of the 4x Rugosa you gave me. I raised dozens of OP seedlings from it this past spring and they show a lot of variation. Some have small leaves and thin stems like young diploid rugosa seedlings, and then there is one monster, tall and hefty in all its parts, that I keep having to repot because it keeps on growing! It will be interesting to see what the blooms on these seedlings look like in due course. It was planted in a bed with assorted tetraploids and some diploids of various kinds.

Can you explain how you do that ?

Andre,
4 years ago I received a microscope from Henry Kuska that he had set up for this. Included with the scope was a web cam that he modified to fit into the eye piece along with some software to capture the image and to measure the grains. I have used this quite a bit to determine the pollen grain sizes of many roses. A number of years ago, David Zlezak published a paper where he measured pollen grain sizes and did root tip squashes on many roses to determine their ploidy and to see if there was a correlation between the two. In the paper he used different size ranges for diploid, tetraploid, hexaploid and octoploid roses. I use those same size ranges to determine the likely ploidy of the roses that I measure.

I tried measuring stoma size instead of pollen so that it is available for more time and with seedlings. I tried to use the nail polish method but could not find them. I think that I lacked suficiant contrast. Any ideas?
Johannes

I plan on shipping the plants in the next couple of days. Paul Olsen I need an address to ship them to.

I sent a PM, if there are any still available. Thanks.