Henry sent me budwood for this one last Fall. I’m really happy it will flower in my climate.

I think the color is quite nice and I love the stamens.

Fragrance is light but definite. Henry this one has been fertile for pollen? 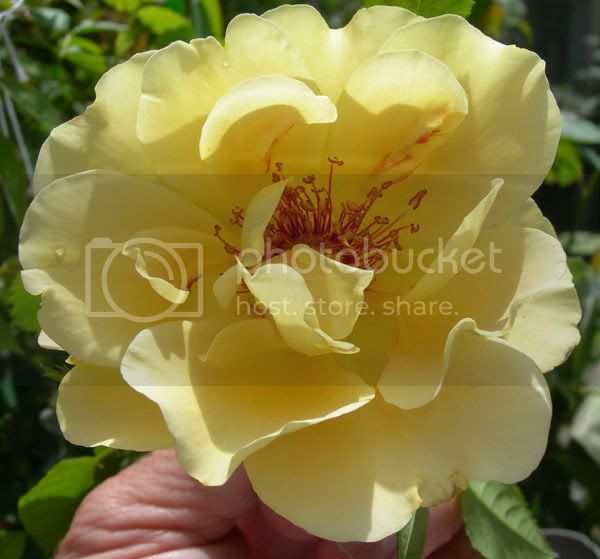 I think this rose is very beautiful. Have you thought about introducing it?

Bob, good to hear that your plant has flowered. Next, we have to find out whether in a warm climate and as a grafted plant it reaches the tops of your giant redwoods. Also, what its period of bloom is. It only sets a few random self pollinated hips here in Ohio (we normally have cool, wet springs). The link below will give an idea of what its pollen have worked on. When used as the father, it appears that the seeds germinate readily.

Sure would be nice to get some reports from northern Michigan, Wisconsin, and/or Minnesota.

Enrique, the present plans are just to distribute it for use as a parent as it is vigorous, winter hardy, and disease free in my northern Ohio garden. I have considered giving it a name such as “Kuska’s Yellow”; but have resisted so far as for breeding purposes “Rugelda X R-15” appears more meaningful.

As I’ll probably have only half a dozen blossoms to play with this year I will concentrate on using it as pollen parent.

I can tell you it did not go deciduous here. It wants to grow straight up. The only reason I have as many blossoms as I do is that I bent the cane over and forced it to break along the length of the stem.

It is very vigorous and very prickly. I suspect it is going to get very large. It seems I shouldn’t wait to breed it to a mini.

This is a once bloomer for you, correct?

Yes, it is a once bloomer, but the period of bloom is several (maybe even 3) weeks.