To me the blossom resembles R. banksiae banksiae. So far this seedling is only of moderate vigor.

Ever tried The Pearl’s pollen?

I’ve grown it for years, and I have never pollineted its pollen on diploid roses before. Usually because the weather doesn’t permit me a window of opportunity.

Like now. It’s so heavy with flowers, and the recent cold rain is hindering all my crosses. I got a single OP hip on it last october. It’s hasn’t germinated.

I’ve never tried ‘The Pearl’. I know too many good hybridizers that have failed trying to use it. That’s why I went for ‘Letizia Bianca’.

I was fortunate to get a specimen. It hasn’t been in the U.S. all that long. Letizia Bianca requires some coddling.

Fertility isn’t the best. This is the only seedling I have to show from last season and several successful pollinations.

Most of the seed didn’t germinate.

I love The Pearl. It’s not so much of a climber but a very VERY bush shrub. It reminds me of a cloud.

I remember that I was about to get Letizia years ago, but I don’t think it was ready by then. So I bought The Pearl instead.

I remember T&M University sent me Dr. Basye’s banksia amphidiploid. I gave the cuttings to Jim to propogate. That was years ago, and I didn’t remember until now. Wow, I didn’t think it was years ago until I really though hard about it. I was working in the bank at that time. Maybe in 2004.

I bet you could do wonders with Basye’s basye’s banksia/lavegata amphidiploid. Email Jim (not Sproul, mind you) and see what’s up. He rooted two plants if I remembered right. Maybe he pass on the favor to you.

I don’t know if I have the room or the energy to take on another big species hybrid right now. I think I have a source for Basye’s gigantea laevigata when and if I can take it on.

Getting access to the pollen would be much easier but from what I hear it hasn’t produced any offspring so far.

Creating something that has a chance for repeat would be much preferred.

There are hips forming using laevigata and Anemone pollen placed earlier in the season. Germination is another matter.

Laevigata will enter the mix eventually. It’s very easy to get distracted and get too many projects going at once.

Laevigata is a tough nut to crack but so was banksia.

If hybrids have been created in the past they can be again.

It will come with time.

I remember Millie Burrel, who worked under Dr. Byrne, mentioning me that it did produce seedlings. Other from that, I didn’t ask what were the specific crosses and other stuff from that.

My Rosa banksia lutescens is about to bloom finally (in full force, no freeze damage this year, woot!!!). But all I have that is repeat blooming to use is Hot Cocoa and Bengal Crimson

Well, I guess I will find out how sterile it is here

I was tempted to try Rosa rox. normalis on it since it is about to bloom too, but what would the point of that be?

Jadae, I tried using banksia lutescens a bit last season for pollen and got nothing.

If you’re interested I can send you some of this one. It gets a bit of mildew but it’s vigorous and descends from ‘New Dawn’, ‘Silver Jubilee’ besides californica and R. banksiae banksiae. It will probably be hardy for you there,

It’s the most vigorous seedling of this cross. I suspect it’s tetraploid. It should be fertile.

Very nice Robert - this species work is not easy! You are breaking some new ground!

No, species work isn’t easy but I do find it the most rewarding.

I’m cutting back on the number of species I’ve acquired now since I can’t hope to utilize them all.

I’ll work on perfecting what I’ve got going before I take on anything else.

These should last me nearly a lifetime as is. YEAH!! 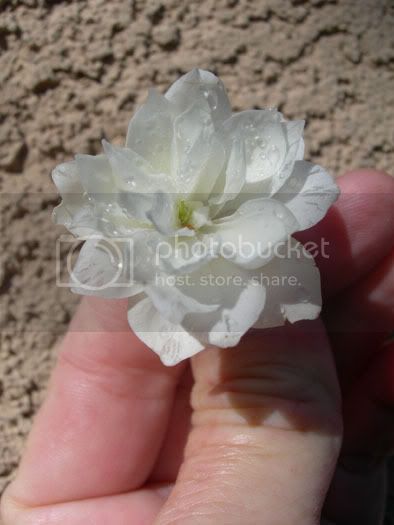 Sure Robert! Although I plan to use Rosa banksia lutescens as a seed parent with tetraploid pollen. Im just gonna take a brush, dab a dot on every bloom, and hope one takes. If not, oh well

I still need to send you some cuttings when the roses harden off late May/early June. I hope it is not too hot for you then?

I can try budding anytime though now is good for me. Let me know when is best and we’ll do it. Thanks, Robert