Rebloom and the history of the rose

I have been wondering the last couple of days…
From Fougere-Danezan et al. (2015) as well as Vozárova et. al. (2021) we can conclude that there are 2 rose clades that parted at some point in the evolution of the rose.
I do wonder if the reblooming genes like RoKSN_wild, RoKSN_copia, RoKSN_A181 (did I forget some?) can learn us something about the history of the rose as well… R. moschata as wel as R. rugosa and R. fedtschenkoana are said to have RoKSN_A181… So, could it be that they inherited this gene from a common ancestor? I also wonder about R. spinosissima. It is reflowering here in autumn as well, so would this rose also contain RoKSN_A181?
It would be really interesting to ‘scan’ all the known rose species on the RoKSN gene and their different alelles and see how this fits with our know “history of the rose”

Or do you rather think that these different types of rebloom, these mutation in in the RoKSN gene have occurred in different species? Then still, I wonder, how does it come that the same mutation occurs in different species? And would it be logic to assume that there must be within the variety of species, e.g. within rugosa, that you might find some that do have the A181 mutation and some that do not have the A181 mutation?

It also strikes me that a simular kind of mutation has occurred in strawberry. And I am guessing as well in rubus? And maybe in some other Rosaceae?

No gene history knowledge to contribute, but if has repeat potential thats a great synergy benefit for my efforts, because it shows extreme hardiness in my garden.

Feels like another XYZ stan rose that meets my winter needs … but with repeat potential … glad l read this thread - now a target to cross.

Just hope its offsprings germinate as rampantly as it apparently grows.

Fedtschenkoana’s pollen worked MUCH more easily than using it for seed in my experience, for what it’s worth.

Txs Kim for the experienced based info on an approach (m). I noticed you done a lot of work with this species, good to know (an incentive), someone has been successful with this hardy species.

I will consider it a success to just get a cross to occur and tune in later seasons for other attributes, but a potential hardy cross and potential for repeat, would be milestones for now even if it turns into a long term “ so what?” … stepping stone?

You’re welcome,Riku. I did accomplish Pepper Fed, R. Arkansana “Peppermint” X Fedtschenkoana. I hope someone, some day can achieve something with it. And, there is Puzzlement, which seems to be Stellata mirifica X Fedtschenkoana and its further hybrids.

I also did some trials with Fedtschenkoana and like Kim I had better results with pollen. Using its pollen on Applejack, I got 2 germinations: both plants with grayish foliage, one with a small single white flower very similar to Fedtschenkoana and the other with a semi-double flower. The 2 plants are slightly remontant. Last summer I made, using with the semi-double flowering plant, the cross ((Applejack x R. fedtschenkoana) x (G49 x Applejack)) from which I obtained 3 fruits containing 12 seeds in total, and resulting in germination. The plant is already showing some greyish foliage, I hope to see if there will be any flowering this summer?! I also have another cross made with Fedtschenkoana pollen: (Thérèse Bugnet x R. fedtschenkoana), which gave a similar result to the one made with Applejack, small single flower and greyish foliage, but embellished with red petioles. I will definitely make other crosses from these results, to be continued! 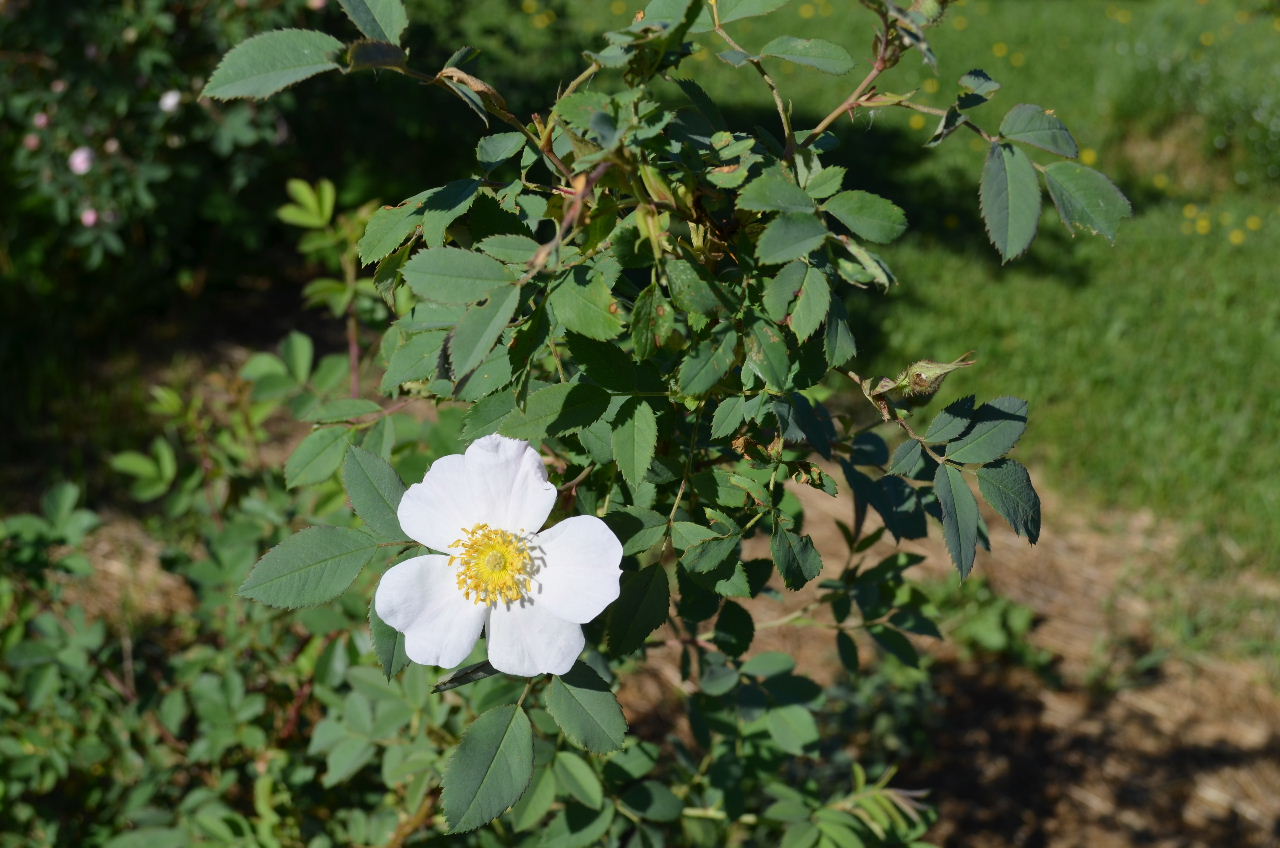 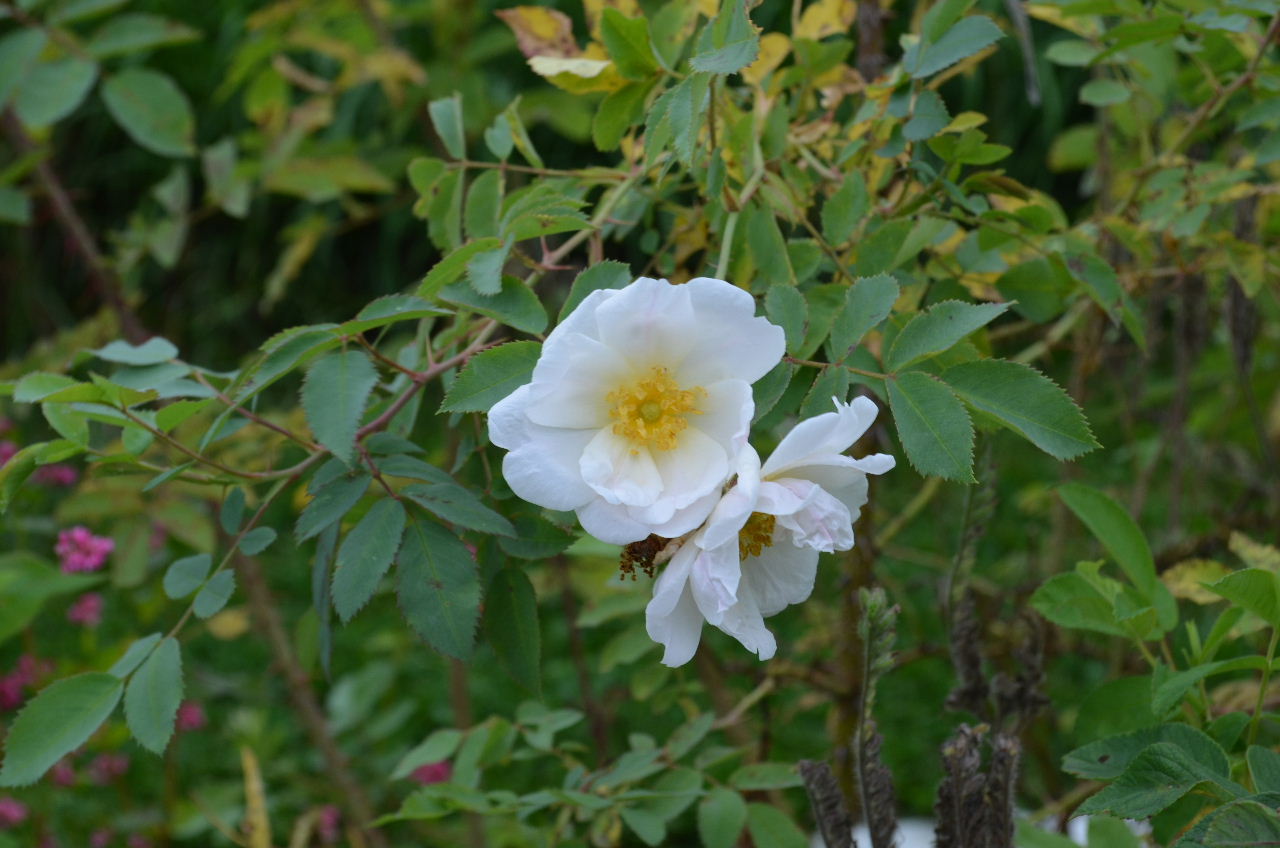 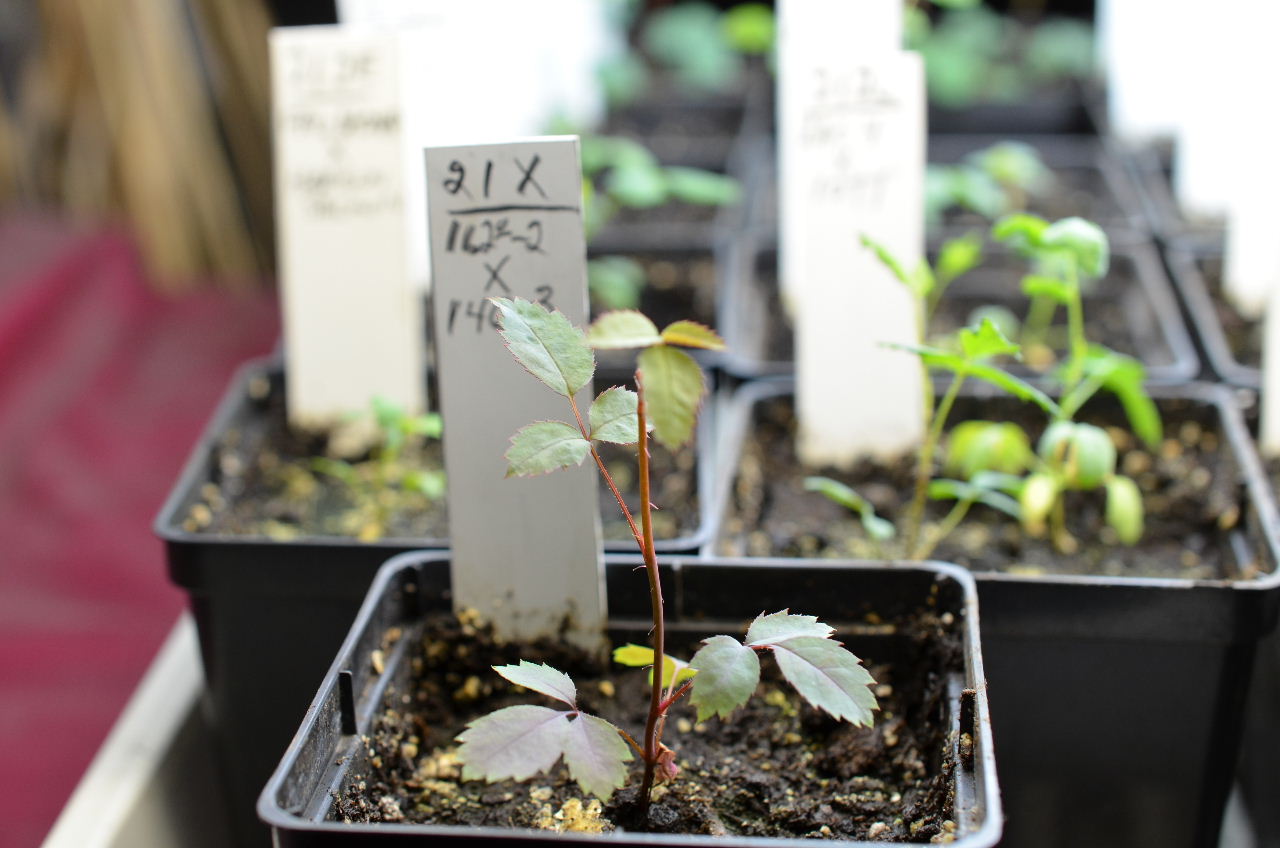 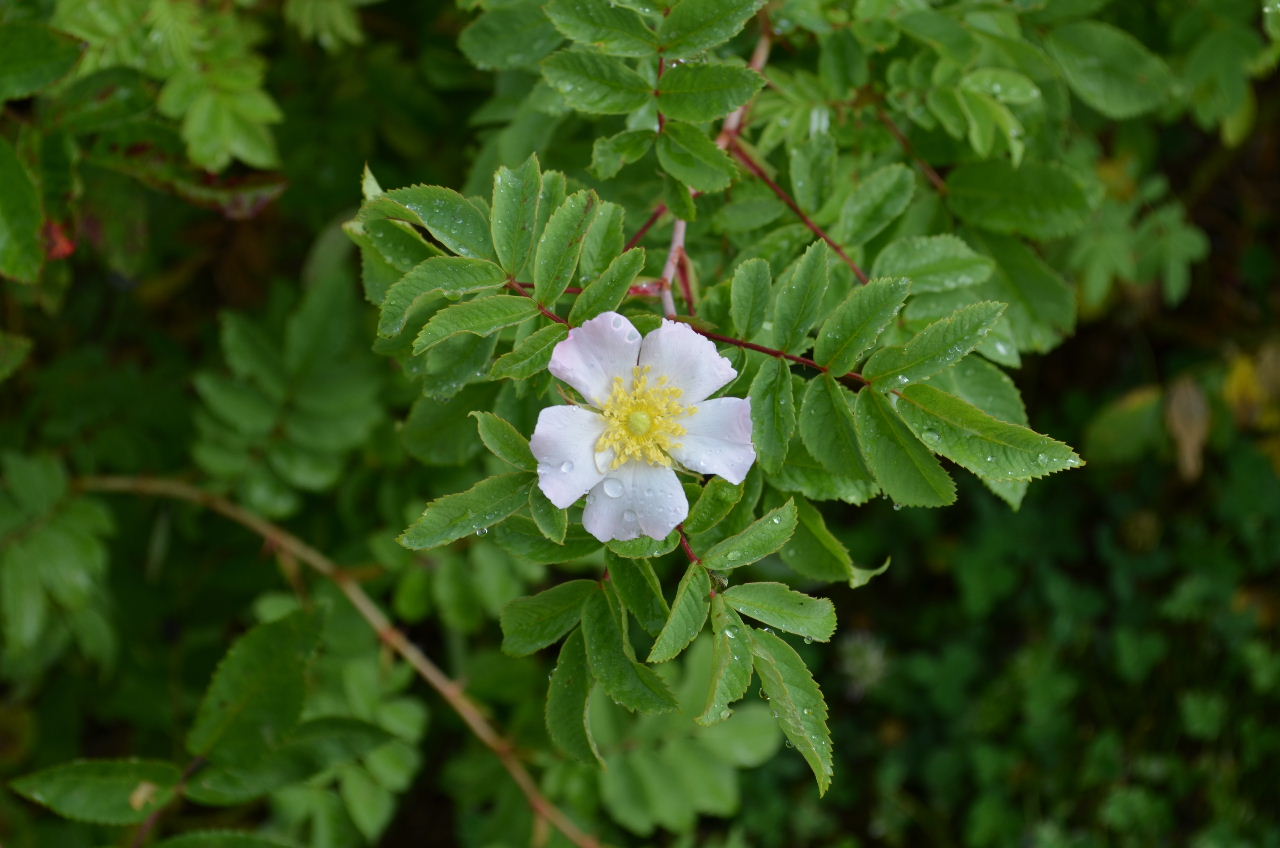 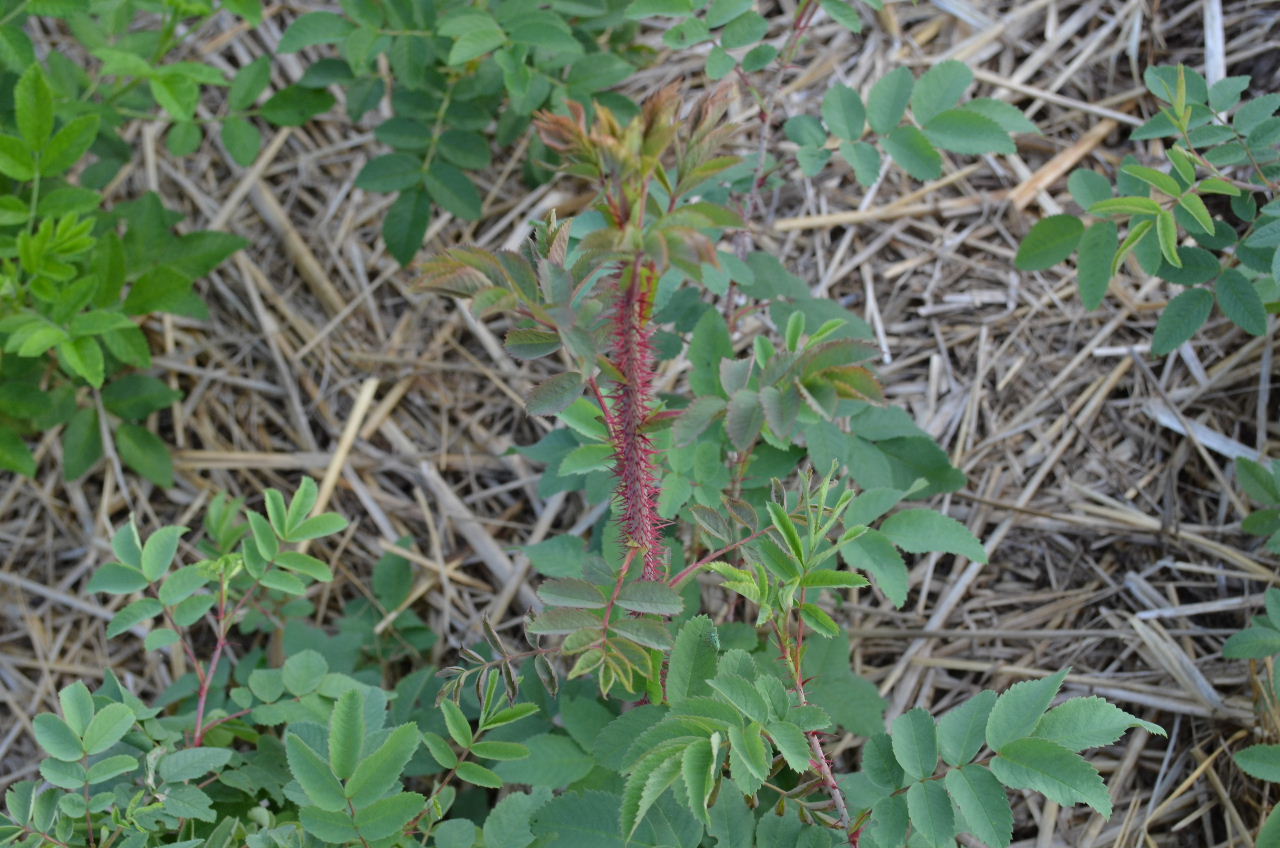 Txs Andre for info… it provides excellent experience info and encourages me to definitely pursue using the species.

l had composed an interesting reply tome, but lately the board seems to set a time limit and l lose it when hit preview (asks to resign in).

Thinks its because l changed to using a VPN.

I love the approach you are describing Dane to better understand interrelationships between/among rose species. There are some other genes people are trying to follow too in order to do this. I am very interested if R. arkansana (an American species) with its rebloom that seems similar to the style of R. fed. and others with the A181 allele actually have A181. The idea that maybe the same variation/sequence change in KSN emerged independently is an interesting thought too and would be hard to totally rule out.

Would you be interested in some of the Pepper Fed, David? 'Pepperfed' Rose It’s trapped in a five gallon can and will likely not flower here this year.

I also did some trials with Fedtschenkoana and like Kim I had better results with pollen. Using its pollen on Applejack, I got 2 germinations:

Waauw Andre, it even surprises me that Applejack did take it’s pollen. Two years ago I tried several crosses with Applejack as a seed parents but she didn’t want to set hips… so it’s even more amazing that she did accept the pollen of rosa fedschenkoana.

I myself was extremely surprised by this result. In 2016, I harvested 5 orange fruits after pollinating 5 flowers which contained 57 seeds in total. Of this number, I obtained 2 germinations in 2017, a real chance! In 2018 and 2019 other tests but negative.

But in addition to the result of the cross with semi-double flowers, made last year as mentioned above ((Applejack x R. fedtschenkoana)#2 x (G49 x Applejack)), I obtained, in 2020, two plants using the pollen from the single-flowered plant, on 4 Applejack flowers which gave 4 orange fruits containing 59 seeds (Applejack x (Applejack x R. fedtschenkoana)#1)… double chance! I would like a first flower this summer for… a third chance??? I wish you at least a first chance in your next trials, Dane!
Sincerely, André