Pruning Kakawa to give more sun to an original R. virginiana (10yrs old) that was buried by it. Pleasantly surprised to find an old, but very semi-double bloom, versus normal over the years … superior looking rose, using some imagine, if l had seen bloom earlier. Bloom same width of 2.5 inches as l find on the larger Carolina single blooms.

Got to love instability when it cuts the right way. This rose started over at spring so it might of decided to go showy for bees (layman’s theory). Do not cross with two roses due to winter issues that have surfaced of recent.

A normal bloom on another R. virginiana shown for reference. And dual prickles astride and below leaf on all of my R. virginiana. My R. carolinas have same diagnostic but also common to have an odd prickle between leaf nodes. 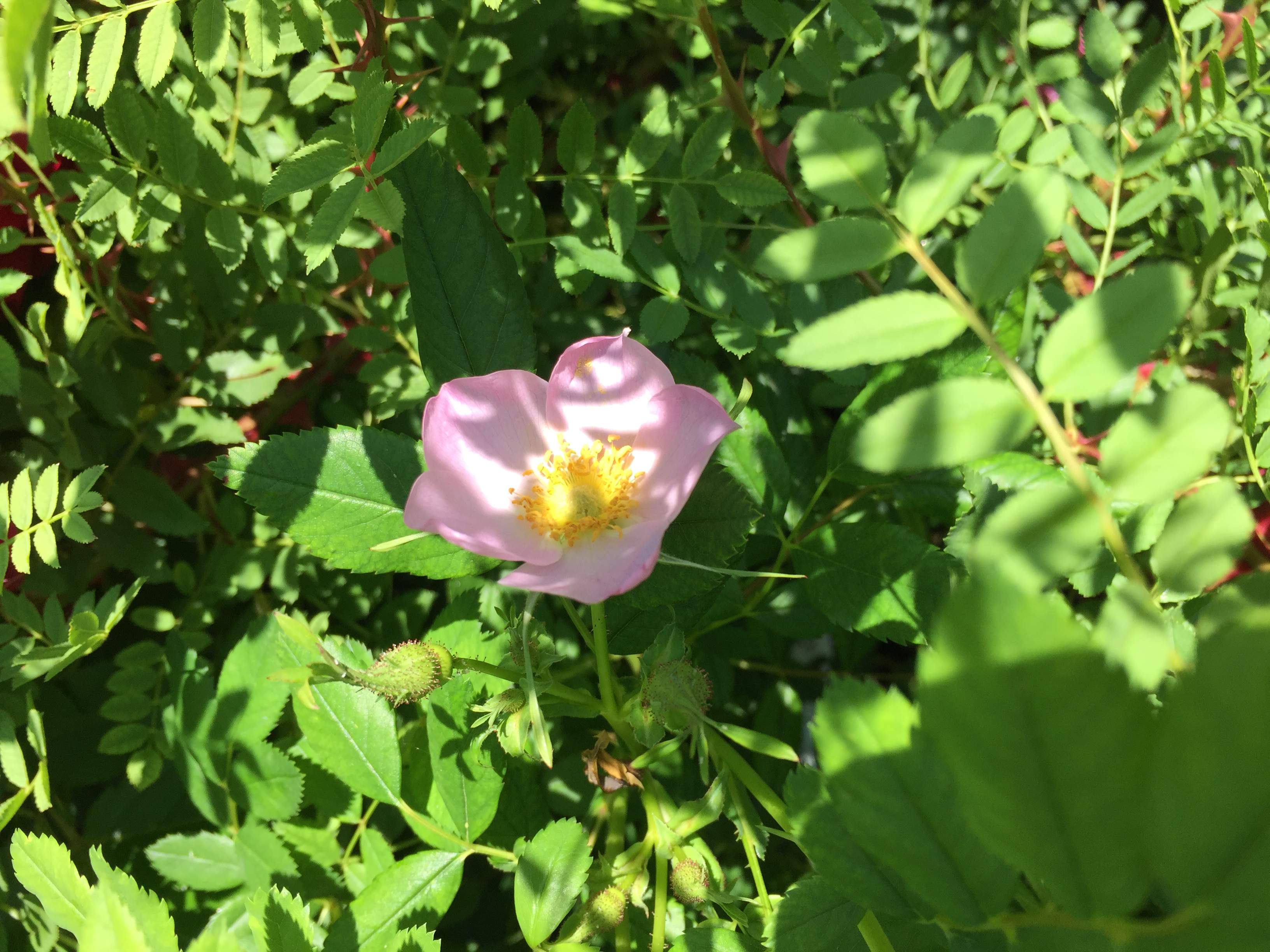 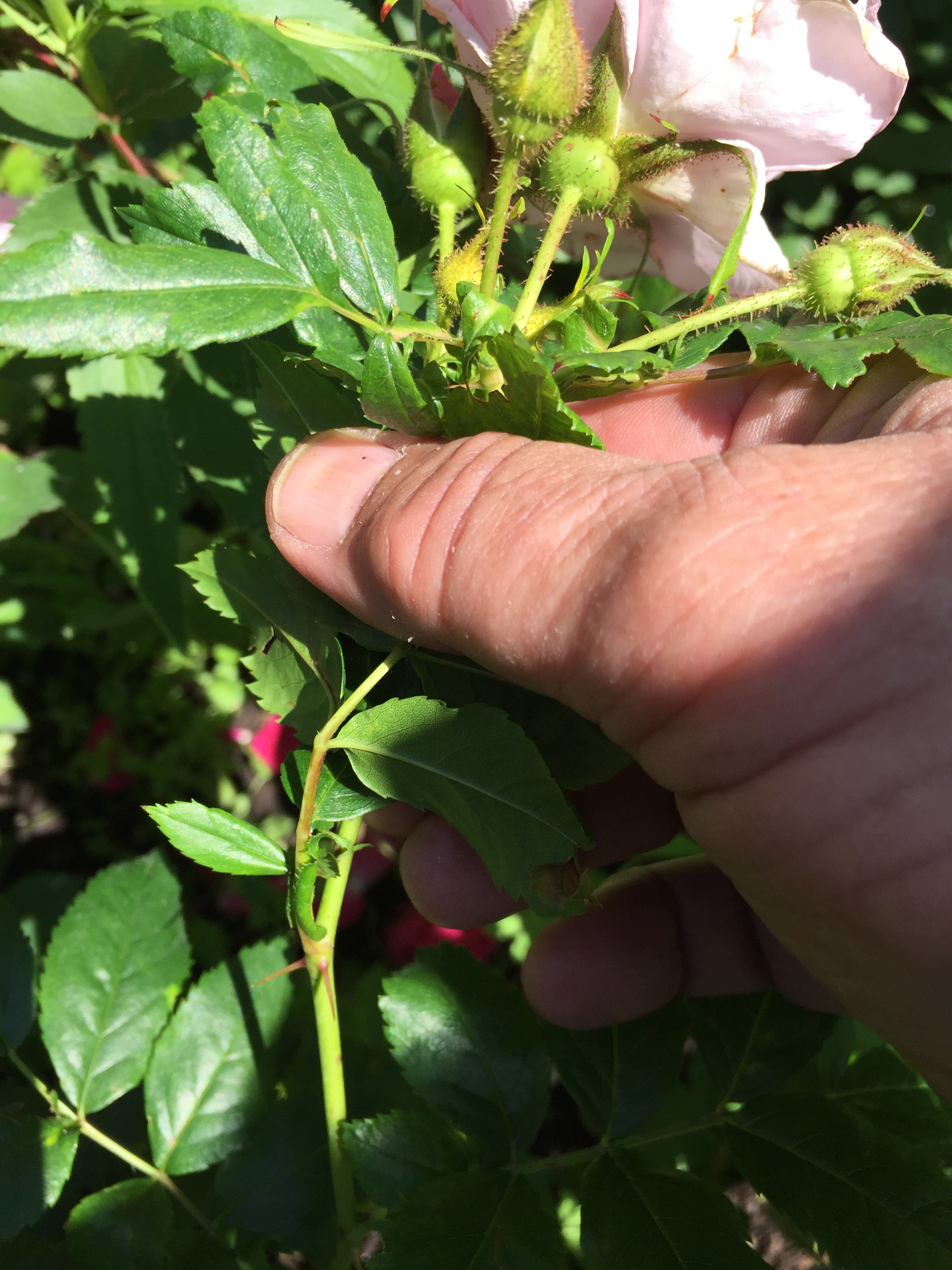 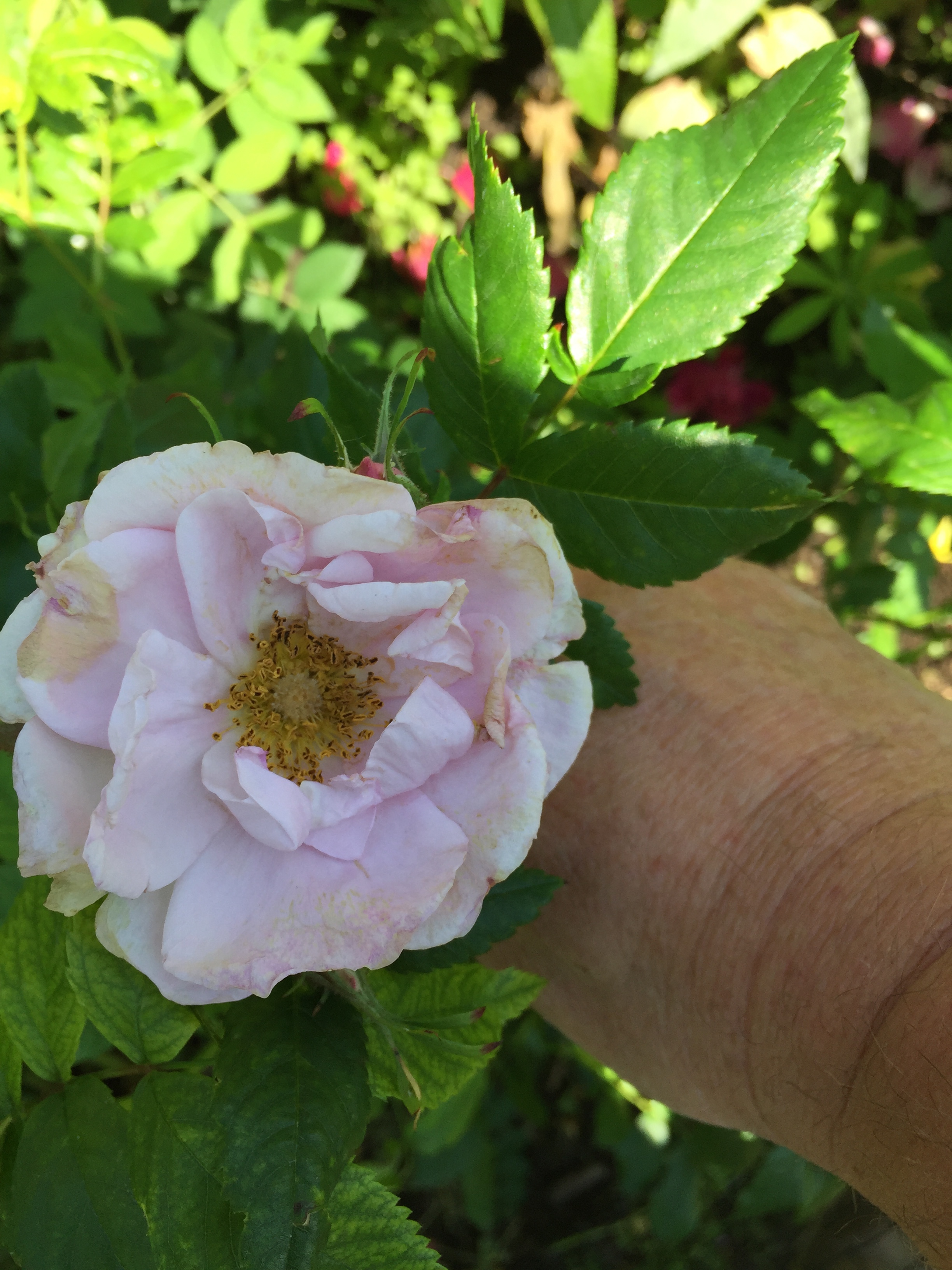 Very nice! Such a pleasant find.

Congrats! Now to identify which parts are double and root a cutting.

There are a dozen buds plus in the waiting on a number of canes. And to be proven wrong, the majority have the appearance in bud of going semi-double. Being slightly impatient, I partially forced one on another cane and it seems to be semi.

With rose now in full sun via hard pruning the neighbour, l am going to monitor to identify extent. Hopefully not going to have to eat humble pie … again … and not morphed into some other forgotten rose … original copper weathered patina R. viginiana label still in front of rose.

After bloom l will take cuttings … somewhere l read alba (well nearly) “sported” rose versions can be good candidates for hybridizing, l will extend that to bi-colour, so will also cross (M) with any hardy shrub pollen - whatever available. 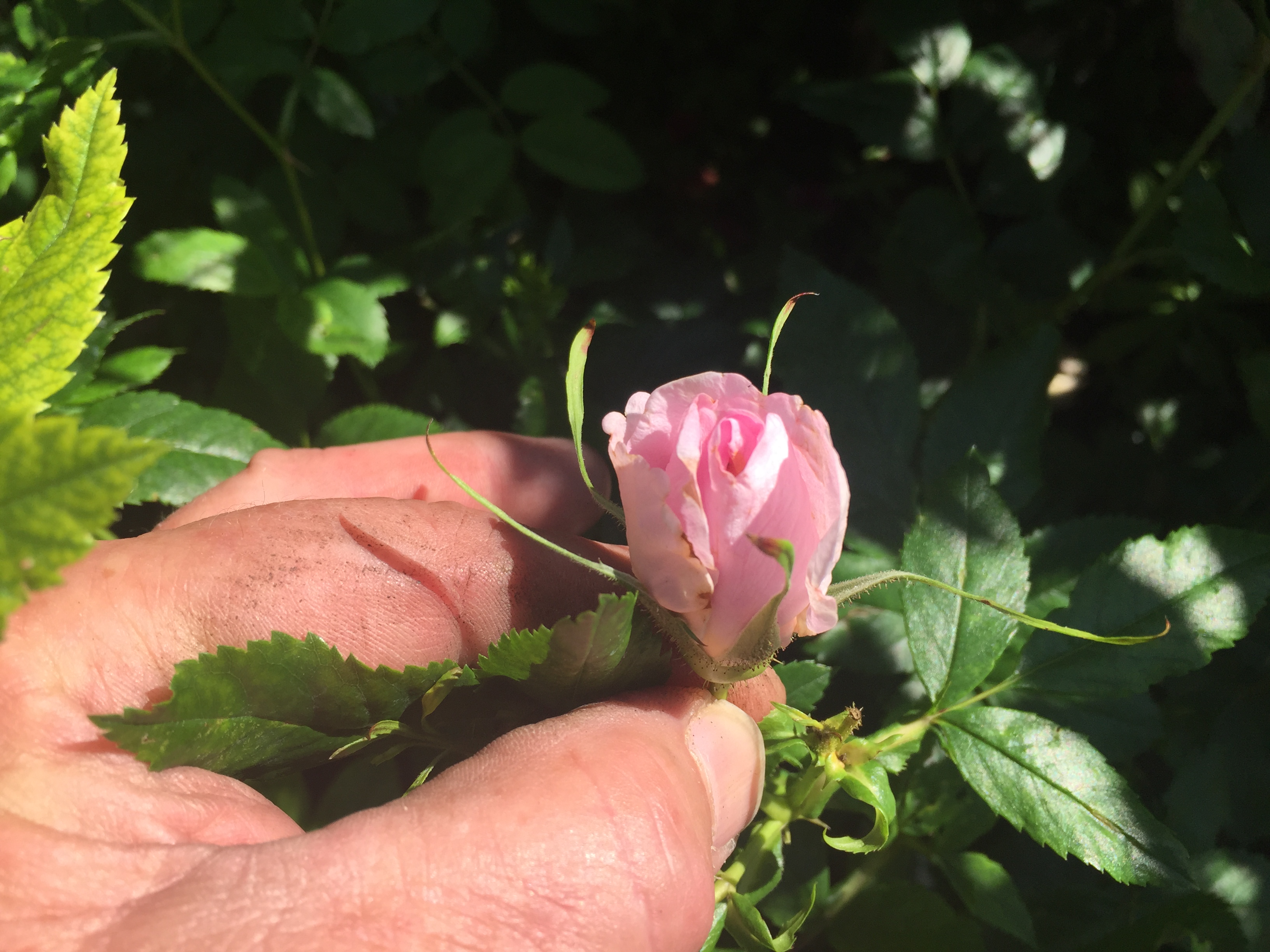 Well taking the pessimistic view it must be another rose came into the exact same spot - it happened to my last Red Dawn - was (The) Hunter.

I take this opinion for now because can’t believe a whole rose became unstable and sported, plus id’ing a new diagnostic fail. This view point is in spite of the canes, leaflet count, gloss level - colour, leaf margins and stipule being the “same to extremely close” to my eyes to example standards.

The diagnostic fail is the underside of leaf petiole has no prickles (unlike Rc and Rv). Though l suppose one can argue it can not be proven not to be part of sporting on a significant scale.

Against it being original rose example rootstock, the rose was purchased from CH nursery years ago and was not grafted - my other Rv and Rc do sucker with Rc and Rv close to taking a bed over.

Photo is of another cane bloom today - slightly forced. It shows definite semi double - all other cane blooms will likely be semi double. Bloom also shows what l assume is a sensitivity to “water damage” (balling) that my Rc/Rv do not have.

Though one diagnostic fail may not be enough to offset id closeness . The whole bush sporting and experience makes my skepticism rise to the surface.

Still plan to follow through with cuttings and pollinating because its “close to Rv and Rc” and on the plus side, l ‘ve not run into this type of un-id bloom on wandering rootstock (usually R canine or Dr Huey - multi flora just passes). Also l can not remember a rose l planted in tender experimental stage that looks like it … random HPs still pop up and bloom after 5-10 years of no show of green.

It is staying in garden for study unless winter eliminates it.

Went to HMF canina and back to 1652, found a viable alternative candidate to sporting of Rv … bottom line could be an “exotic” canina rootstock, or an import that disappeared, on that rootstock because never order canina varietal exotic … only semi double canina with all the attributes l id to-date. Like “spontaneous infusion of nature into unassisted by art” poetic license descriptor from 1808 book quote in HMF.

Nice buildup that preventing shorting the study and my shovel from being activated.

Specific Character. Rose with roundish seed-buds, and smooth peduncles. Flowers semi-double; the outer petals are whitish, and spreading; the inner are of a pale flesh colour, and unclosed. The stem and petioles are prickly. Branches slender, and flexuose.

This elegant little Rose is a most desirable variety of the wild species, and would be extremely ornamental if trained against a wall. We have not been able to learn for certain by whom it was first cultivated, but are inclined to think it the spontaneous effusion of nature unassisted by art; and are rather surprised that it should not have become long before now an object of general culture: but, as we understand it is rather shy of flowering, that in some measure
accounts for an otherwise apparent neglect of beauty. We have no doubt, however, when it becomes abundantly cultivated, it may also prove a plant of freer bloom. From the light, airy, graceful character of its flowers, we are convinced that to be sought after it need but to be seen.
Our figure was made from the only plant we have ever seen in bloom, at the nursery of Messrs. Whitley and Brames.”

Oh should excuse myself as somebody in history claims the historical drawing in HMF is really a variety of R. carolina … l forgive myself

Bush shot - the white and unopened buds mark extent of canes - gap between leaves makes me wonder if it wants to climb - can not get better shot without taking down rabbit fence. 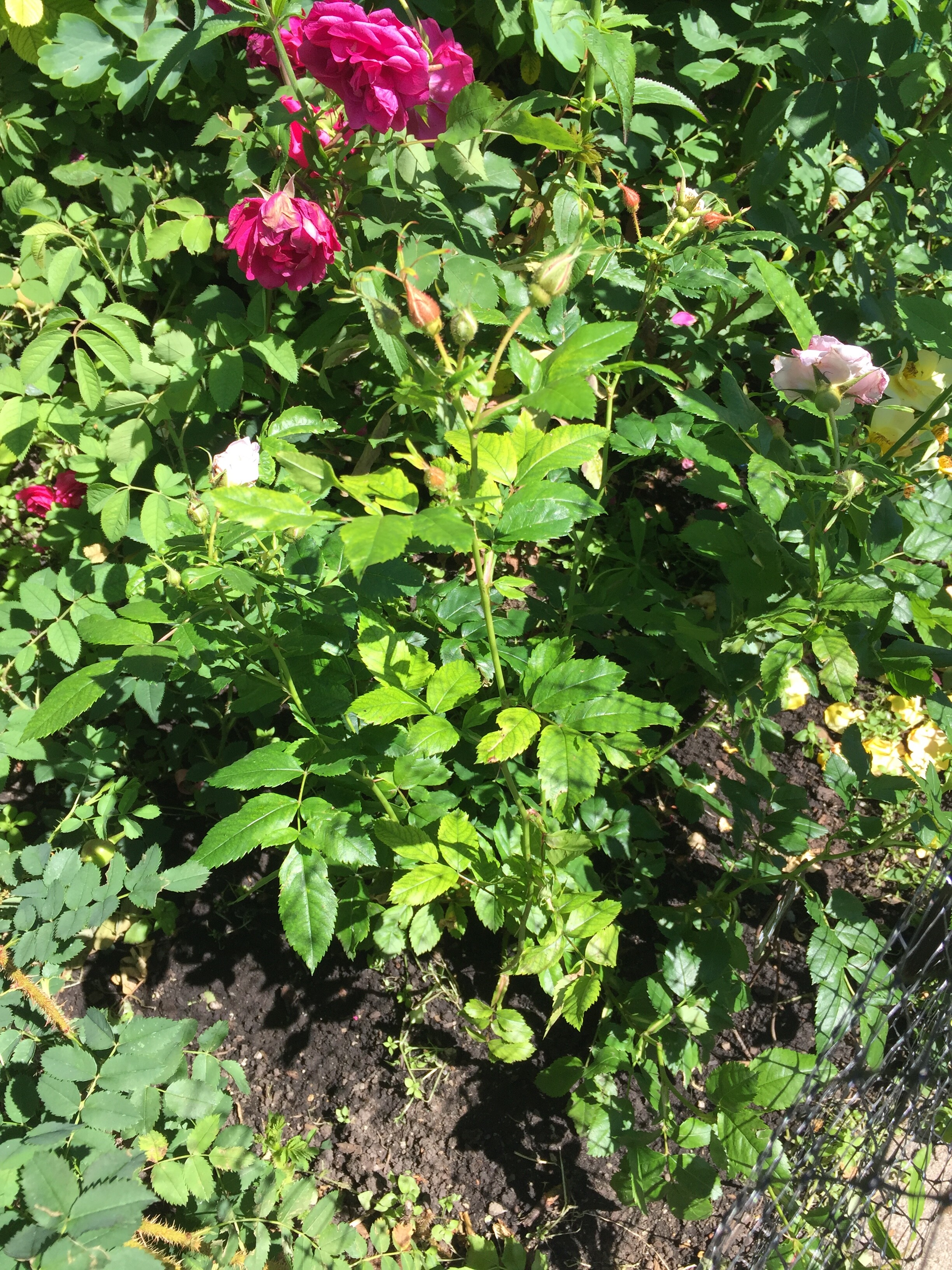 Hi Rick
Congratulations on a cool find!
Hope you can get a cutting to root.

One written technical faux pas, vs my previously stated, is the study rose has NO petiole prickles.

Caveat: <<5% of leaf petioles have, but only one prickle that are small and poorly developed.

The 1807 exotic canina (pleno) description notes them appearing on the petiole, as well as on canine examples in my garden (ID by somebody who knows species). My Rv/Rc have prickles as multiples on every leaf. Canina in my garden are rootstock, two examples - one went 10 feet high on a single cane, bloomed but started over this spring as did second more bushier one.

This lack of prickles on the petiole, bi-color and bloom type, seem to be the only two clear distinctions setting the study rose apart from the two separate species standards.

I wait to see if hip shows the common canina or Rc/Rv influence - what l see so far in development is it leaning to a rounded hip (like Rc/Rv).

Photos of canine example under side of leaves in my garden (north side garden) and study rose. Study rose now attached to a obelisk.

What a great pass time … this rose gardening … and “natural or art infused” creation identifying. Hope it is not a common rose dandelion - how embarrassing. 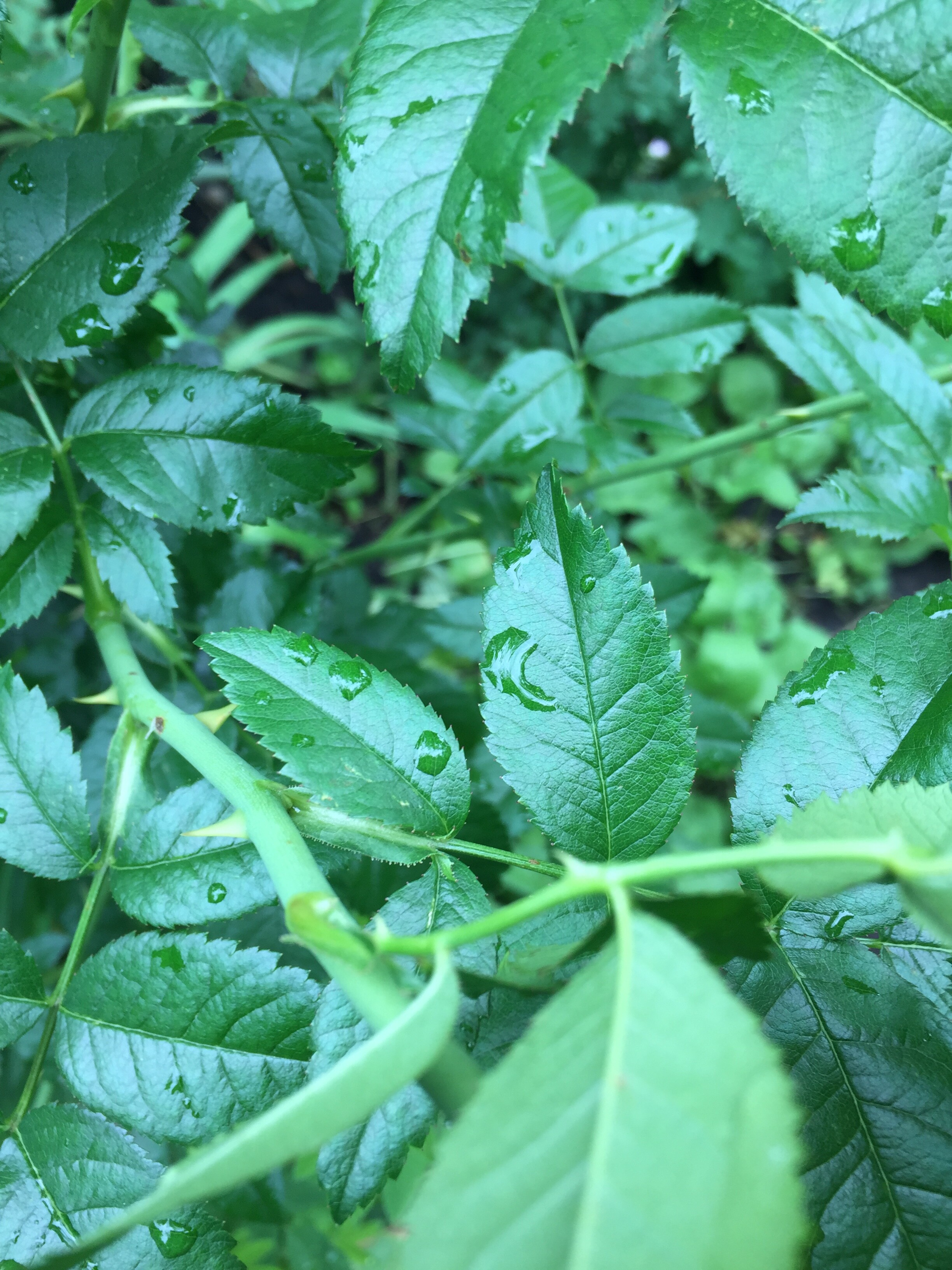 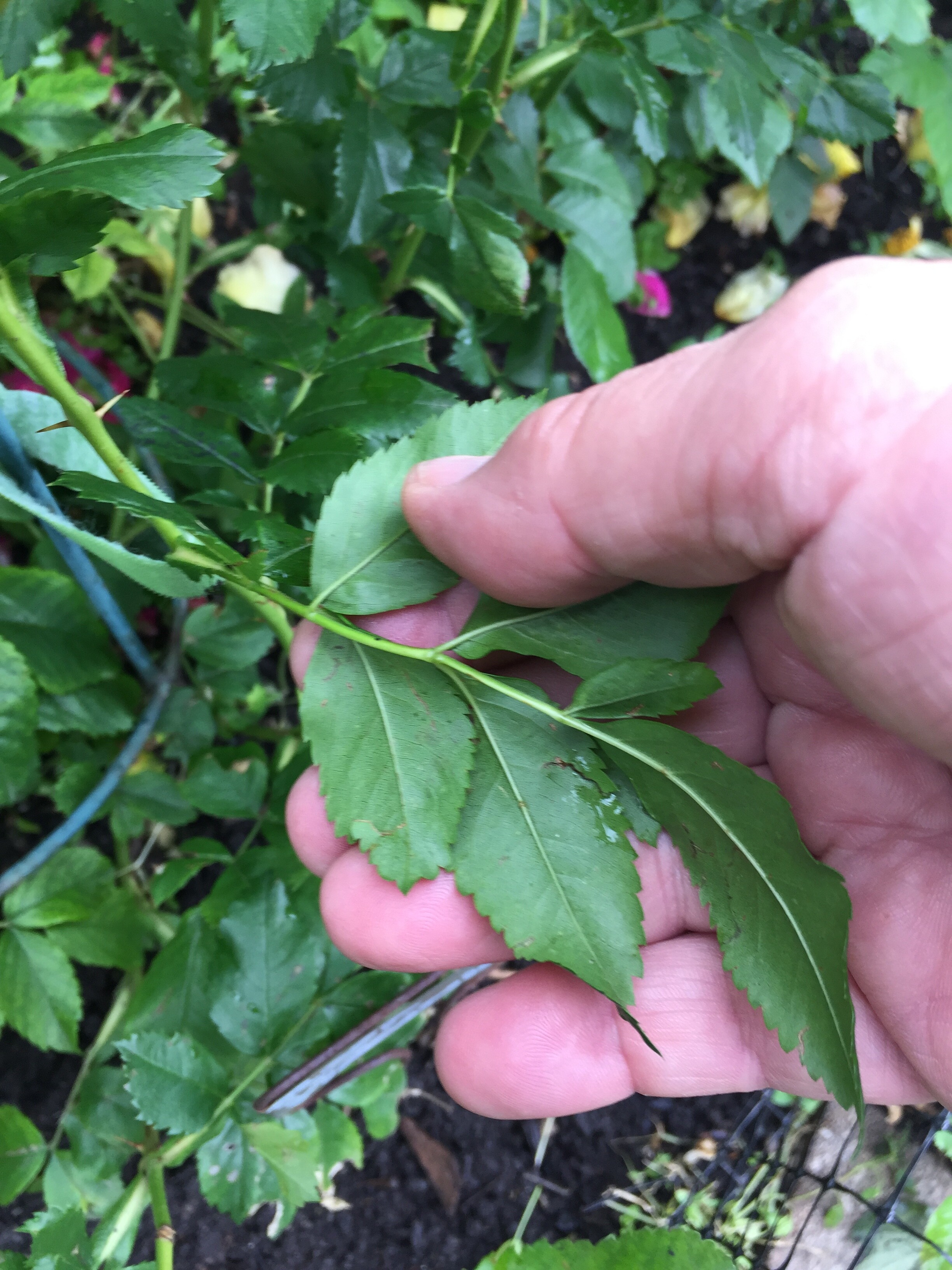 Txs Margit the saga continues, thanks for helping in the past with one standard.

… Margit, l like using Hawaii’s ABC’s propagation strategy (All Blocks Covered … by stores). Therefore l can send you a couple of cuttings (expedited) so it might have a better chance of propagating and long term survival. Last couple of years my propagation score been too low, so l not inclined to chance winter taking it out existence.

Case closed - with 98% certainty in my books.

To my eyes, when comparing to the “Old Rosarian” bloom photo and color on HMF it is dead on …

Now how does a R. virginiana decide after 10 years to change to a “Plena” ? … as a friend said pretty cool it showed up.

At least the tag was sort of right … needed to foresee I should of originally added “Plena” and waited 10 years to be right. It was not sold as “Plena” and was never semi double until now … got to love spontaneous change mysteries.