This seedling came from Jackie a while back, so no credit for me on this one lol, but I am very happy and grateful to have it! I’ve waited and waited and I’ve finally got to feel the satisfaction of a species hybrid seedling blooming for the first time. This first bloom opened up recently and caught my surprise because I didn’t expect it to bloom until next year, as it is from 2012 and only two years old. No fragrance detected so far but the foliage is very fragrant and smells of conifers and pine trees, which I love. Never had a trace of any disease issues so far which is something to say for a rose in hot humid Southern Louisiana. The leaf shape definitely appears to be intermediate between the parents however it is extremely thorny. I plan on doing crosses with my repeat blooming thornless tetraploid in order to recover those recessive thornless genes from Foliolosa and to bring the ploidy count up. I harvested the anthers but there was not even a bit of pollen release. Maybe because it’s the end of August? Looks like it will be fertile as a seed parent though as the hip is already beginning to swell.

Anyway, I’m always looking for genetic diversity and I’m just really excited to add R. foliolosa and whatever is left of R. beggeriana in HH to my breeding program. 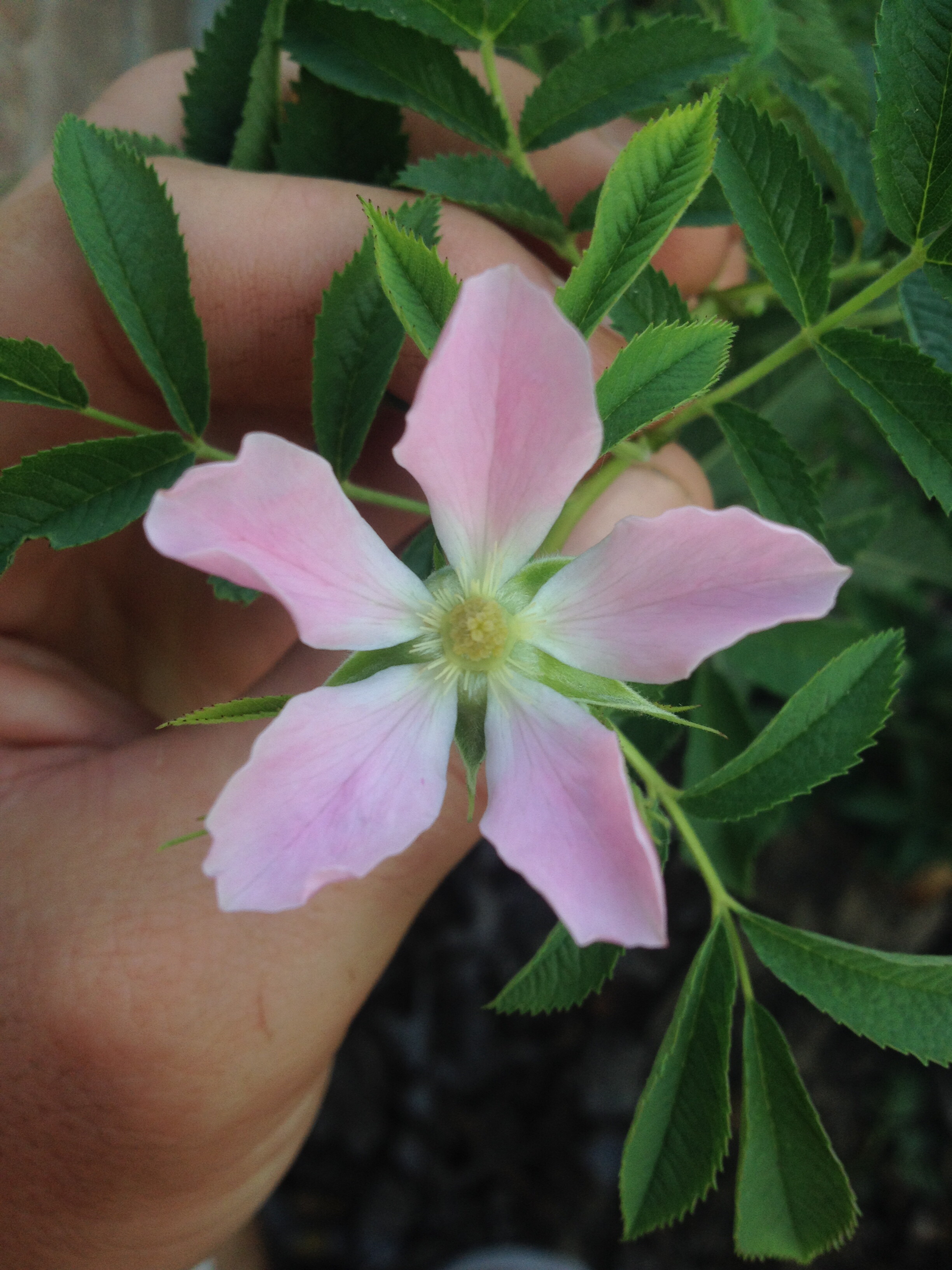 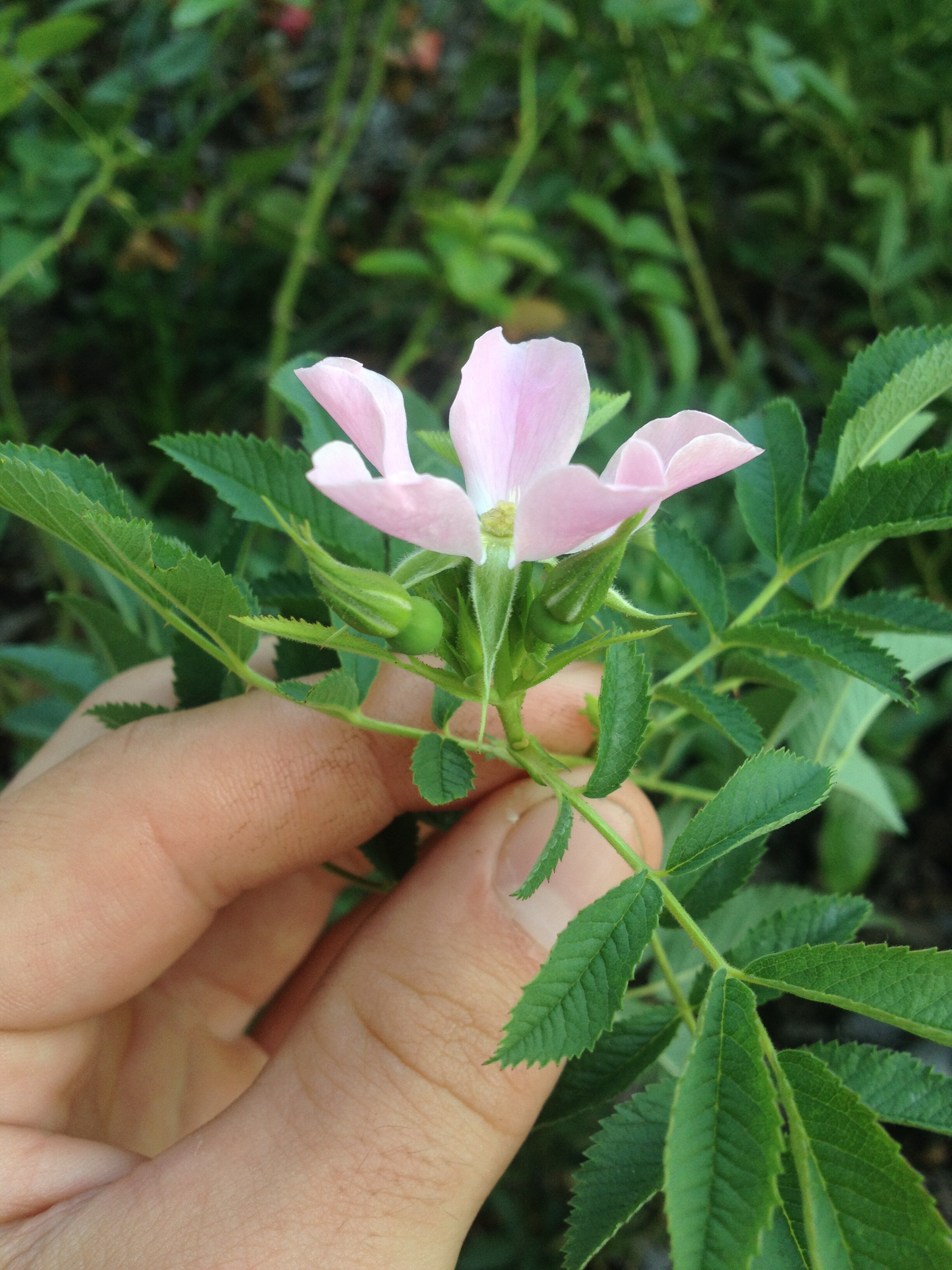 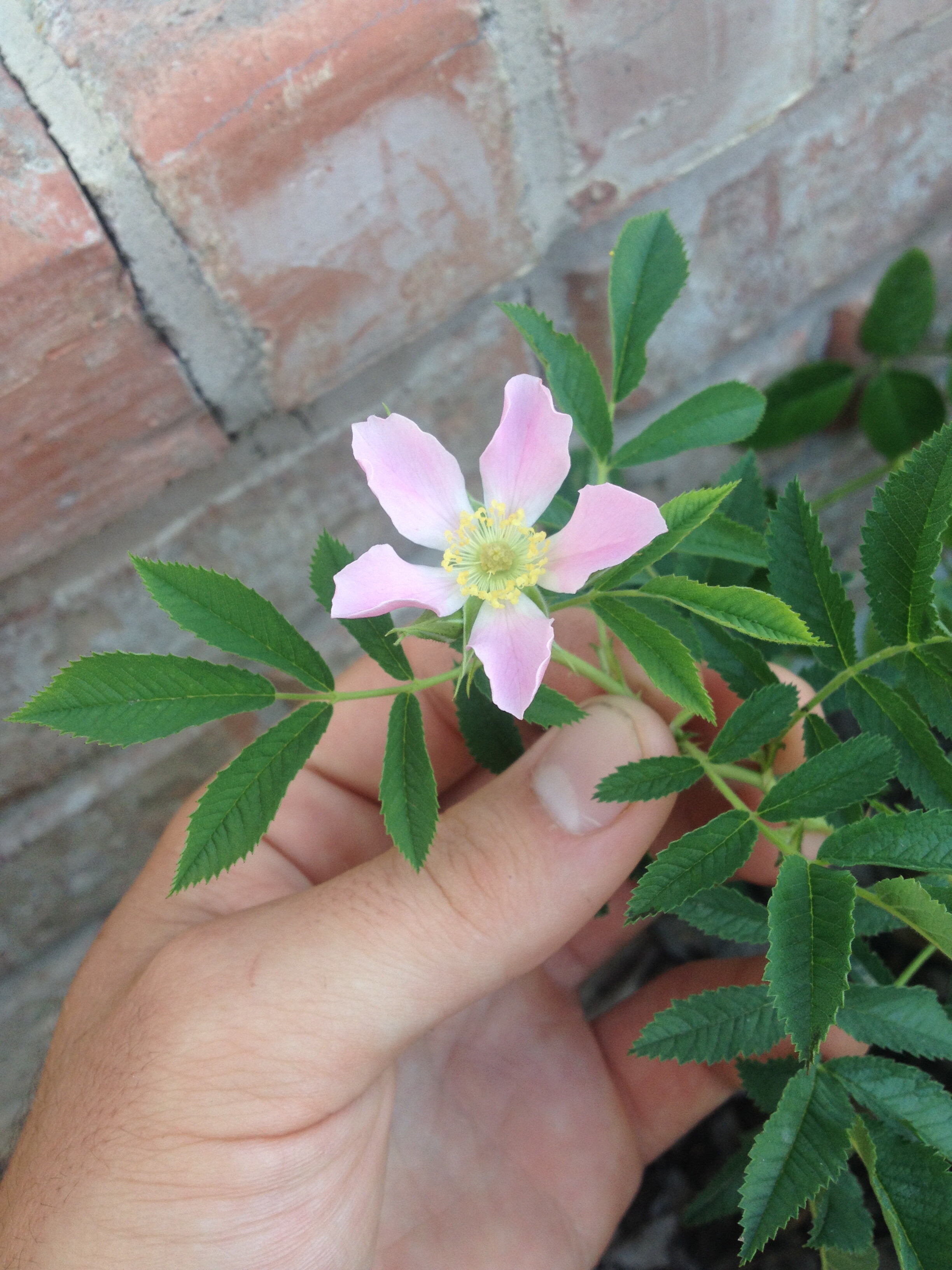 Congratulations! I believe that is the first of that batch of seedlings (from last yr-so not quite two yrs old-must have been an early germination if the stake says 2012-but that is Dec,2012) to bloom. I gave quite a few away since germination was really good. I am still awaiting the (now second) first one to bloom for me also. I did have one Acicularis hybrid x foliolosa bloom this spring, and it even produced 4 more blooms about two weeks ago. But it might be the weather, so I will watch again next yr. The foliolosa mother plant bloomed a bit in August at least twice so there may be some genetic stuff going on there for rebloom. So far my experience with the first blooms in Aug/Sept from 18 mo. old seedlings has been for them to go on and be recurrent or continual. But I have only 3-4 of these to speak of from experience.

I think I have 4 of the seedlings (one being with those oddly shaped leaves) and now that I see a bloom from this cross I can’t wait to get them to bloom. Good to hear they will/might set hips too since I want to carry forward the good health these seedlings are showing. Thanks so much for sharing these Jackie. And thanks for the pictures Andrew

Here is one of the same batch of foliolosa x HH that ended up with me. 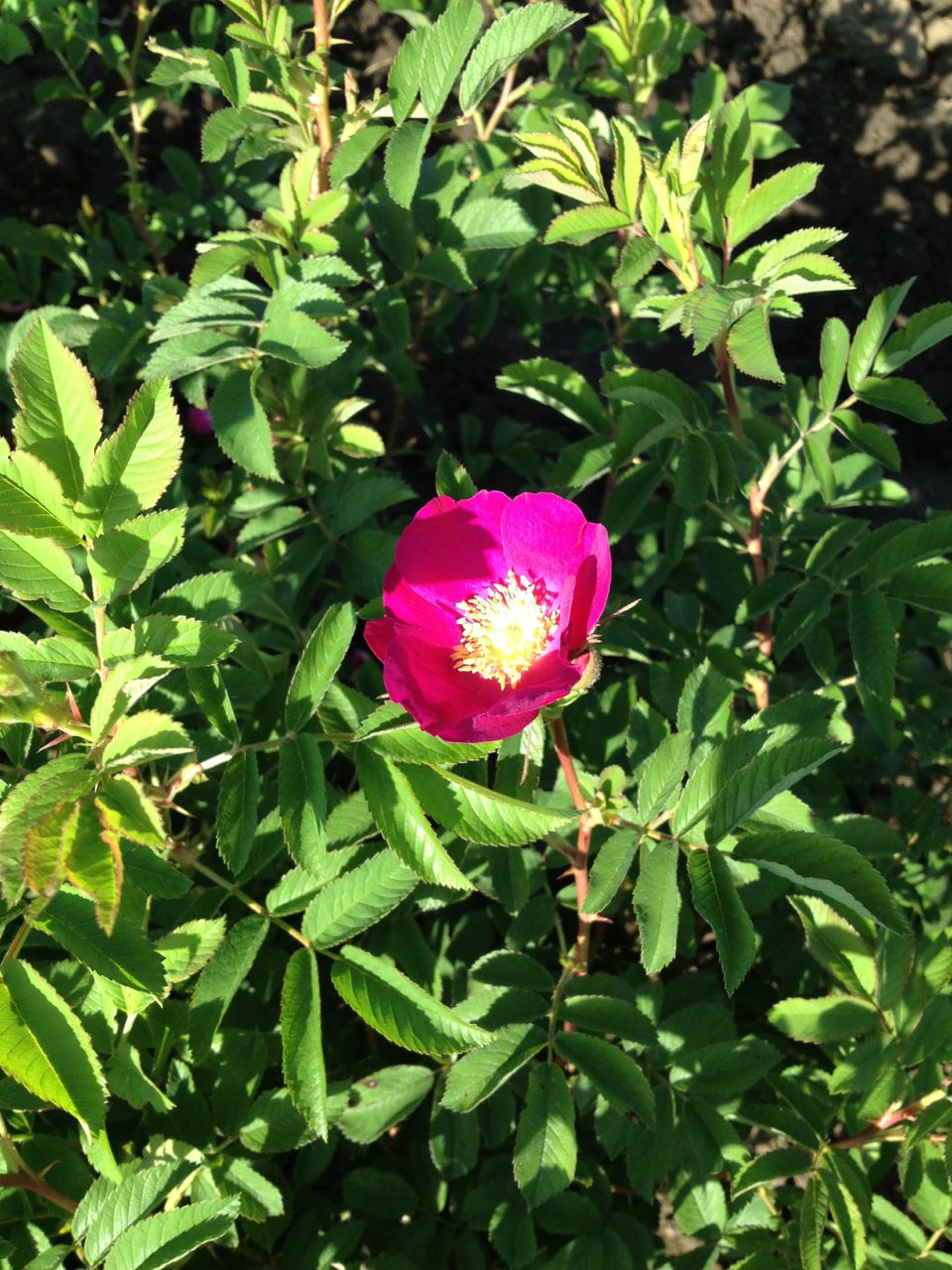 Jackie, was your foliolosa a dark color like that?

Thanks guys! Yeah Joe I can definitely see the family resemblance in the foliage. Have you tried breeding with yours yet? Here are a couple more pics showing more blooms: 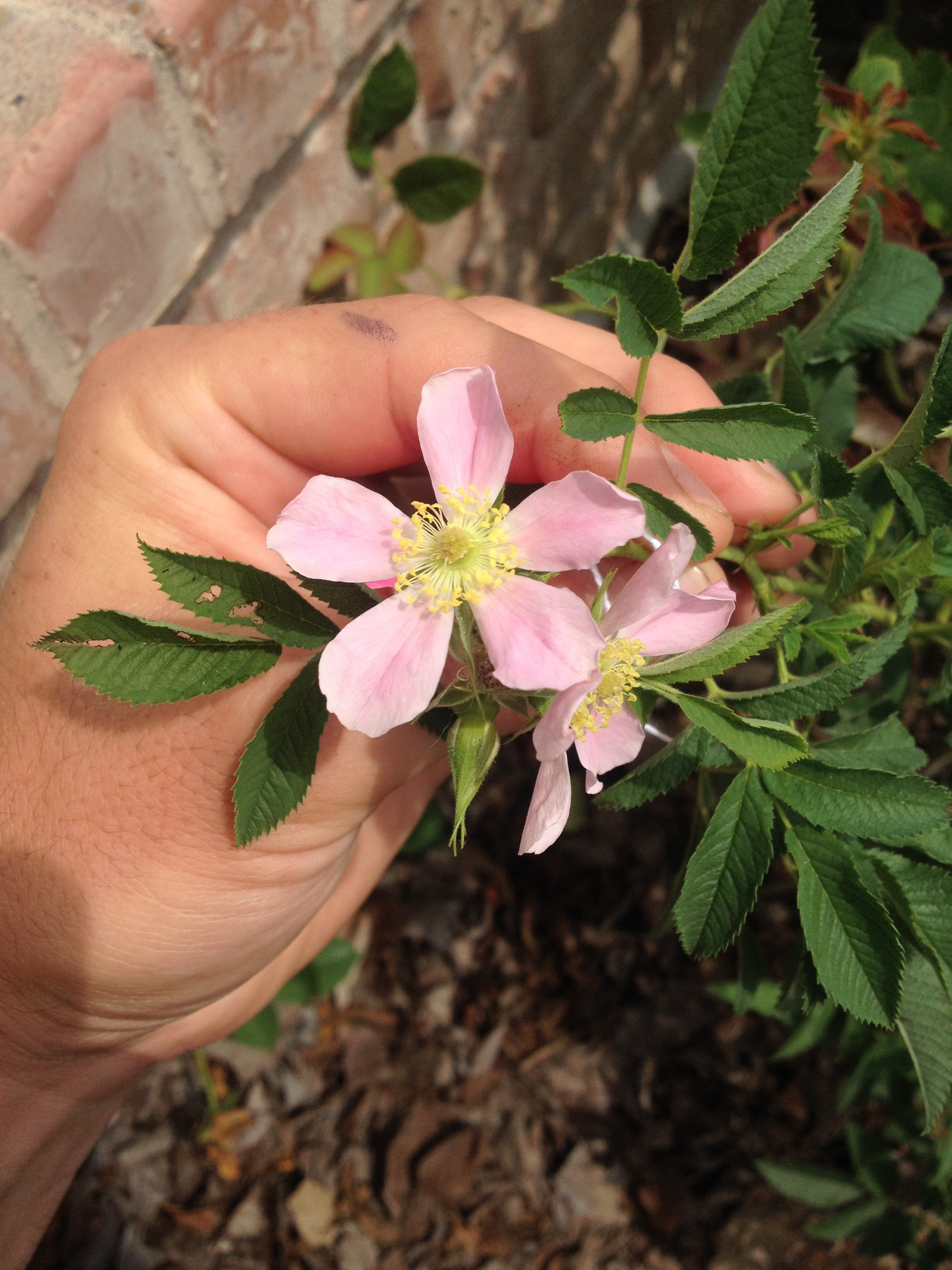 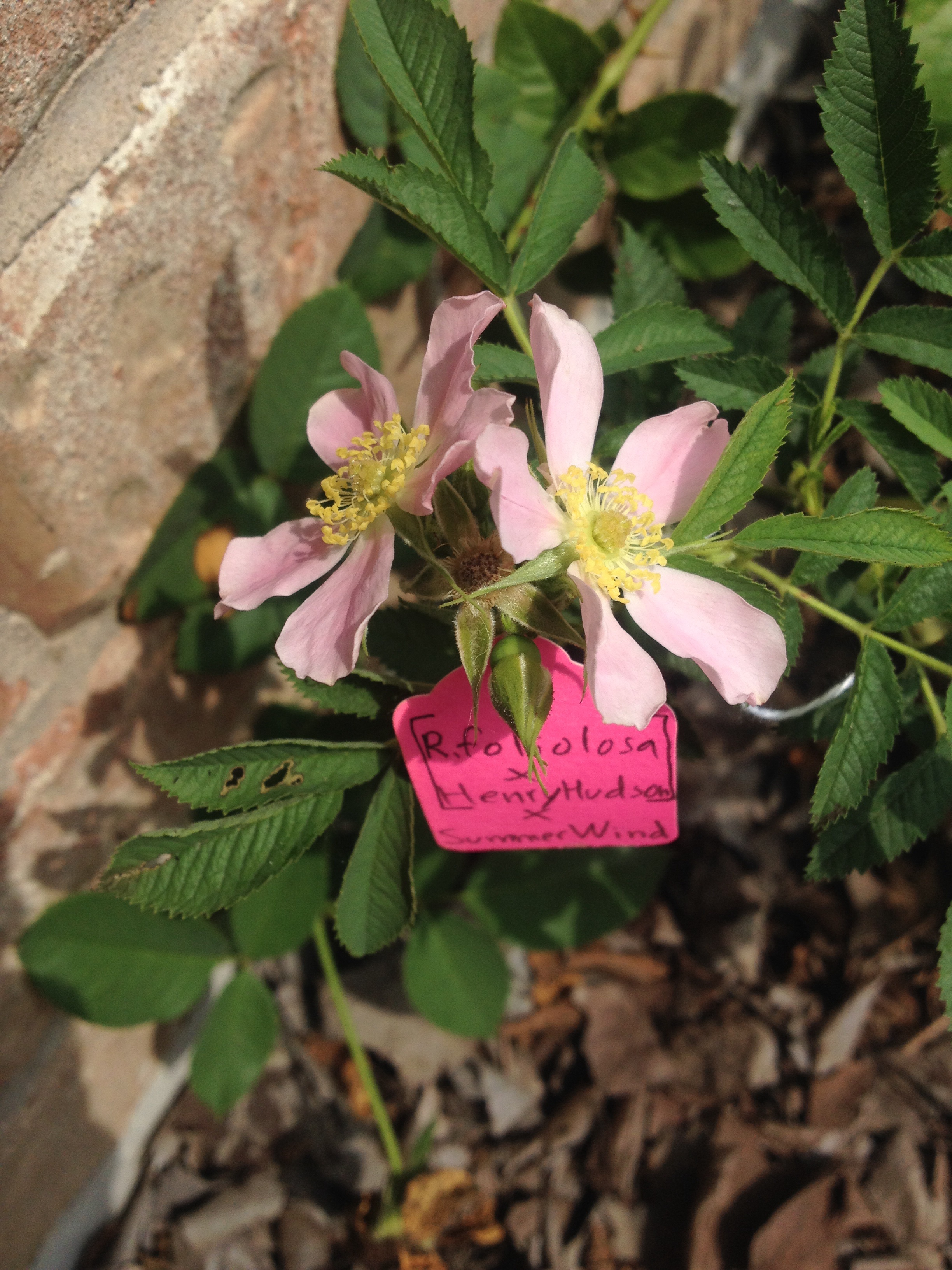 Andrew, I have several hips on one of them and I think it was probably that one. They’re down the row from several HH OP that are interesting but haven’t bloomed. Any hip set on yours?

Joe,
The parent was (the gophers got her) a bright medium pink with a similar flower form to your seedling. My Acicularis x foliolosa is very similar in color and form to yours. Some of the sister seedlings have quite rugosa like leaf texture, some less, but all more textured than foliolosa. I also have two seedlings this yr that are Cafe Legacy X R.foliolosa. Much finer textured, lacy leaves. Except for the little glitch with the ‘funny tread like leaves’ that I posted about previously, foliolosa seems very disease resistant. I did isolate and fertilize those with the funny tread like leaves and they all have taken on a much healthier color but the one that was most effected is continuing to grow bizarrely. The others almost look normal and it may have been the beginning of a nutrient thing excepting the bizarre one. I love the flowers on Andrews.