I’ve posted some other seedlings of this same cross but I was pleased to see a yellow seedling even if it is rather pale.

The form is unusual and there is a light citrus scent. I’m anxious to see what the blossoms will look like in cooler weather as I’m sure the color will be darker and there will be more petals. This is the first flowering 8-5-06 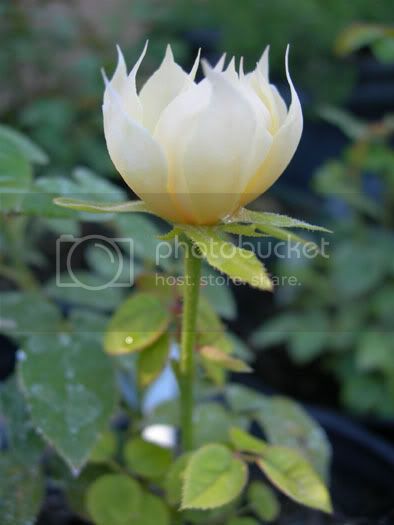 #2 reminds me of White Lightning. All 3 have nice colors.

Yeah, #2 is the most commercial looking for far. That was it’s first blossom. Our weather turned very warm after that so It’s hard to make heads or tales of anything until we get some cooler weather. I’ll probably bud some of these this Fall. That should help give an idea of what they will eventually look like more quickly. I should have saved the pollen from this yellow blossom but I was too fascinated to harvest it.

I have a blossom forming on Dortmund x Lila Banks. I only got one seedling from that cross. It will probably be a pink single but I’m on the edge of my seat till I see what I get.

Maybe you’ll get a small climber. If I ever get any pollen from Rosa banksia lutescens (I was supposed to this year but a snap frost ate the blooms), I will put it all on Carefree Marvel. It seems to be accepting a wide range of roses which suprises me.

I tried yellow banksia pollen this Spring on Riverbanks which is accepting a wide variety of pollen types and came up with nothing.

Yeah. I will definitely be waiting to see your results.

Do you think Im wasting time on Rosa banksia lutescens? I have it trained up an Austrian Pine to maximize space. Is the labor worth it? It’d almost be easier to use that same exact spot for your Lila Banks.

Lila Banks is a repeat blooming 3’x3’ shrub max. It easily keeps even in a 5 gal. container for use as pollen parent that crosses easily with tetraploid seed parents.

In my opinion it’s relatively easy to collect blossoms of banksia species as compared to giving space to a whole plant, especially in light of the fact that it’s very difficult to work with.

Lila Banks is apparently relatively tender to cold. I think Paul Barden lost the majority of his specimens in an unheated greenhouse last Winter.

I’m doing some crosses that may yield hardier cultivars but for now these hybrids seem best suited to milder climates untill proven otherwise.

I gather that the pollen parent of Lila Banks was nonrecurrent, no? I’ve been interested in attempting similar lines focusing on the yellow early on and hopefully maintaining/reinforcing some banksia-ness in the progeny. But wow, Robert, I hadn’t realized that Lila B. was a banksia banksia descendant. I thought she was from R.b.normalis. (Ya got pollen of R.b.b.? I thought she was stingey at best if not sterile.)

As a triploid, how difficult is L.B. to cross with?

And what R.b. traits are you maintaining in third or fourth generation descendants?

It is an unlikely hybrid. No one was more shocked than I was. If you ever see the rose you’ll see the affinity to banksia.

Lila Banks is strangely fertile as pollen parent. David Zlesak did a pollen ploidy test and determined the pollen to be unusually large. He speculates a large amount of aneuploidy may be taking place resulting in some loss of vigor in a percentage of descendants. Nevertheless the pollen is quite fertile with tetraploids and may also be compatible with penta or hexaploids. It is less successful though not totally sterile with diploids.

This photo is a newer seedling (Armada x Lila Banks #6)that shows banksia in the foliage more than most. Thanks, Robert 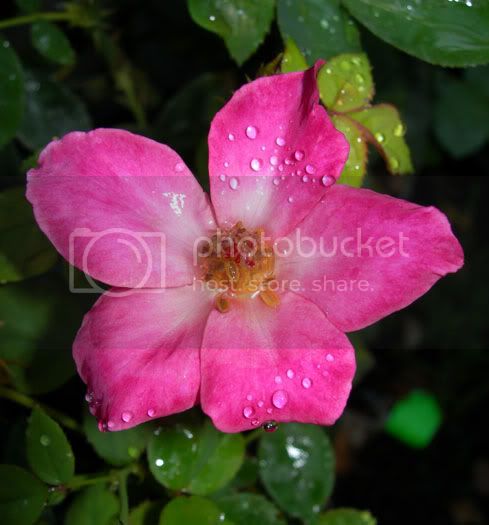 Hi Robert. Thanks for the link.

In it you mention Ophelia as a potential banksia hybrid parent. I confess that you have me wondering about a R.b.lutescens and “Talisman” descendant. (T is an offspring of O.) One of my interests in R.b. comes of the possibility of a short route to yellows in a relatively disease-free rose (for my climate), and I wonder if these two roses might have a decent likelihood of viable offspring.

Anyone familiar with Talisman in breeding? Its ploidy? Possible use with R.b.? (I don’t own T…)

It occured to me today that International Herald Tribune might be a decent seed parent. I was planning on ordering it out of curiousity but then I thought of some hybriding ideas for it and I thought of you, Robert, because it can pass on large trusses of blooms. IHT x Lila Banks?

I’ve thought of this too Jadae but IHT sets hips unreliably here for me. Still it should probably be tried. Seedlings should be healthy but I have to wonder how much the banksia would come though. IHT x Lila Banks would contain a lot of californica, not that that’s a bad thing.