Is ‘Mothersday’ a mutation of only the exodermis? it seems little used in breeding (excluding sports). Does the pollen show it to be a chimera with the endoderm still ‘Tausendschon’. This type of chimera happens alot in Irises when one uses colchicine to to double the ploidy. it may seem that I am posting alot but once in the city i use the internet i have only dial up that far north. thanks Johannes

Don’t worry Johannes, no one will take offense to the quantity of your posts! If anything, the activity on the forum is appreciated!

I second that!
Duane

Thank you for your support but has anyone bred with our lovely lady?

Is ‘Mothersday’ a mutation of only the exodermis? it seems little used in breeding (excluding sports). Does the pollen show it to be a chimera with the endoderm still ‘Tausendschon’. This type of chimera happens alot in Irises when one uses colchicine to to double the ploidy. it may seem that I am posting alot but once in the city i use the internet i have only dial up that far north. thanks Johannes

I have used Margo Koster, which is also a mutation of ‘Dick Koster’ and the same ancestors before it.

The majority were off-white seedlings. If I recall, I used it on (Shadow Ninja x (Remembrance x Double Knock Out)). It bleached the un-bleachable. The only truly significant progress the clan seems to have made is into some of the Kordes red roses. How far it went is unknown since they unlist many pedigrees after the 1980s. The results for me were enough to decide against using it, despite being an otherwise nice semi-dwarf diploid (with some mildew issues lol).

China Doll did show some promise. I got a healthy poly-flora with it, that I still have, but never used it because it didnt serve any purpose for me.

I have tried many polyanthas over the year. Many I did not use after ordering and growing them out for use, because most of them have a really nasty issue with downy mildew. Downy shows up easily here in May, and its something I get rid of readily since its easy for me to spot and cull out. Brittania comes to mind.

Some polys dont grow here at all. I have a Éblouissant that moves an inch a year. Nothing is wrong with it or the soil. It must be a UV + vigor issue.

I can see why The Fairy is the reigning kind of diploid polyanthas that has remained so long in breeding, despite its thirst for powdery mildew. Not only is it a good own-rooter, it can pass on reds and orange-ish, and it has enough petals to warrant interest to the typical garden enthusiast. I still hate the thing, but I can see why it has done well in history.

I think China Doll is worth a second look by breeders, despite its apparent plainness.

Thank you so ever much, Unfortunatly the order was already made with a group of folk so I can’t pull out now. Unfortunately I hate ‘Mothersday’ as a plant also -I just wanted a few genes. Well some mother this year may be happy. thank you Pacificjade for giving me more experience and your notes on ‘The Fairy’. Easier to get it in Canada. I am going to look for seeds HP. If I can recover the genes for red before the difficult cross it will make less number of seedling to luck out with. Johannes

It just very well work out for you. Its plant shape is its best attribute. If you can get around the color desaturation and powdery mildew hurdle, it may work out.

There are other avenues for diploid repeating semi-dwarfs. Most have a drawback. Snowcone, Mango Salsa, and Lemon Zest are diploid semi-dwarf mini shrublets. Snocone seems to carry race resistance, but its unfortunately a single white. Mango Salsa is coral, and can gets some minor blackspot, but is otherwise nice. Lemon Zest is a medium yellow semi-double, but its a little floppy. There are other options as well. There is also the option of simply making one from scratch. Personally, the biggest hurdle in this category is downy mildew. Downy is over-represented in synstylae types, and most semi-dwarf, repeating diploids are synstylae types. The majority of downy resistance was found through not only culling through the centuries, but also from the Dog clan + really random OGRs, like centifolia (according to a text, if I recall correctly). None of which are diploid. When my close friend raised many Purple Pavement x Leonie Lamesch, almost all had downy mildew in May. Not even rugosa is steadfast in breeding it out readily.

Hello Pacificjade
I am looking for a diploid dark red climber. If Mothersday cl was to have those genes at the right level it would have been perfect.

You might consider something really outside of the box… Red Cascade, a fertile triploid. 'Red Cascade' Rose

I once crossed Sweet Chariot x Margo Koster. I had a whimsical notion that I might get something mingling purple and orange. But no. One seedling grew well and rewarded me with bright magenta flowers in cool weather, but more commonly opened rose-pink and aged lilac-pink. Nice! The other had wavy petals of a very pale salmon. I assumed the color came from Margo. But no, again. 20-odd years later I was growing the purple Sweet Chariot again, and it sported to a pale salmon. The flowers were all poorly formed, but the same color as my long-ago seedling.
The trailing mini on the right is the pale salmon seedling. 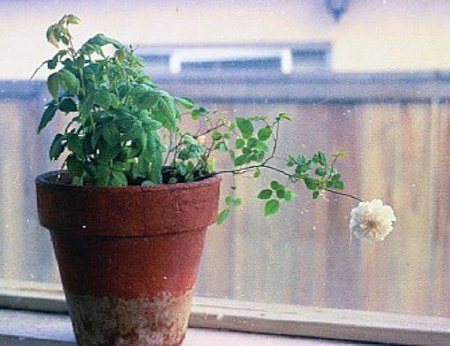 The pale salmon, badly formed sport above a normal bloom of Sweet Chariot. 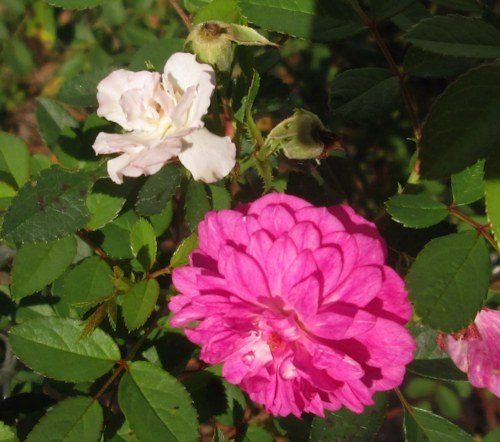 The whole Koster clan is unstable. They can revert to the sport parent, when the mood strikes. Here is a pic of Margo Koster apparently reverting to Dick Koster. 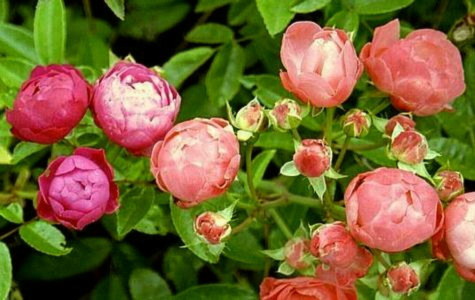 I once had a striped sport of one of these. The stripes were sharp, but the contrast was too low to be attractive.

Then there are the very common dark red sports from “White Koster”. 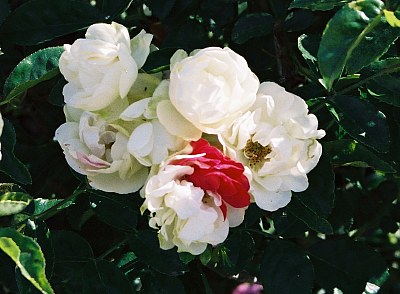 If you want to have half a chance of breeding from this crazy clan, you might try getting root cuttings to regenerate shoots. These are less likely to be chimeras, but no guaranty as to the color.

I did try to cross rugosa with ‘Adelaide Hoodless’ (triploid) seedlings looked like FJ Grootendorst or Rosa blanda one of the FJ was fertile but did not ripen I will watch this seedling in the future. But I did not note it as anything interestine in the flower so I have little hope. the cane was 6ft tall.

Diploid dark red climber? Chevy Chase can pass on rebloom and red. Magic Wand can pass on red. Although it had downy when I owned one.

Climbing mutations usually pass on so that doesn’t exclude Cl. The Fairy and similar.

Not really a lot of ideas to select from here, given limited distribution and a typically non-commercial combination desired as a parent.

Most often diploids now are either shrublets or climbing polyanthas grafted on tree roses to become “weepers”.

Although you can work out of the box. ‘Bukavu’ should give a decent portion of climbers. So you may want to consider “hybrid musks”, the greatest farce of classification yet lol.

hello, I am in zone 2a all these beasts would have to be taken in and their progeny would have to be buried and the hips would not ripen. If I have to go back to the subtropic Tea route, I would use ‘Henry Kelsey’. Ages purple, diseased but still is lovely.
Diploids are perhaps are limited in your climate but not this far north: Rosa rugosa and Its hybrids still rule. The first rose I remember was a ‘Betty Bland’.
I am being passed on some seed (Polyantha x multiflora relative)OP or possibly another polyantha. I have to agree with you on the hybrid musks thanks for the heads up

I wonder if you can do a cross similar to this:

But use a double red-purple zone 2 rugosa instead of R. r. alba. And if you get what you like, you could then self it and select out the darker, double, climbing variations. The only trouble with this is, like most rugosas, you have to wait more than a year to see if its a repeater.

i use and appreciate Rosa beggeriana. it is one of the best bridging species I have, having so many small flowers to pollenate. J

There seems to be more involved than a single mutation.
According to my research, the Kluis/Koster series of sports trace back to Louise Walter [Tausendschön x Rösel Dach] rather than Echo. Both picked up the name ‘Baby Tausendschon’, so confusion was unavoidable.
=> Greta Kluis
=> Präsident Hindenburg
=> Anneke Koster
=> Dick Koster
=> Mothersday
Etc.
I doubt that the whole series of sports will be retained in the ‘Mothersday’ you have now. But if you want to have a shot at making use of the red color, you might try raising some root cuttings. Roots have only one layer to the meristem, so there will be less confusion.
Of course, you may end up with some new sports, but that’s just part of the fun.