adding two more photos, sorry the thorns are blurry, I couldn’t get the camera to focus on them: look at the ones further behind and to the right.
The hips are somewhat long (conical) especially on the more mature bush.
By the way this is about an hour north of Spokane, WA. Canes are green to the tip after a late cold winter (for here).

Thanks for any thoughts!
Duane 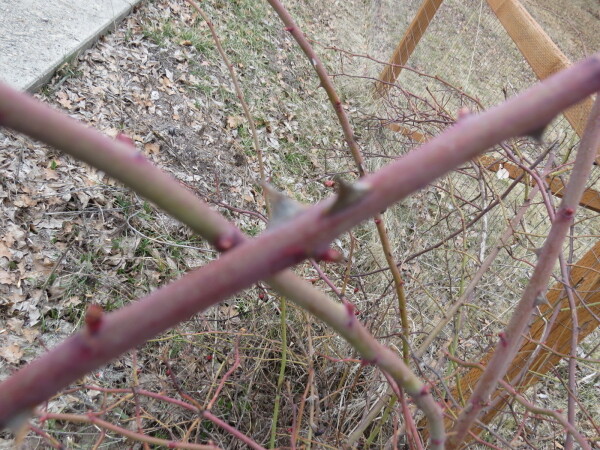 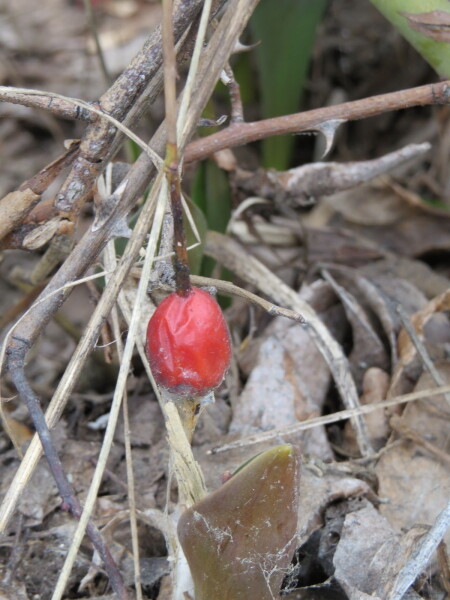 That lone hip sure looks like a canina after winter. My bushes, seedlings all, vary in thorniness, but generally more than you seem to show. But the reddish stems and buds swelling now is characteristic. Could these have been rootstock? My material came from a huge old bush in PA which was ID’d decades ago by a highly experienced rosarian as R. canina, probably rootstock (or from it anyway.) Usually the hips are in bunches of 3-5 or more, not singletons. Maybe if you let it bloom this spring you’ll be able to figure out.

It is possible it is a rootstock left from where the rose grafted to it died. I am used to seeing Dr. Huey all over the place due to that. I am not familiar with R. canina as a rootstock, so I’ll have to look into it. I’ll look on the other bush down the street for clusters of hips. When it blooms it may certainly help. THanks!
Duane

It seems like R. canina isn’t too common of a rootstock in the US. However, years back the Pavement series of rugosas first came to the Twin Cities region mainly from a Canadian nursery and they were grafted on R. canina. Over the years there have been a lot of instances where the R. canina sprouted up. Since it is cane hardy here (unlike ‘Dr. Huey’), they’ve persisted pretty well.

That may be the case here. I’ll be watching when they come into bloom, but for now is there something I should look for that would identify them as R. canina?

I found both roses growing along the river, having spread all over. In between the different varieties was another that looked intermediate. Could they have crossed naturally? Which caused me to wonder if canina would be useful in breeding, perhaps for less thorns or hardiness? It is tip hardy here. Do you know how hardy it is?
Duane