Miniatures as Parents of larger roses?

I figured I should start a new thread for this topic since it’s a little off of the “Best of the New Yellows” topic – that had made me think of this:

I haven’t used miniatures at all for breeding and was wondering just how often miniatures “throw” larger roses (ones that would be classed as Hybrid Teas, Floribundas or Shrubs). My understanding is that a miniature crossed with a larger rose will give a percentage of mini’s in that first generation. So, it follows that there are also quite a few NON-mini’s too, right??

I believe so. Watch this:

What I have found from being in a blackspot sensitive area is that the majority (at least 80%) of cultivars descended from miniatures are highly blackspot prone. Baby Love is one of the exceptions. It descended from the Nozomi line of miniatures. Other than rare miniature exceptions like Baby Love, I dont plan on using minis. However, I do like some of the shrublets and groundcovers such as Home Run or Carefree Marvel (the latter with beautiful, kordesii-like foliage!). The downfall is the current lack of color spectrum but I believe this will improve in the future.

I plan on avoiding that route by using shrublets

I can’t give any percentages, but I’ve certainly gotten large roses from mini’s. “SunQueen” is an open-pollinated (presumably selfed) seedling from “Loving Touch.” Her blooms are about 3 1/2" and she blooms in large bouquet-type clusters of up too 10+ blooms. 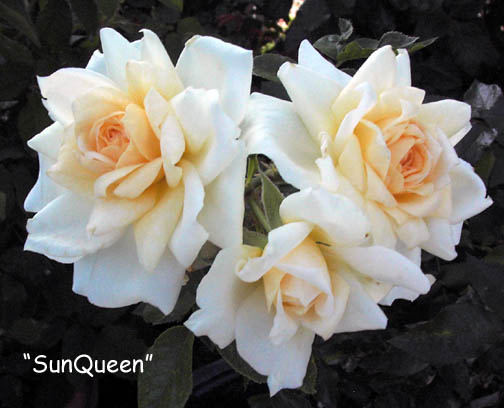 Jadae, however does bring up a very good point - those minis are pretty serious disease magnets.

If you want actual statistics, I would suggest that in general, about 10-20% of seedlings grown using Miniatures as seed parents will be larger-than-miniature plants. This varies, of course, depending on which variety is used.

Paul, if you would, do you know any miniatures that pass on good resistances? Scarlet Moss seems okay but it isnt a true miniature.

I bought Rosy Future this year as a substitution for Hortico’s mistake (I figured that since it was small that I could find a spot for it). It is not a true mini. It is…kinda like a dwarf floribunda raised from minis. It it highly fragrant. It seems healthy so far, though.

I believe disease resistance comes from either parent, so that Blackspot resistance can come from a wide variety of Minis if you use the right pollen parent on them. I have found good disease resistance among seedlings from crosses of Teas on Minis, and Rugosas on Minis. I suspect some of the Hybrid Musks and Minis would fare well also.

However, to be perfectly honest, at this stage I am almost done using Miniatures as seed parents as I am not looking to breed new miniatures. Also, the percentage of dwarf offspring from crosses using Minis in conjunction with large shrubs is too high, and I have to grow far too many seedlings to get what I want. I find I am now using far more of my own seedlings and un-named seedlings from other people’s breeding programs in the search for superior disease resistance. I am convinced that excellent Blackspot resistance can come out of R. wichuraiana hybrids and so I am pursuing that line of work with a vengeance. Oh, and I am still working with Gallicas, since they too pass on superior Blackspot resistance to many of the offspring.

Wow! Thanks everyone, for all of the very useful information.

I had gotten the impression that Baby Love’s resistance to blackspot, had come from Rosa davidii. I’m not familiar with Nozomi’s disease profile, but from my (fallible) memory, isn’t it a once-blooming, low groundcover type, derived from Rosa wichuraiana? So, are you thinking that Nozomi may be the major source of the resistance?

Have you tried any crosses yet between those two types [wichuraiana hybrid and gallica]? I’ve grown Cherry Meidiland for a while – which is fairly disease resistant for me (but not a wichuraiana hybrid, I realize). And I’ve also grown Bonica (the shrub), which IS derived from wichuraiana. Although I didn’t grow most of the seedlings to maturity (I was focusing on other things at the time), it seemed that both of these “nicked” very well with gallicas and other OGR’s. I would imagine that wichuraiana hybrids in general, would follow this pattern.

Nah, Im thinking that having a healthy miniature as the source of the dwarfing is helpful in the entire process.

It seems as if using some of Moore’s older stock that isnt cluttered with disease prone older floribundas and is close to R. wichuriana may be helpful. I know that Simplex is quite disease free even tho the blooms are boring. Spring Song, too. Another interesting thing to note is that Baby Austin is a descendant of Rosa soulieana!

Three new ones seem pretty healthy in my area: This is the Day, Playgold and Caliente. Whether or not theyre very fertile is not known to me. Playgold is interesting at Heirloom’s garden because it looks nice when it is obvious that all of the other mini’s are stressed.

I have used the mini ‘June Laver’ a lot for my crosses with other minis.

I stay away from using HT’s as pollen parents as J.L. has a HT as one of it’s parents which gave me a number of HT’s and Fl. in the past.