I was going to put this in Above and Beyond thread, but felt like it may have hijacked the thread. I have with the F1 Virgiana/ Kordesii produced a F2 inbred Hybrid. The original F1 obtained a height of 3 feet high and 4 feet wide, leaves are glossy and dark green. From the five seedlings, two show tremendous vigour, leaf size has tripled in size with a matte finish. One showed a more compact type growth with light green small foliage. The other two showed strong traits of the original F1 cross. These are a group of photos showing the original F1 cross with the remaining three , the F2 inbred lines. The stakes are 8ft high, seedling is 10 months old. 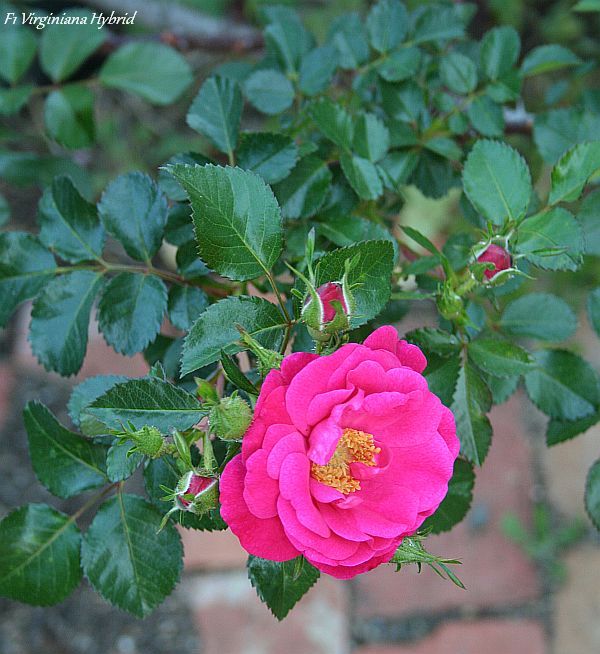 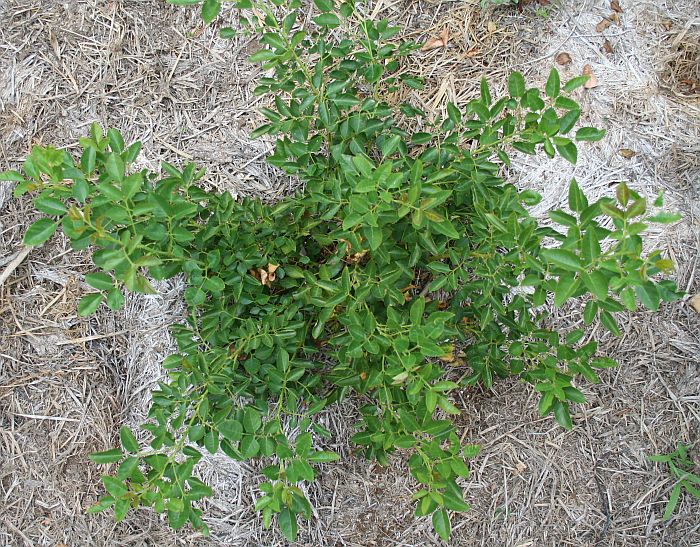 Thanks Rob, I am just wondering how much growth there will be there by the end of the growing season.

May I ask what the popularity of rosa virginiana is. I hear about it much in the forum but not much about its virtues. It is unlikely to survive in my climate so this question is purely out interest. Thanks

The foliage of your hybrid pictured above in flower is gorgeous and the flower is very nice too! Congratulations!

R. virginiana is surprisingly hardy here in Zone 3, although maybe not right to the tips. Last year’s severe winter seemed to cause dieback, but later in the spring you could hardly tell. I would conjecture that it would be able to bloom every year in your climate.

In my opinion its best characteristic is the lovely, shiny foliage. Great vigor. So far not much spotting for me, either blackspot or leaf spot. Tetraploid. Supposedly more amenable to allowing non-pink colors to be passed on than other species roses. I think there is potential to select or breed towards thornlessness. Very lovely display of red or orange hips in the fall. I’ve really been impressed with seedlings that have R. virginiana as the pollen parent; great vigor and healthy, shiny foliage (so far).

Negatives: rust, mildew, suckering. My favorite plant this past spring later in the summer became a rainbow of rust and mildew.

R. carolina is very similar. My plants of R. carolina seem more resistant to mildew, so I’ve moved towards breeding with them more than R. virginiana.

If anyone in the USA wants R. carolina or R. virginiana seedlings this year, I have a lot of extra 1 yr bare root plants that I’d be happy to mail out come spring.

Thanks for the comment David, out of all the Virginiana hybrids I have, this is my favourite. It is only once flowering but it goes for a good period of time. The perfume is amazing, very strong Damask type. All I have to do is get one of these hybrids to repeat flower for me and I will be happy. The foliage also gives good fall colouring with orange yellow with the added bonus of abundant bright orange hips. I found the F2 accept diploid pollen very easily as well.

Rust and Mildew I have never seen any of that on any of the F1 or F2 seedlings here at home. Some do sucker but it is controllable. Those seedlings you grew from seed I sent you did they develop into any thing and how was the cold hardiness of the canes in your zone.

I have R. Carolina growing in my area and it hates it , I feel it is to hot during our summers and it does not tolerate. As a 4 yr plant it is only 2 ft high.

Who knows what circuitous genetic paths our respective plants of R. virginiana and R. carolina have taken…that’s one thing everyone should keep in mind when talking about species roses. One person’s R. virginiana might be very different from another’s. That’s why I’m trying to grow out large seedling populations of both and select for health and thornlessness.

How do rugosas do in your climate?

Suckering, as I saw someone mention here on the forum, is luckily not a terribly persistent trait when you start breeding with non-suckering roses, so that’s good.

The seedlings from your seed are still in the grip of their first winter. It might be a tough one, because although we have not had super cold temps for extended periods like we did last year, we have had very little snow cover this winter. It was -33 F/-36 C last night, which was probably the coldest night so far this winter.

“Who knows what circuitous genetic paths our respective plants of R. virginiana and R. carolina have taken…that’s one thing everyone should keep in mind when talking about species roses. One person’s R. virginiana might be very different from another’s”

I also say this about known cultivars growing on different continents showing some varying degree of differences, eg Peace, the European grown as to the Peace grown in the USA.

Rugosas do ok here but they do benefit from a little protection from the summer heat.

It will be good to see how the Ozzie R virg seedlings go in the winter. This year I have put some Therese Bugnet into mine.

Who knows what circuitous genetic paths our respective plants of R. virginiana and R. carolina have taken…that’s one thing everyone should keep in mind when talking about species roses. One person’s R. virginiana might be very different from another’s. That’s why I’m trying to grow out large seedling populations of both and select for health and thornlessness.

How do rugosas do in your climate?
Joe

Makes sense but would you have a citation for this?

Makes sense but would you have a citation for this?

Of course I have citations:

Cyclopedia of American Horticulture (1906) pp 1569-1570
Future Roses for the Prairie States
J. L. Budd
“The Russian R. rugosa as introduced from Russia by the writer is divided into two very distinct classes. The one from the Amur valley in North Central Asia is a very strong, upright grower with lighter colored bark, stronger thorns, thicker and more rugose leaves, and larger flowers than the Japan type, but its hips are smaller. The one from Russia in Europe is spreading and pendant in habit. When 4 ft. in height it has a spread of top of fully 6 ft. Its leaves also have a darker shade of green than the Japanese type, and its buds are longer, more pointed, and show between the narrow folded petals shades of rich red and crimson. Its clusters of flowers also differ, as it has four to five flower-buds together, while the Japanese type has only two to three. In addition, we now know by trial that both these Russian types may be grown successfully two degrees farther north than the Japanese R. rugosa.”
http://bulbnrose.x10.mx/Roses/breeding/Budd1906/Budd1906.html

Gardening 5: 266 (May 15, 1896)
Hybrids Of Rosa Rugosa
“The Russian Rosa rugosa now known as R. rugosa var. Regeliana is far handsomer in habit, in leaf and color of flower, and is hardier and much better able to endure drouth than the Japan type.”

Our Iowa Friends are on the right tack. The hardy plants from Japan are very beautiful, but we find that most of them are surface rooting and must have considerable moisture in summer. What we need most is a hardy race that will endure the drouths of our parching summers, and if the good people of Iowa can help us in this respect they will do us very great service.
http://bulbnrose.x10.mx/Roses/breeding/BuddHansenRugosa1896b.html

The Canadian Horticulturist 7(12): 286 (Dec 1884)
ROSA RUGOSA
"Since that time I have had an opportunity for studying the trees and plants of the great “East plain” of Europe, and found the Rosa rugosa in public and private collections in Northeast Austria, Poland and over Russia, from the shores of the Baltic to points east of the Volga, where the rainfall does not exceed ten inches per annum. Nor was it confined to the single red form coming to us from Japan. The varieties differed in size and shape of the leaf, length and number of spines, size of bush, and above all in the size, color, and perfection of flower. The varieties known as “Rosa rugosa flore pleno” varied from half double to one as perfectly double as our best perpetuals.
http://bulbnrose.x10.mx/Roses/breeding/BuddRugosa1884.html

Regarding the Japanese form, Andre (1873) wrote, “According to Siebold and Zuccarini (Flora Japonica, vol. xxviii. p. 66) the plant is called in Japan Hama-nasi, literally, “the waterside pear,” in allusion to its pyriform fruit. Bunge says that it grows on sandy soils on the banks of streams, and that he has seen it cultivated in the North of China.”
http://bulbnrose.x10.mx/Roses/breeding/AndreRegeliana1873.html

In addition, I put together a list of papers dealing with the Russian Rugosas and their hybrids.
http://bulbnrose.x10.mx/Roses/breeding/RussianRugosas.html

Rosa rugosa ‘Germanica’ is derived from the Russian Rugosas. No doubt ‘Hansa’ is another member of the group.

This backcross inbred line I did in 2014, now at its second growing cycle and 17 months old , has produced flower buds. Growth is displaying very good vigour as well. 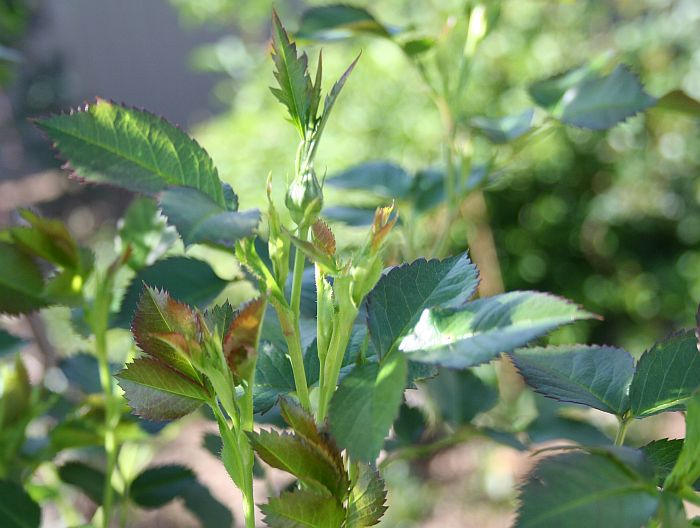 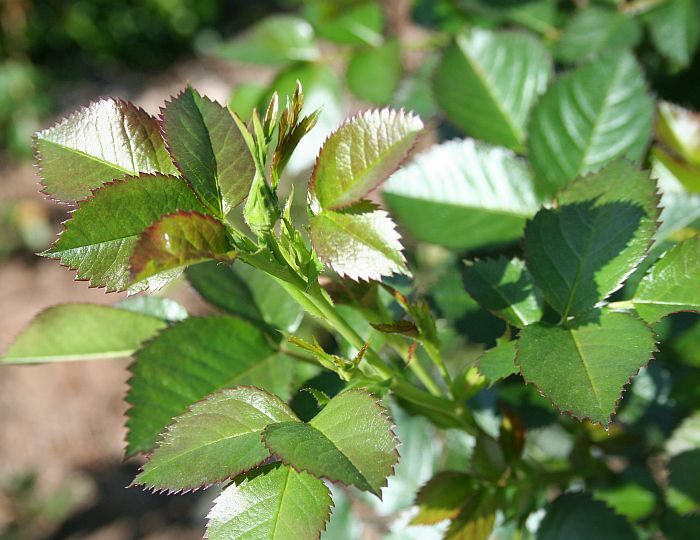 Yes. Would like to see the blooms. Congrats on these Warren

Good job…
What characteristic you try to fix in the new plants, through this backcross?

Thanks Rob, will post pics as soon as they appear.

Marc, I am just trying to get a more pure line of this cross.

Here is the first of the blooms, although not quite opened yet, its not spectacular. On the other hand growth and health is superb.