Anyone recognize this rose? Note the leaf structure.[attachment=0]unnamed.jpg[/attachment] 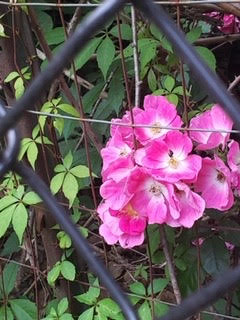 You may already be aware of this, but I just wanted to point out that in your photograph, the vast majority of the leaves are from a species commonly called Virginia creeper (in other words, the vast majority of those leaves don’t belong to that rose). Virginia creeper is native to much of the US and Canada, and grows as a vine in thickets and woods, twining up trees. (It is similar in this way to poison ivy, with which it is sometimes confused–although the two species are NOT closely allied taxonomically.) It’s also partial to growing through fences, and I think it is occasionally (although rarely) used on purpose as a native groundcover, the downside being that unlike many groundcovers, as soon as Virginia creeper reaches something that it can climb, it probably will do so.

If you follow the rose and the Virginia creeper both down their respective stems, I’m confident that you’ll find them to be separate plants.

As for what variety the rose is, I unfortunately don’t have any idea. Hope someone else on the forum is able to help with that one.

Looks with the long style, a Rosa multiflora.

I have a rose that looks like this. It is a found rose called Phaleonopsis.

My first thought was that it looks like the old Brownell floribunda Nearly Wild.