I’ve been so focused on playing around with species crosses, that I’m not very well schooled at all on best Hybrid Tea parents. I thought there was an old article that listed some suggestions on the RHA home site but I couldn’t find what I thought I’d seen before.
Essentially, I’d like to choose a few “main stream”/“old school” Hybrid Teas without a lot of species of shrub influence. I don’t expect them to be particularly disease resistant [obviously] but I’d rather steer clear of the worst offenders.
Color doesn’t much matter. And I don’t care if they’re many decades old. I just want a few fairly fertile ones that can be counted on to give me lots of typical Hybrid Tea seedlings.
From some info gathering searches of old forum posts, I’m thinking roses like Lagerfeld, Lynn Anderson, Elina, Peace and Chrysler Imperial might be good fits. Anybody have any other suggested workhorses???
Thanks in advance, Tom

Tom I would try Gemini, I have produced some good seedlings with the classic HT shape , but I stopped because there not my cuppa tea. The health of the seedlings seemed pretty good also. One thing though , cross it with something that has alot of petals, as Gemini can be a bit short in numbers.

Hi- There have been a lot of improvements in HTs since the “old school” ones were produced. Have a look at Eliza and Beverly from Kordes and Frances Meilland from Meilland among others. If you start breeding with the old cultivars, you’ll miss out on about 40 years’ worth of advancements in vigour, health, bloom size and beauty.

If you are looking for good hip producers, I highly recommend Crimson Glory, Dame de Coeur, Love, Pope John Paul II, Senior Prom, Stephen’s Big Purple, The 777 Rose (if you can get it), and Winter Sun. These are my highest hip setters by far (I’d also throw in Pink Princess but I’m not sure how close to R. wichurana you want to get to).

If you are looking for good pollen producers, I highly recommend Alec’s Red (sometimes as hip too), Curly Pink, Black Baccara, Elina, Gemini (never can get a hip on it here), Golden Fairy Tale (highly recommend and can produce hips), Midas touch, and Tahitian Sunset.

I have gotten a lot of the hybrid tea forms off of these ones (and more) and while not all produce exceptionally vigorous or healthy offspring all the time, I have noticed that if you pair them with the right parent (even within the class) I can get some really stunning results.

What Donald said! I would think one of the more important considerations would be what is sufficiently cold hardy where you are. I’ve gotten some very good health and beautiful foliage from Secret’s Out, the white sport of Secret, crossed with Fedtschenkoana and my 1-72-1Hugonis. This is new growth on the Hugonis cross. 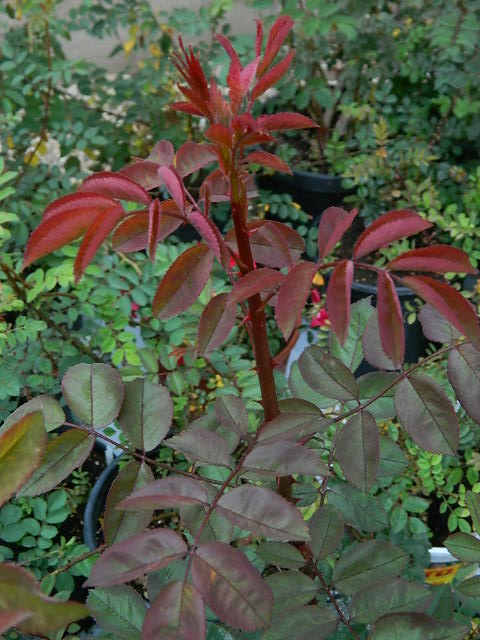 Thanks a million guys!!!
So many great suggestions I’m going to have a hard time narrowing down my order list.
I have to admit, I wasn’t even aware of how much improvement has been made in the classic Hybrid Teas in recent years.
Thanks again for the great suggestions, Tom.

Hi Tom, I grew Kordes Perfecta, HT Pink blend, 1959 40 years ago in OR and CA. When it produced blooms they were perfect. Introduced with great fanfare and won many awards. it was a cross of Golden Scepter X Carl Herbst. Does anyone have an idea of its viability and what could be done to perfect it further, such as to have more bloom production?

I grew Sutter’s Gold, HT 1950 and liked it. It was an all-time winner. It was crossed from Charlotte Armstrong and Signora.

I have been trying to mine the good qualities of Lady Hillingdon Tea rose, yellow blend, 1910. It has long pointed deep apricot semi-double flowers. Crossed from Papa Gontier X MME Hosta. It has a nodding pleasant bloom. I crossed Lilian Austin with Lady Hillingdon and it has nice apricot blooms and fair disease resistance.

I don’t know what zone you are in for hardiness.

Thanks John!
I should’ve added that I’m in western Maryland (zone 6B). Our winters are typically cold enough that roses like moschata, laevigata and bracteata are iffy. But Chinas like Mutabilis and Old Blush seem perfectly happy.
I once had a ‘Fragrant Cloud’ HT going for at least 5 years without any apparent trouble from the winters and my remember my mother used to grow ‘Peace’ and ‘American Beauty’. It seems that disease pressure is the biggest threat here for many Hybrid Teas, which is one of the big reasons why I’ve concentrated more on species work.

Hi Tom, I grew Kordes Perfecta, HT Pink blend, 1959 40 years ago in OR and CA. When it produced blooms they were perfect. Introduced with great fanfare and won many awards. it was a cross of Golden Scepter X Carl Herbst. Does anyone have an idea of its viability and what could be done to perfect it further, such as to have more bloom production?

I’m also a fan of ‘Kordes Perfecta’. I can’t find a reference, but I recall reading (long ago) that this variety is difficult to propagate by budding because of its pithy stems. Still, it is worth the effort.

Also long ago, I read a paper dealing with the use of Cobalt 60 to induce mutations in ‘Peace’ and ‘Perfecta’. ‘Peace’ sported all over the place while ‘Perfecta’ was relatively resistant. No explanation was offered, as I recall.

I’ve gotten some really nice seedlings from Lynn Anderson, Louise Estes and Diana, Princess of Wales all crossed with Marilyn Monroe pollen. Killer thorny though. Also, I second Gemini as a good parent.

Your Zone 6B is only slightly colder than our zone here in the Willamette Valley, Oregon. I know how disheartening it is to pick various hybrid teas and see them get decimated by black spot and not thrive. In the past 30 to 40 years many hybrid tea roses have come and gone and not held up to disease pressure.

Noteworthy hybrid teas and shrub roses that I have grown that have held up to disease and are not too tender are listed below. They could be used for further crossing.

• Morning Has Broken, shrub rose by Heirloom Nursery, yellow
• Darlow’s Enigma, multiflora rose, lack of thorns, healthy
• Pride of England, by Harkness, hybrid tea, long-stemmed red
• Rosemary Harkness, HT by Harkness
• Tournament of Roses
• Summer Wine, by Kordes, climber I have used to good effect
• Shock Wave, Floribunda, bright yellow
• Radiant Perfume, vigorous, fragrant, a newer yellow HT
• Black Ice, by Douglas Gandy, good health
• Julia Child, yellow, has done good here
• Sheila’s Perfume, Harkness
• Gruss an Aachan
• Happy Child, by David Austin, lemon yellow
•
A very good rose for me the last 10 years as far as disease resistance has been Raspberry Stripe, a large shrub rose that I crossed from Brave Heart x Scentimental. I could send you some hardwood cutting of it in the fall if you would like to try it and send me your address in an instant message.

Thanks again John!
I’ve had good luck growing Darlow’s Enigma and Sheila’s Perfume here too (although lost DE to the dreaded Rose Rosette Disease).
I’ll make note of those others you’ve suggested in case the ones I’ve picked out aren’t available (from Roses Unlimited).
Thanks also for the offer of a cutting of your Raspberry Stripe. I’m trying really hard to limit myself on too many new roses, but if I can get another spot prepared for it, I’ll be back in touch.
Best wishes, Tom