Great new in depth paper on self-incompatibility in roses

Dr. Pascal Heitzler has been working with R. arvensis as a model species in roses for many years. He made selections out of the wild and generated hybrids between the different forms and followed segregation of various characters. He joined forces with other researchers to better understand how self incompatibility works in roses versus other Rosaceae species and they have made great progress. Their new paper is in a very prestigious journal and is open access for us all to freely be able to read.

I believe l am badly misinterpreting the abstract … can you confirm as 98.5 % of the details are beyond my baseline?

I walk away thinking l am reading some roses have a built in genetic mechanism in pistil and pollen to preclude self-pollinations by itself, and very closely related roses of near exact same gene map ( aka, degradation of tube).

"Ways of Achieving SC and Its Role in Hybrid Breeding
Maintaining “pure” (highly homozygous) lines is also essential for hybrid breeding. Since SI species inherently favor outcrossing, achieving homozygosity may be hindered by the intra-specific crossing barrier itself and inbreeding depression. Maintaining SI parent lines with consistent properties may also be problematic. Consequently, breeders have used or considered a range of techniques to bypass SI including mentor pollen, bud and stump pollination, pollination of senescent flowers, irradiation, and high-temperature stress (De Nettancourt, 2001). Chemical treatments have also been employed. For example, treatment of pistils with NaCl or CO2 suppresses SI in SSI plants (Kučera et al., 2006). In vitro studies show that mixture of divalent zinc and copper ions inhibit S-RNases so it is conceivable this could suppress SI (Kim et al., 2001) (Figure 1A). More recently, a so-called “in vitro nursery” system has been suggested for SI crops. " 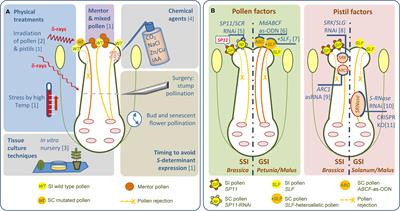 Self-incompatibility (SI) mechanisms prevent self-fertilization in flowering plants based on specific discrimination between self- and non-self pollen. Since this trait promotes outcrossing and avoids inbreeding it is a widespread mechanism of...

Example of study specific to roses:
In 1986 P. Cole and B. Melton published a paper which investigated the ability of rose pollen to fertilize flowers on the same bush ( .Cole, P., Melton, B., J. Amer. Soc. Hort. Sci., volume 111, pages 122-125, (1986). The diploid species were all highly self-sterile. None of the 23 diploid specimens exhibited over 4 % fertility and 18 of the 23 produced no self-set seed. They also studied the fertility with pollen from another plant of the same species and found that the diploid group was 50 times more cross-compatible than self-compatible. For roses of higher polyploid level 12 of the 16 studied were no more self-compatible than the diploid group.

Thanks Henry and David … I never picked up on my basic too broad misapplication and use of “selfing” and compatibility. Great knowledge transfer in my opinion.

From the paper (thanks very much, David):

Does this mean, then, that efforts to overcome the SI system by bypassing the stigma and style (through direct injection of pollen into the ovary, say) are doomed to fail on account of the ovary itself expressing the SRNase?

I ask because I’m planning to do this with some Prunus work I am doing shortly.

Many long years ago, I read about self-incompatibility and the multiple sterility alleles. I believed it all because … it was a book. For example, in Elements of Genetics (1950), Darlington and Mathers wrote, “And, although closely related, the 60 cultivated varieties of Sweet Cherry examined must have over 20 allelomorphs.”
http://bulbnrose.x10.mx/Heredity/Darlington/DarlingtonIncompatibility1950.html

But then some decades later, I happened upon a paper written by Heideman (1895) on the multiple breeding systems in Prunus Americana varieties. Not a sterility allele in sight. These are the Dichogamous Group (Proterogynous, Proterandrous), Heterostyled Group (Long-Styled, Short-Styled), Bisexual Group (Gynodioecious, Andromonoecious) and the rare self-fertile Hermaphrodite.

By being aware of the structural differences among other species, he raised hybrids that had evaded other experimenters.

"Pollen of C. avium var. on P. Besseyi invariably proved sterile; reciprocal crosses set fruit, but they failed to germinate, the seed containing only a trace of the aborted ovule. When I finally used the pollen of a proterandrous form of P. Besseyi on a short-styled form of C. avium fertilization was effected and developed a normal fruit, the seed of which germinated and produced an undoubted hybrid. The reciprocal crosses of the same varieties failed to fertilize a single ovule out of over fifty crosses made. "
http://bulbnrose.x10.mx/Heredity/Prunus/Heideman/HeidemanPrunus1895.html

Once I was aware of this aspect of Compatibility/Incompatibility, I was able to find more reports.
http://bulbnrose.x10.mx/KKing/PrunusSexualSystems.html

There are also reports on the subject of defeating incompatibility with pollen mixtures.
http://bulbnrose.x10.mx/KKing/PollenMixtures.html

Babajanyan: Inbreeding Rye (1948)
Rye, as is known, is a strict cross-pollinator; isolation leads to utter sterility, and inbreeding to depression in the progeny. In one of the experiments that we have been conducting at our Institute for the past three years and more, self-fertilizing rye plants in isolators were given the pollen of spring wheat. In a number of cases this led to a heightened grain formation. In 1948 one plant by this method showed 20% of grain development compared with only 1% in the case of pure inbreeding; another plant showed 22% of grain development in the presence of foreign pollen and 0 under pure inbreeding; a third plant showed 24% and 0; other cases showed 33% and 2%, 39% and 0, 48% and 0, and 54% and 0. This is the highest figure we have obtained. Thus, such strict cross-pollinators like rye, which produce no seeds with ordinary inbreeding, produce them under the influence of foreign pollen.
But this is not the most important, although this in itself is an indication of the diminution of the depression of self-pollination. The important thing is that in plants produced in this way the depression of inbreeding is diminished, and in many cases it disappears in the progeny.