It’s going to be a first bloom and the tepals are almost flower like they are so big- and the rose does look awfully green.

It would be lovely if the sepals remained in proportion to the flower, Jon. That would give it the “high shouldered look” written of by Graham Thomas. The Weigand “HP” Symphony has it and it reminds me of the silvery pink flower sitting on a green, lacy doily. Very decorative.

That was a bad picture that I took on impulse under artificial light.

This is a better one I just took under natural lighting. Supposedly these are both Carefree Beauty seedlings (I think you can see why I say supposedly).

Looking into the center, it looks green all the way to the core.

I was a bit confused when you said ‘tepals’ but apparently you meant it.

Looking into the center, it looks green all the way to the core.

Are they ‘vegatative’ (as with viridiflora) or are they true petals that happen to be colored green?

Hi Jon and All:

What wonderful opportunity to learn something new. I looked up ‘tepals’ and this is what I found:

Tepals are elements of the perianth, or outer part of a flower, which include the petals or sepals. The term tepal is usually used when all segments of the perianth are of similar shape and color, or undifferentiated. When different types of organs can be distinguished, they are referred to as petals and sepals.

Undifferentiated tepals are thought to be the ancestral condition in flowering plants. Amborella, which is thought to have separated earliest in the evolution of flowering plants,[1] has flowers with undifferentiated tepals. Distinct petals and sepals would therefore have arisen by differentiation, probably in response to animal pollination. In typical modern flowers, the first whorl of organs forms sepals, specialised for protection of the flower bud as it develops, while the second whorl forms petals, which attract pollinators.

In some plants the flowers have no petals, and all the tepals are sepals modified to look like petals. These organs are described as petaloid, e.g. the sepals of Hellebore.

Undifferentiated tepals are common in Monocotyledons. In tulips, for example, the first and second whorls both contain structures that look like petals. These are fused at the base to form one large, showy, six-parted structure. In lilies the organs in the first whorl are separate from the second, but all look similar, thus all the showy parts are often called tepals.

Usage of the term ‘tepal’ is inconsistent - some authors refer to ‘sepals and petals’ where others use the word ‘tepals’ in the same context.

Don, I don’t know. To me they appear to be a mixture of both (with the tips being somewhat vegetative). It looks like it will open to form a true flower (and be a semi-double so far). I’m curious about it because I already know that I’m going to breed with it because it has superior foliage. It would be awful if it carries this trait strongly to the progeny.

Larry, I got it from here too:) 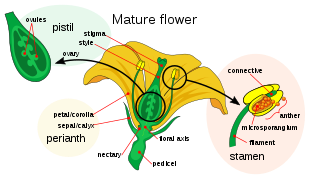 A sepal (/ˈsɛpəl, ˈsiːpəl/) is a part of the flower of angiosperms (flowering plants). Usually green, sepals typically function as protection for the flower in bud, and often as support for the petals when in bloom. The term sepalum was coined by Noël Martin Joseph de Necker in 1790, and derived from Ancient Greek σκέπη (sképē) 'covering'. Collectively the sepals are called the calyx (plural calyces), the outermost whorl of parts that form a flower. The word calyx was adopted from the Latin c...

“However, the term tepal is usually applied when the petals and sepals share the same color, or the petals are absent and the sepals are colorful.”

I’m going to breed with it

Can you? Does it have anthers and/or stamens?

Don that is a good question. I certainly hope so- we shall see.

Interestingly enough, some of the seedlings from this cross are already on their second blooms so I would guess that they would be remontant. They are all extremely variable from each other.

I have had one so far that I could smell the first bloom all the way across the room (and it was a small tiny white single) with that very distinctive, sweet QD fragrance. It has interesting foliage as well, rather glaucus. Not half bad (although the green thing does have the most superior foliage from the bunch)- AND it does have the strong Queen of Denmark fragrance- and it had all its reproductive parts as well.

A couple of the other sister seedlings exhibit odd leafy appendages above the stipules. I wonder what these are called? I can recall seeing this on some other plants but not a rose.

it has already bloomed once. non-exciting pink, not fragrant. Currently has two more buds on it.

There is also another rose from this bunch that has atypical sepals as well.

Yet another clue that proliferation is a genetic malady.