I must be really bored today to be taking and posting pictures of hips… I guess in celebration of fall.

This is the first hip I’ve EVER seen on Lady Elsie May (OP, lots of diploids growing around her though)

Last but not least, rugosa

This is a great post Jon. I love seeing pics of hips, it shows how much time and work has been done to get that hip to maturity, 4 months is a long time. Here are some pictures of some of my hips. 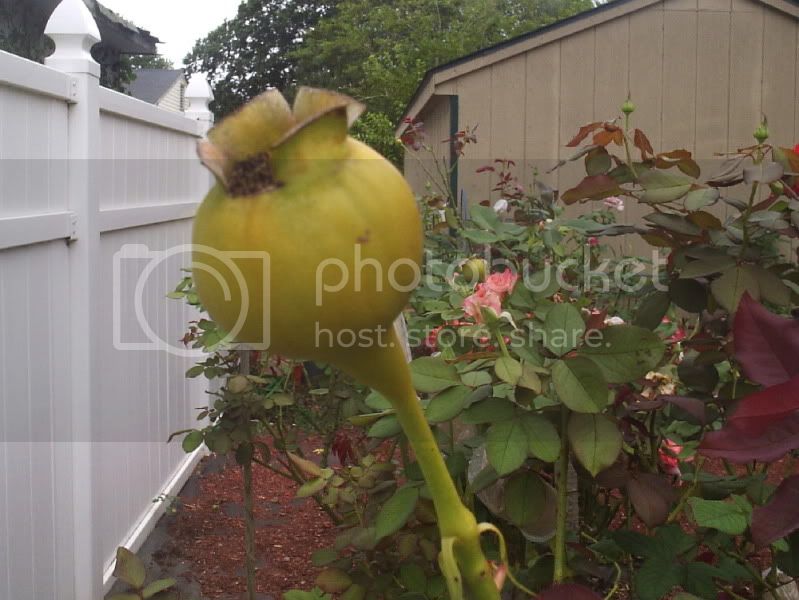 Well here is another…how do you put more than 1 picture into a post? 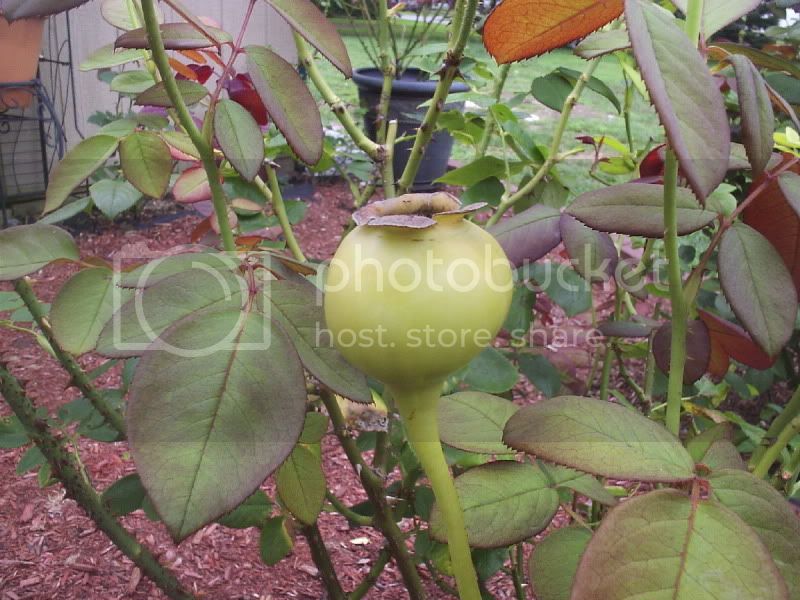 In the link below Jim Sproul explained how multiple photos can be added anywhere in the one posting, using photobucket images.

Thats great, thanks so much George.

no prob…and again thanks sooooo much Jim, this informaion you shared has saved me so many unnecessary multiple postings (and hence time) recently!!

Could you try to post the Moores Striped Rugosa hip again? I have never seen a hip form on my MSR, they all wither and fall off. I assumed it was female infertile so only used it as a pollen parent. I have not gotten the pollen to work an any diploids, but it has taken an several tetraploids. I have half a dozen seedlings this year with only one blooming, but with stripes. All are very small, probably from the miniture that was MSR’s seed parent.

Jeanie, you have me wanting to buy Rainbow Niagara (enabler). Also. the architecture and foliage look great on your seedling. I can’t help but think that your trimming of your sepals says something about your personality

But, the deciduous Azaleas are ready to be planted.

I also managed to finish the last cross of my gardenia project this year.

Paul, I was hoping that would catch someone’s eye- that’s why it came first. It was a first for me also for MSR and it took me by surprise. The hips have been on there since the beginning of the season though. I have two hips on Queen of Denmark from mixed yellow tetraploid as well, so my reasoning is that next year I’m going to try MSR with QoD… mainly as a foliage cross.

LOL, well I hope that is a good thing. I trim the sepals because I notice that water gets up under them and sometimes can rot the hip and also spiders and bugs hang out in them too. I like spiders but not on me…eek!

Wow, you are quite the plant breeder…I like all your pictures of the different seed pods you have. I just took some seed pods off of my daylillies and here is a picture of some seed pods just starting on my impatients. They come up every year for me from the seeds that fall from these pods. I have tons of them. 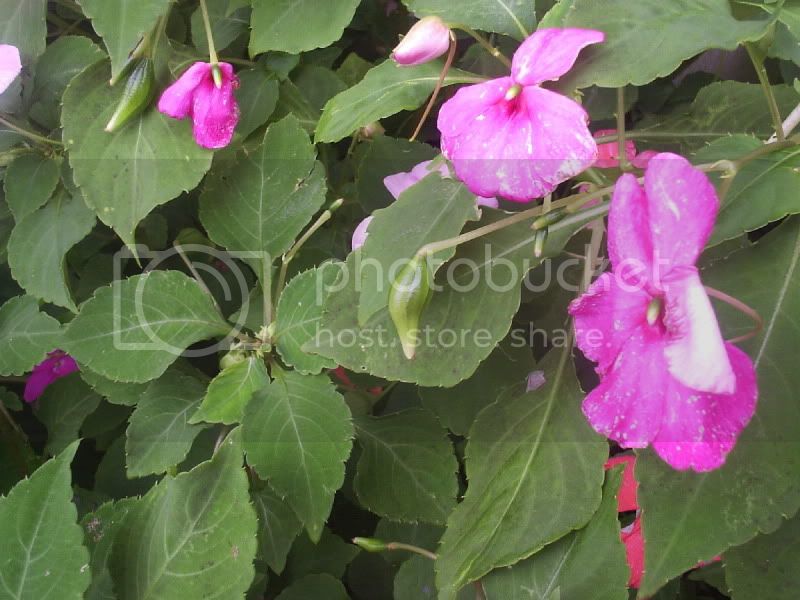 For some reason the first picture of the MSR hip didn’t load this morning, but it’s there now again. I’m just curious, what was in your “mixed yellow tetraploid” pollen? I may try something similar on MSR next year. Your rugosa hips look just like mine, the ends of the canes and hips turned brown. I’m not sure what causes that.

my mixed yellow consisted of mainly South Africa and Golden Showers, later on I added (my) found climbing yellow

Jeanie, your reasoning on trimming the sepals makes perfect sense…

I, too, also have impatiens that reseed themselves annually.

(growing in with a hippeastrum seedling)

So a mix of pollen from Florabundas and Large flowered climbers. That should be a very interesting cross. It’ll fun to see what becomes of it.

I don’t have much for florabundas but I have a couple of climbers, Altisamo and Dublin Bay that I could use.

Here is a hip of one of my yearlings. It is a OP seedling of David’s mixoploid rugosa. Which is a plant that he tried to double the chromosomes on, but it only worked on two of the three cell layers. Though he managed to double the layer that produces the flowers and gamates. That plant hasn’t been very vigorous but has produced hips. I collected the hips from it in 2008 and now I have four OP yearlings that look like pure rugosas, so I don’t think they are hybrids. I figure they should be full tetraploid rugosas, but I haven’t confirmed that. They are more vigorous than their mother. 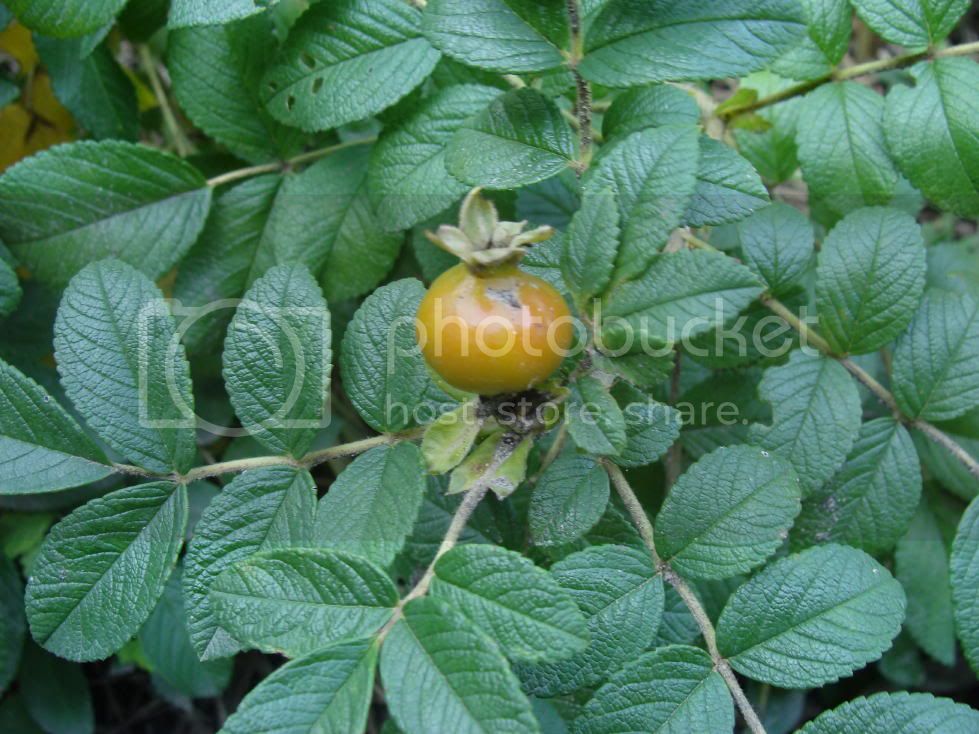