Can anything be diserned by comparitive size of hip

Any truth to the story that the largest OP hips on a rose are often selfs? Or to put it another way, the smallest hips (less seed production if all other things are comparible) are more often likely to be pollinated by a rose that is not the closest relative or is the wider cross. This is a discussion that I was having with a rosarian, and we both agreed that there probably were some roses that produced seeds almost with any cross–the so called ‘whores’ of rosedom that seemingly do not have many lack of compatibility problems with wide crosses. If this is true, then harvesting the smaller (less seed production) hips on a rose for OP hips might be a good strategy when looking for random ‘lucky crosses’? Just a thought.

Possibly…there are a few roses here which set large selfs regularly, but when I pollinate them, usually with weird stuff, the hips are significantly smaller and contain many fewer seeds. An interesting question!

I assume you mean on one particular CV. In that case, for some CV, yes the size is relatively proportional to # seeds contained. I have a lot of crosses giving only 1-2 seeds and they are definitely a good deal smaller than those with many on the same CV. But if the hip wall thickness is constant, and fairly think, even a single1/8 inch seed may give a hip 3/8 inch across while you could probably put 6 seeds in 1/2 inch (hexagonal close packing?). And the next layer would have a whole lot more for a further small increase in overall size. I’m too lazy to do the maths but think of a marble surrounded by marbles all round and then a layer of clay as thick as the marble.

Sometimes one seed may be 10 times bigger in volume than 10 seeds in the same hip. For instance on Silver Moon each lone seed may be near 1/4 inch across and 4-5 seeds will be packed in the same volume. Actually I should be saying achene, the hard-walled seed container. The seeds themselves may not vary so much.

The past week or so I’ve been collecting a lot of hips that are drying up. Most have only 1-2 seeds. Either they get enough resources to mature the seed quicker, or the seed lacks the hormone production to sustain the hip. Later hips will generally be bigger and fuller, but that doesn’t tell which alternative is the cause.

This question gets to the heart of cross-compatibility: chromosomal homology.

If this is true,

It is true. All other things being equal, the greater the genetic similarity between maternal and paternal gametes the greater the likelihood of a successful cross. You can’t get more genetically similar pairings than selflings.

harvesting the smaller (less seed production) hips on a rose for OP hips might be a good strategy when looking for random ‘lucky crosses’?

First, a lot of things interfere with pollinations besides genetic inhomogeneity so the strategy is really a numbers game in that you need to survey large cohorts for it to be efficient.

Second, because their gene pool is so highly introgressed, if your stable is full of modern roses then chance hybrids are likely to be very nearly selflings. Prospects of generating improved varieties this way are therefore not good.

From a labor perspective you are probably way better off doing emasculations and pimping pollen yourself randomly.

Then there are always the exceptions that ruin the rule. Right now the fattest hip in my garden is from Rosa moyesii on Sacred Heart. 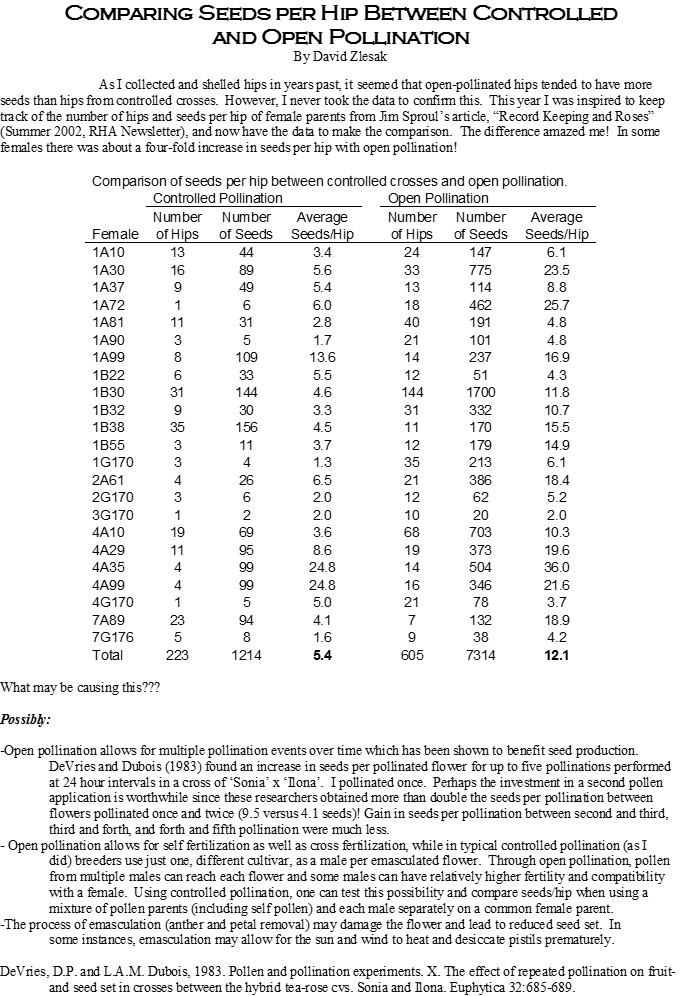 I believe this subject came up because I picked up a late hip from Pink Drift a few yrs ago, which was small and only had one seed in it. It germinated and the seedling was clearly an open cross with ELLE which is directly across the driveway from each other. The flower was incredible,very dbl, peachy color, ELLE fragrance, and did not survive because of vigor issues. A couple of yrs ago I had several hips on Gemini (pretty much not self fertile at all) each develop with only one seed each. Of 5 seedlings,two where fairly healthy and I kept them. One is clearly a cross with Dream Come True which is right next to it but seemingly not very pollen fertile itself. It has developed into a very nice rose. Right now I notice the bright yellow Rosa wichurana hybrid has 3 hips, two pollinated with Lady Hillington that are small and one OP that is 3 times as large. I am getting a bit tired of growing out Rosa wich. seedlings that are taking their fair share and about 5 others of available space when I remembered this tidbit about OP and selves. Probably not worth the time and space in this case. Larry–I get what you are saying, sometimes either the seed size or the genetic make up of the plant causes it to produce hips of similar size with no relation to the amount of seeds inside. In Modern roses both Gemini and Midas Touch tend to do this. And many are totally relational.