Anyone breeding for fall color?

I was wondering who was working with fall foliage in mind? How is it going?

Any recommendations you would have for breeders in that direction?

I wasn’t planning initially for fall color, but the second season some seedlings were a bit bigger and strung out like a hedge the impact was pretty significant. Now I’m wondering if it is something I should include intentionally, especially as it may coincide with my more cold hardy varieties anyway.
Here are a few pics of color, seedlings & breeders.
Therese Bugnet grandchildren showing color
Martin Frobisher seedling
a very purple seedling
Wasagaming turning gold
Henry Kelsey showing an assortment of color 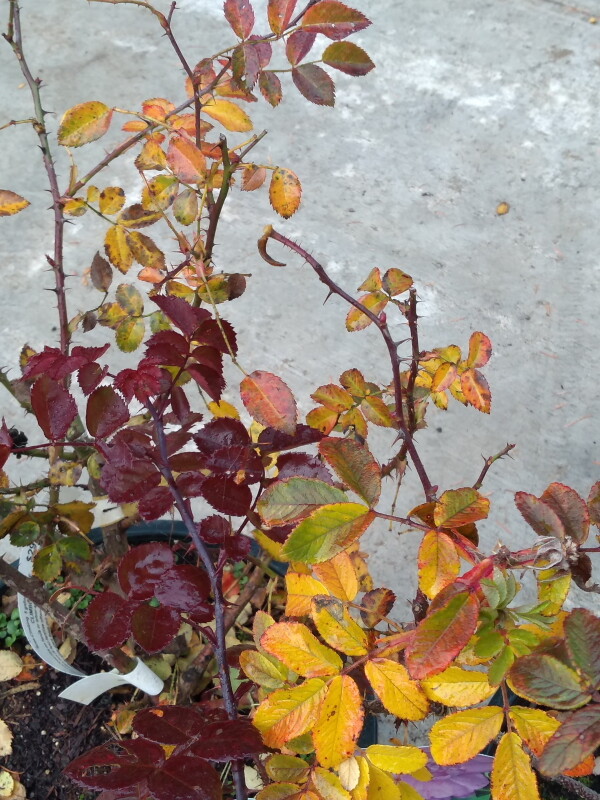 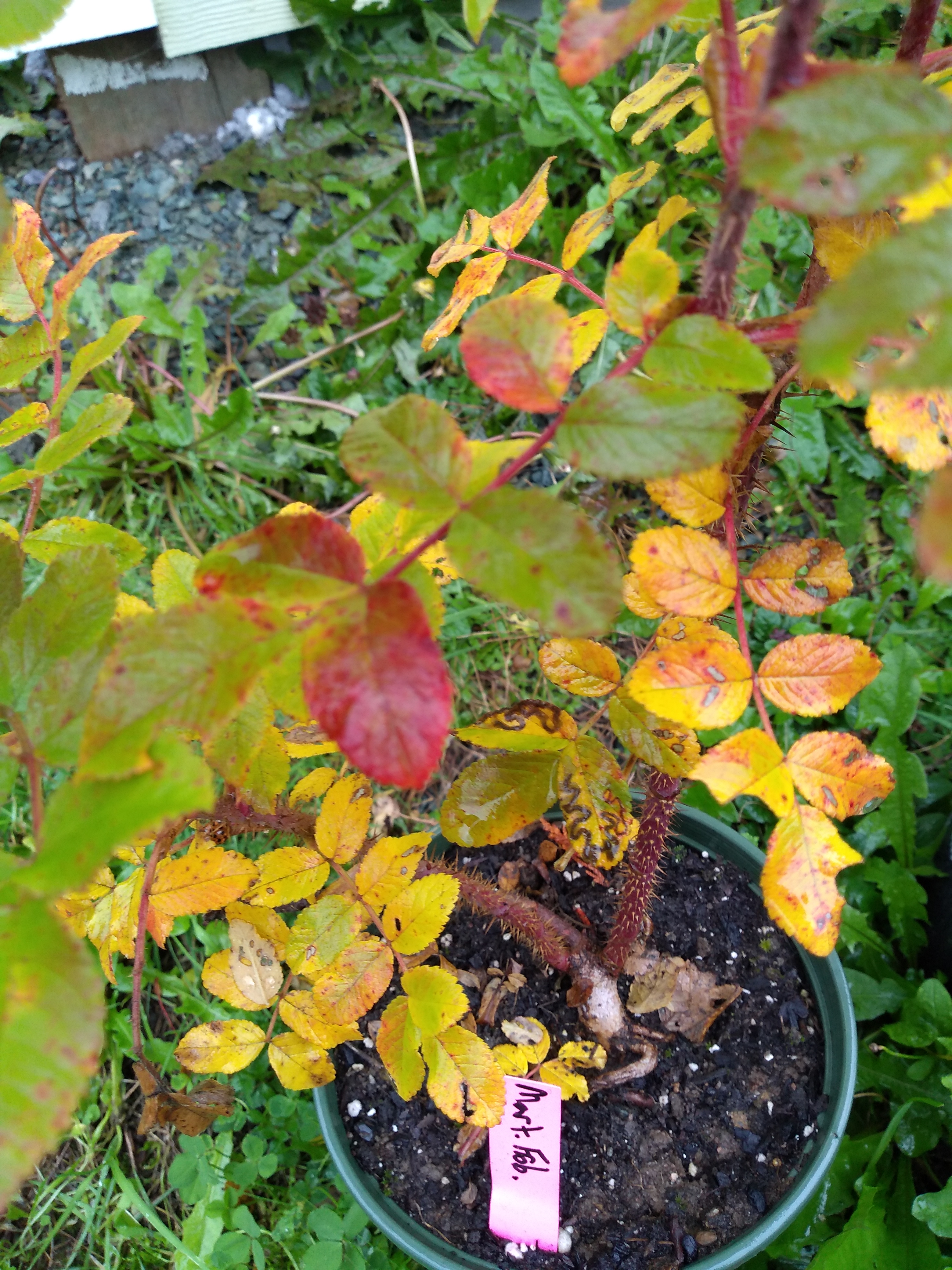 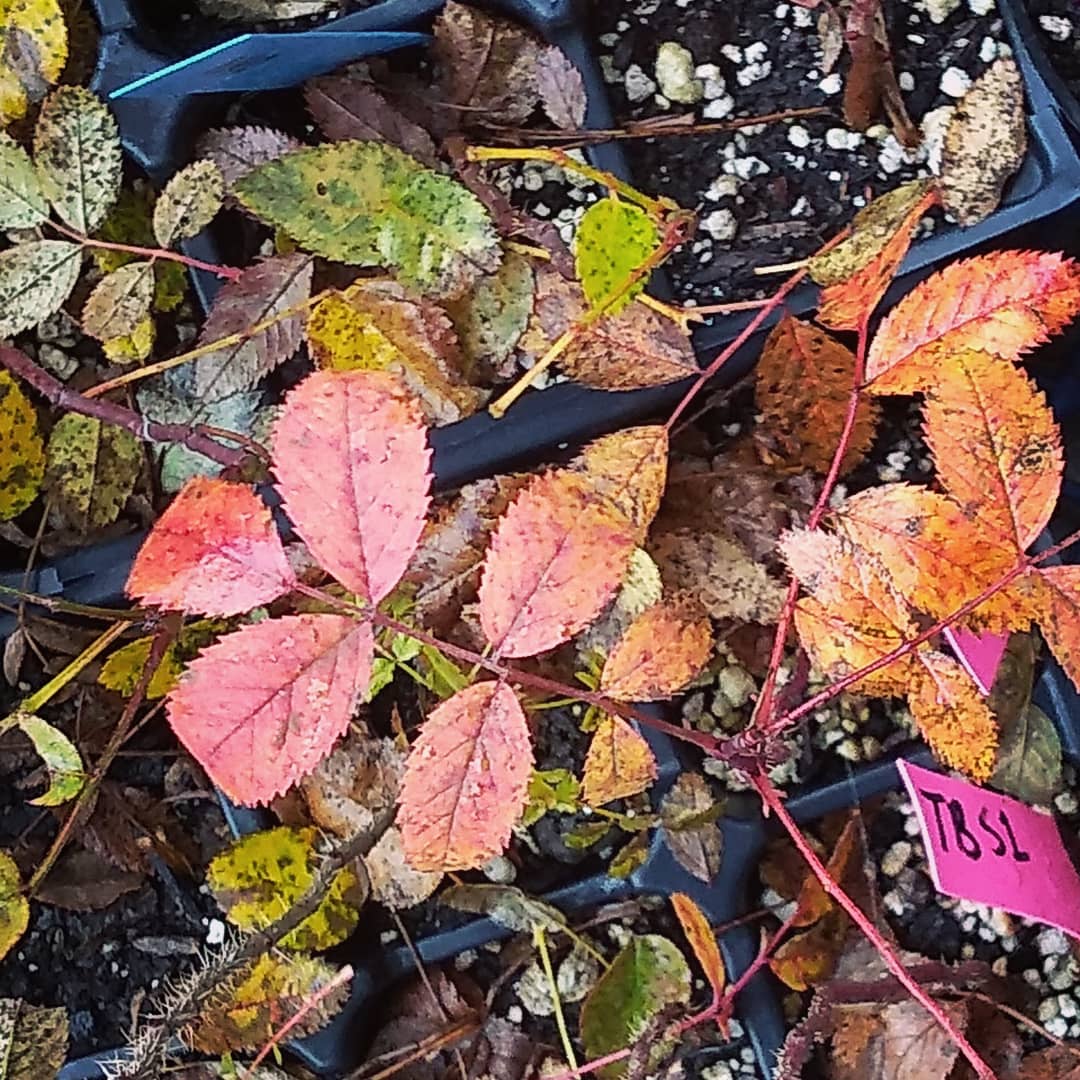 I’ve considered it for sure after seeing some brilliant examples. I have a china rose, mutated from Fabvier, and called Old Gay Hill after the TX community where it was found, which has brilliant red-bronze foliage, and I briefly had MORsoucrest (died when I attempted to move it alas) which had nearly black fall foliage, so deep was the bronze it acquired. One of the first roses I grew (and still a favorite) was Pink Pet (acquired as Caldwell Pink) that veered toward a nice purpley burgundy in cooler weather. After seeing and appreciating those, I had wanted to play with glauca in an attempt to focus more on foliage. Likewise, I at one point aspired to work with the glaucous leaved roses. (I have worked with neither.)

It’s not always the bloom in and of itself that matters, but the way the foliage sets it off. A beautiful bloom on foliage that does not set it off well might fall flat while a strong contrast with the foliage can make an otherwise dull bloom become the center of attention.

If I remember correctly, rosa Glauca also goes vivid red for me in the fall. It was hard to observe this year as we had a sudden cold before leaves could change colour.

My soil is rather alkaline, not sure if this affects fall leaf colour.

Trudeau is certainly colorful foliage. I noticed the parentage is not listed. How fragrant is it? Also, no descendants listed. Do you know if anyone has
used it successfully in breeding?

Glauca is certainly a thought. Appears to have produced some roses. Some fragrance, how much exactly? And does that pass on to offspring,
or combine well with fragrant roses? Obviously that is complicated, but anyone had experience with it? Would it be a better alternative to say Woodsi? I am looking to develop several breeding lines incorporating species genes as well as Old Rose genes.
THanks for the input Phillip & Roselynn.
Duane

Can’t give input on breeding R. glauca, but it has garden value as a single specimen. Prolific bloomer when left alone (pruning shears put away) and sets copious quantities of hips that turn a nice burnt umbra for winter. Give it lots and lots of horizontal and vertical as it wants to be a tree and makes a big statement. Grown my examples for 15 years plus and requires “de-caning” when its past garage eves. An excellent healthy rose of value in my opinion. Also grow Louis Riel.

Glauca has the canina meiosis/unbalanced chromosomes issue (3+1). I’ve been attempting to use it as pollen on diploids as a source of low thorns. I don’t think Ive been successful, others say its pollen is quite promiscuous so may be a difference in what we have here in Australia vs elsewhere (also with the glauca vs rubrifolia species name situation makes importation of seed into australia a no, I checked). There is apparently an imposter glauca here so that may be what I have. I also get few to none hip set which is counter to others around the world.

I noticed glauca was used as seed parent some. Is there a big difference using it as seed parent or pollen parent? A reason to use it one way as
opposed to the other? Vigor and health sound good. Hips for added color also a bonus.
Duane

For me R. glauca is not healthy at all. Defoliates from blackspot or cercospora, I don’t know which.

Defoliates … wow!!! … should of mentioned its a “mountain” rose … why it probably likes my rain shadow east slope foothills environment … gall wasps favour it

Duane, I find Michel Trudeau a unique rugosa, its leaves are more pointed and matte than other rugosas. The fragrance is strong and clove-like, similar to Therese Bugnet. My understanding is that it was a seedling discovered growing in a garden, which is why there is no lineage. I have some open pollinated seedlings from it in the ground. I did a few intentional crosses with it this year with some hips upwards of 70 seeds each. It appears to be self sterile for me. It has continuous bloom for me, where it had a bit of a stronger first flush, then 2-4 blooms every day until the cold came. Hardly any winter kill and bloomed on time, considering the month long cold of Feb 2019, which set the season back for most of my garden. Not sure where you are located, but I was surprised to even find this rose, I got it from Sunnyside garden nursery in Calgary AB a few years ago before they shut down.

Any rose cultivar or seedling selection having ‘Marie Bugnet’ in its parentage when hybridized or selfed should produce a wide selection of characteristics in the progeny because the pedigree of this cultivar, unlike many other Rugosa cultivars, is quite complex.