Any ideas which rose this is?

Last year I ordered R.fedtschenkoana from Hortico and I had my doubt that was what it was. Well there are no doubts anymore. It just bloomed and it’s definitely is not R R.fedtschenkoana. I attached a photo of it. I haven’t figured out how to post more than one photo at a time or I would have posted more. I added a link to my Photobucket page for a few more photos. Any ideas what this could be?

It was very healthy last year when it was surrounded by PM and BS but showed very little or no disease. Any suggestions would be great. 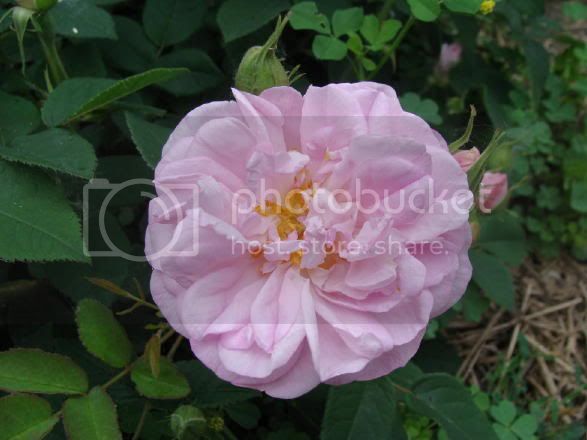 It is a Damask, of that I’m pretty certain. If it starts to rebloom in the Fall and has an excellent “old rose” fragrance, then R. damascena bifera is a very real possibility.

I don’t understand how Hortico keeps its customers. They have a terrible reputation for selling misidentified/mislabeled older varieties.

Paul, have you seen Kim Rupert’s R. fedtschenkoana hybrids? They are fascinating.

I was leaning towards a Damask like Belle Amour. The leaves look similar to Charles de Mils, but I didn’t think it was a Gallica as there aren’t to many Gallicas that light of a pink. I don’t have a very good sniffer because of allergies, but I can detect some fragrance.

I know a lot of people have had trouble with Hortico, but this is the first time they screwed up and order of mine. It’s because they have a large selection and good prices that people keep buying from them. There were only a couple places to get R.fedtschenkoana, so that’s why I bought it from them.

I have looked at Kim’s hybrids and they are fascinating. They are the reason I decided to get R.fedtschenkoana.

I’m with Paul, this one reminds me greatly of damascena bifera.

Fragrance should be strong and buds resinous.

I forgot to mention that I’ve got seedlings using damascena bifera as pollen parent. It also descends from fedtschenkoana.

You have to use a really easy seed parent. Remontant seedlings for me are fairly weak. I have one so far non-repeat blooming seedling that is vigorous but shows some sign of susceptibility to Powdery Mildew.

Hortico probably keeps flow from several factors: huge stock, massive variety, cheap plant costs. I am guessing they sell in bulk. This, combined with fairly limited competition, has probably helped them. However, I am seeing more premeir Canadian rose outlets opening up, so this may change.

As someone that is currently in wholesale, and has dealt with Hortico, it seems that their “system” for keeping track of information is largely antiquated in relativity to the amount of line items and sources they must keep track of.

I guess time will tell. If it repeats this fall then I’ll know that it is damascena bifera. If it doesn’t that doen’t mean it’s not. Because the growing season is pretty short here, roses that repeat in fall in other areas sometimes don’t here.

Since it was healthier last year than the other OGRs that I have, both Charles de Mils and Henri Martin were covered in PM last year, I was thinking of putting some pollen on it to see if it takes. Using its pollen is a good idea too. I’m sure I could find something to put it on.

R. damascena bifera will occasionally set viable seed, but rarely will it take pollen from anything modern.

That’s too bad, the pollen I wanted to use on it is from an R.arkansana seedling I have with distinctive coloring. I haven

My R. fedtschenkoana is blooming right now. Would it help to have some pollen? It would be no problem to collect some for you.

That would be great Julie, I would love some. I’ll try to email you with my information, it doesn’t always work.

I should have asked how R. fedtschenkoana has performed for you. Has it been healthy and hardy? How is the re-bloom on it? Have you noticed a scent to the foliage?

I just sent an email to you, if you don’t recieve it shortly let me know here on the forum.

Email me please. I have a plant to offer you that might be of use to you.

It’s interesting to think about what attracts people to certain roses. Kim Rupert offered me fedtschenkoana and tried to get me enthused about it at least 10 years ago.

I looked at the growth habit, the prickles, caught the smell of the blossoms and just couldn’t bring myself to take it on.

I’m sure it didn’t help that Kim’s specimen was several years old and had a tremendous rat’s next growing in the middle of it.

As politically incorrect as it might seem, I couldn’t help thinking what it desperately needed was a match on long pole. (Burning it to the ground would have taken care of the rats and allowed it to regenerate.)

This was before I learned fed. plays such a large role in the make up of damascena bifera.

If anything, the color of the foliage is what attracts me most to fed.

I think Kim got some seedlings with purplish blue foliage out of it which are really distinctive looking. If one could capitalize on that feature while shrinking and improving the growth habit of the species, I think you’d have something really attractive. Blue foliage would look great with a mauve blossoms. Blending it with glauca seems logical.

Now that I think of it, putting the pollen of one of my repeat blooming damascena bifera seedlings on the repeat blooming glauca seedlings seems to be a possibility. I was sure what I was going to do with that pollen anyway. It does look to be fertile from the few attempts I made this season.

It’s a long range project no matter what we do.

"Blue foliage would look great with a mauve blossoms. Blending it with glauca seems logical. "

Funny you should say that: I have put Kim’s ‘Orangeade’ X R. fedtschenkoana hybrid on R. glauca two weeks ago. And yes, Kim’s hybrid does indeed pass on its curious blue-green foliage. I have the seedlings to prove it!

Crossing Fedtschenkoana with Dottie Louise, my Basye hybrid with Orangeade, is what created the burgundy, purple, nearly turquoise and very blue foliage. Orangeade intensified all pigments throughout the plants. Second generation seedlings from them continue the blue and burgundy foliage but are too small to bloom yet, though several are beginning to eat the surrounding plants and out grow their five gallon cans. Amazing how the degree of prickles varies all the way from hips to canes. Kim

Don, sorry, I only found this question this evening. Yes! There are LARGE plants from January 2009 germination out back right now. Then, there are some smaller and a few really small ones from the same batch. Things like 0-47-19, 1-72-1, Glad Tidings, Cherry Parfait, Carol Nichole Miller, Purpurea (China), and my Mutabilis seedling Rayon Butterflies have all germinated plants with Dottie Louise X Fedtschenkoana. More this year are under soil from Purpurea and 1-72-1, as well as one solitary hip from Gold Badge with Fedtschenkoana pollen. Some have remained deciduous with a few finally ever green, here. The more deciduous the plant, the more highly scented the foliage. I’m amazed how variable the 1-72-1 crosses are. Actually, all of them are widely variable from one seedling to the next, but those from 1-72-1 have the more modern looking foliage, fernier, just better quality of foliage. The growth habits of two in particular impress me more of something like Tigris’ habit than either plant. No, it is not possible they contain any Hulthemia as I haven’t messed with any of them, just maintain them because I enjoy them.

Let me know if I can help you move any of these along by embryo culture.